How to join 2 cables together with fishing line without putting knot in cable?

I want to tie both cables together, but without a knot, kind of "join" them as if glued together side by side, no knot in the cable.

The cable is quite thin, and I'm using fishing line, the knot has to really grip it so it stays tight. Cable has a plastic casing, like a bicycle lock, so it has flexibility and give, the fishing wire can squeeze it to grip.

So it's kind of like joining 2 extension cords, without knot in the cord. 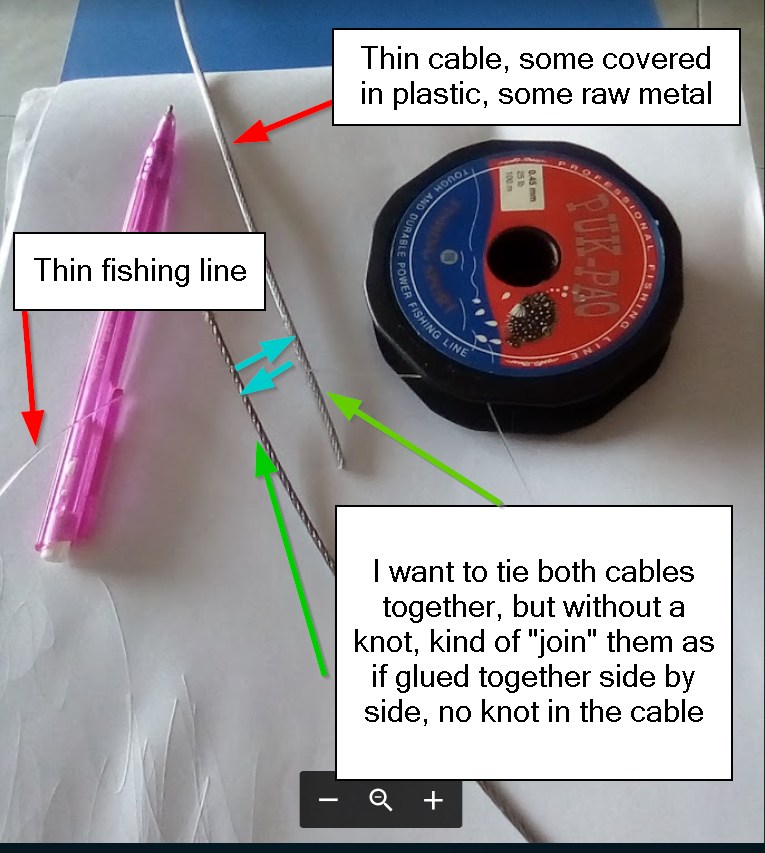 If tape is not an option and it has to be fishing line I'd recommend some version of the round lashing, or steigersjorring in my native Dutch. It's normally used to connect wooden poles, for instance to use them in a tower higher than the longest pole. The version I think would form the strongest connection here is the "Dutch method", where you start in the middle of your line, and at every wrap around you secure your previous work. 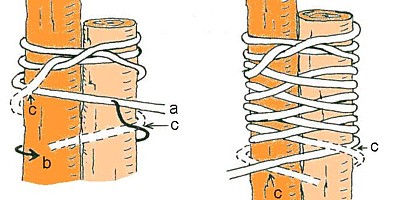 Keep in mind that picture was drawn to make the process of making the lashing clear. When actually making it you want to make sure your lines all tidily line up next to each other without any space in between. If there is room for them to slip later your lashing will not hold well.

If that version doesn't work because you keep getting your ends mixed up and tangling (making small knots is hard) the French-German methode further down the same page or the version I find when googling in English could be worth trying. They start at the end of the rope, so there isn't quite as much to keep track off at the same time. But especially for that last one you might need to tie it off with some extra clove hitches or constrictors to make sure the fishing line does not slip. 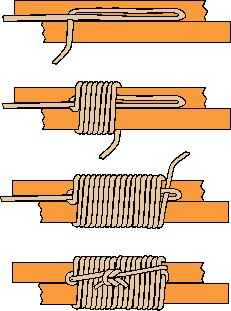 A similar English-American method can be viewed at animated knots by grog.

Given how thin fishing line is you are probably going to end up with quite compact lashings. Make at least two or three of them along the length of the overlap between the cables for the best connection.

Adding an actual droplet of glue at the end securing the fishing line to itself and the cable as well as helping the cables stick to each other might actually be worth it as well, if this is meant as a permanent connection. A thing that can help as well is ramming some elongated object between the poles and the lashing, like a lucifer shaft. The goal is to tighten the lashings by pushing the slack out of it. But this will add a bit more girth to the overall combination.

12
How can I tie a bowline knot with one hand?
1
Climbing-line “rope-thimbles”, unsure how to utilize these (got several 1/2" 'steel rope thimbles' with my climb-rope!)