How strong of a magnet is needed for magnet fishing for assorted metal objects?

Magnet fishing is where you take a magnet and go fishing for metal objects (usually trash) in ponds, canals or lakes.

I think this would be fun and would a good way to clear out some of the garbage from the canals,

How strong of a magnet would one need?

The practical answer is "Much less than you can easily get from a decent magnet." My original, more technical answer is left below since it is the answer to the question as asked, but the useful answer is...

You can get a magnet much stronger than needed to pull up objects such as your knife example. You can lift much more using a small, cheap magnet.

I found a magnet on Amazon.com which is actually advertised as a magnet-fishing magnet. It is listed as having a 500-pound pull-force, is only a few inches across, weighs only a few pounds, and it even comes with an eyebolt already in it so you can easily tie to it for magnet-fishing. It cost about $50, but there are weaker ones for cheaper.

In fact, at 500-lb-pull, I wonder if your biggest problem will be trying to get objects unstuck from it when you want to remove them from the magnet. So going with a cheaper, weaker one is probably a good idea.

Not necessarily. The pull test is a laboratory test under ideal lab conditions. It is the breakaway force required to separate a given magnet from a flat 1018 steel plate. See attached MDFA Pull Test Standard.

When lifting an object with a magnet, many factors can affect the ability of the magnet to lift a given weight. These factors include: surface finish of magnet & object, flatness of magnet & object, coating on either surface & acceleration of lifting motion.

So you need a magnet will a pull force that is greater than the weight of objects that you want to pull up, especially since your objects will not always be flat steel lying horizontally. However, it is probably safe to assume the above-mentioned tests were performed in air, and that the magnet would likely hold more under water. Still, as a rule of thumb, I would go with the tests to be safe and get a magnet with a pull force greater than the maximum weight you would like to be able to capture.

If you want to pull an object out of the muck at the bottom, that could be a lot harder. Depending on what an object is covered in at the bottom of the water, you might not even be able to pull it out if you were down there and tugging on it directly, so this is highly variable, too much for me to go into. Consider what it is like when you get a foot trapped in the mud or in the muck at the bottom of a pond or similar. If you had a long pole to jam down and release some pressure, that might help.

If you want to be able to attract objects without having to touch them directly (ie: at a distance), that requires a lot, lot stronger magnet. Magnetic force is inversely proportional to the cube of the distance, meaning that the pull drops drastically even at very short distances. So you will need to be essentially dragging the magnet right over top of the object, making contact with it. If you want to avoid direct contact and snag something even if you miss it by an inch, or worse yet a few inches, then get a very much stronger magnet.

Can I buy a magnet by pull weight?

I did not know much about buying magnets, and whenever I have bought one at a store before I have always just held it up to something and said "Yup, feels strong enough for what I want." But it appears that you can indeed buy them by pull weight.

For example, the second hit for me on the Google query is a 2.4-pound-pull magnet from Wal-Mart that comes in a pack of 2 for $2.14.

Anything beyond that is probably beyond a simple TGO answer and would require a question on engineering.SE, and they might close it as too broad since it would depend on the buoyancy of the object if it is not solid steel/iron all the way through, and depth that you are fishing at since buoyancy involves not just the mass/volume of the buoyant object but also that of the medium it is weighed in, and water weighs more the deeper you go.

So it sounds as simple as deciding what the heaviest object is that you want and buying a magnet of at least that "pull-weight" strength. So for small objects like knives a very cheap 1-pound pull-weight magnet sounds more than plenty.

If you look for fishing magnets that have an attachment for rope (usually an eyebolt) they start from approximately 100 lbs (45kg) and go all the way up to 1,200 lbs (544kg) with values around 3-400 lbs being the most common from what I could see.

The other thing mentioned when learning about this is that the values stated are under ideal conditions which would be thick, flat and dry metal with no mud. Lakes are not ideal conditions and the items are often rusted and or curved.

It's not that you are going to be regularly pulling out 300 lbs things, but rather that more attraction helps in the less than ideal circumstances.

From what I am reading 4-500 lbs is plenty just don't get it stuck to metal things like bridge trusses above water.

Given your clarification ("up to small knives") a 10mm diameter by 5mm thick rare earth magnet would work. I've got some and they'll lift my Swiss army knife.

However I'd go for a bit bigger, and buy one with a hole (cheap on ebay) to make fastening easier. I tested a 10x5 with a hole, lifting a small sheath knife. it can easily lift it by the (slightly extended) tang or one of the rivets on the sheath. It could take the weight attaching to the blade through the leather sheath but tended to slide to a rivet. 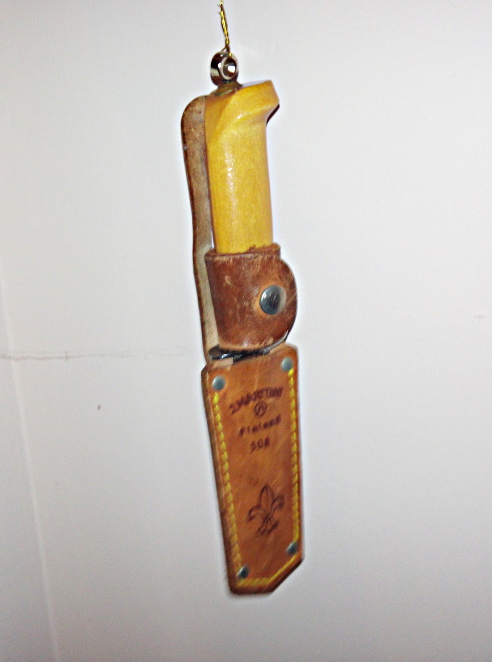 (apologies for the motion blur -- it's effectively a pendulum)

If I was doing this, I'd use one (or two back to back) from an old hard drive -- the voice coil magnets are strong and can often be obtained for free.

One thing to remember is how fast the force falls off with distance. A magnet that will pull itself to a knife from a few centimetres away is likely to break your line if it finds a car.

Not the answer you're looking for? Browse other questions tagged conservation magnet-fishing or ask your own question.

1
What are the pros and cons of single vs double sided magnets for magnet fishing?

5
Is it likely that decimation of its suburban forest habitat would cause a black bear to wander into a busy city if it wouldn't otherwise go there?
4
What is the survival rate for fish restocked via airplane?
8
How can we be the most respectful to a moose when photographing it up close?
16
Can I use a trail camera to identify a roadside litterer?
1
What are the pros and cons of single vs double sided magnets for magnet fishing?
4
How to isolate a strong magnet from things it could damage in a small backpack?
5
What makes for good locations to go magnet fishing?