What methods can be used to keep a cooler cold longer?

Keeping the cooler out of the sun and the lid closed as much as possible are some obvious ways to keep a cooler cold longer. There seems to be some truth that adding salt to your cooler can help it stay cold longer, although this may not be a good idea if the food in the cooler comes in contact with the salt water. Are there any other tips that can be used to keep it cooler longer such as the ice type, different packing strategies, etc? 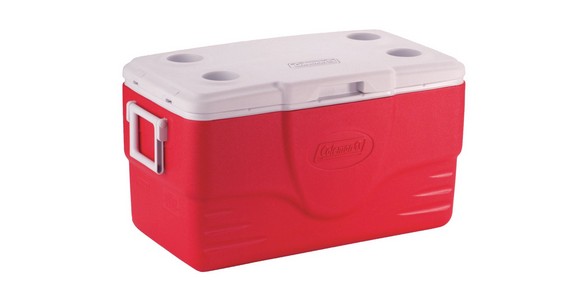 Either obtain ice, or freeze ice packs (the latter are common in the UK, and many campsites will freeze them for you, often for a fee). Larger ice packs will keep partially frozen for 24 hours at moderate outside temperatures, while smaller ones can be tucked in the spaces in a nearly full cool box. If using ice, I prefer to keep it in a wide necked water bottle as not all containers are waterproof. Another solution is to nearly fill a (disposable) water bottle with water and freeze it.

Both ice packs and ice in containers stay frozen a little longer than loose ice, because there's an extra thermal barrier between them and the outside world.

Traditional cooling Shade is good, but not if its an enclosed space like a tent, or if it ceases to be shade at the hottest part of the day. Choose wisely. Tree shade is often good, or underneath a vehicle.

An old method is a wet towel over the top of your container, especially if there's a bit of a breeze. You may want to arrange it so the towel hangs into a dish of water to keep it wet unattended. Evaporative cooling is quite effective (similarly you can cool down drinks by wrapping them in wet cloth and leaving them in the breeze). This is applicable in a vehicle too - an open window or cold air vent blowing over the wet towel would help, or strapping the towel round it and putting it in the bed of a truck (it will dry pretty quickly).

Sitting the cool box in shallow running water is another traditional trick - just so long as it doesn't leak.

Packing tricks You don't want to let ice or ice packs touch your salad or fruit, as they will spoil. However these don't need to be kept as cold. Neither do most drinks. Pack those round the outside and in the middle, pack the things that do need to be kept cold (meat, dairy) and your ice packs/containers of ice.

In a vehicle, additional insulation is fairly easy to arrange. Pack the cool box in between tents/kit bags, and you'll find that by the time you get there the outside of the cool box is quite a bit cooler than ambient, demonstrating that the surrounding materials insulate this. On a warm humid day, you can get condensation between the coolbox and the things surrounding it, so be careful; you might not want to place you sleeping bag there.

When car traveling we freeze pop bottles mostly full of water (2" header air space) A 2 liter (2 quart) bottle takes a fair amount of time to thaw; it doesn't spill and make things soggy; and you have drinkable water in camp.

Another trick: when you can, wrap the cooler in sleeping bags. This will triple or so the insulation and cut down the warming time.

Anything that can be frozen should be frozen -- and not just a bit, use the deep freeze to get it down to -20 or so. That way it's a source of coolth for a while too.

Drinks in plastic soda bottles can be frozen and used like ice for cooling everything else. Booze can be transferred to soda bottles and chilled either to freezing (wine, beer) or until very cold (spirits) Do not use the really thin plastic water bottles for this. They will break when frozen. Beer acts oddly on opening if sufficiently cold: As the gas comes out of solution, the rest of the bottle freezes.

You get much more cooling per pound from dry ice than water ice. However ; 1- It can be dangerous. 2- You must buy it and it may not be readily available, 3- It is much colder than ice and will freeze anything in contact, so, 4- wrap it in insulation ( foam, towels , etc.). I placed it ( with heavy towel wrap) in the bottom of the ice chest and then placed items that would not be damaged by freezing ( meat, butter, etc) nearest it. As I remember it lasted more than 3 days in a conventional ice chest as shown , obviously it depends on sizes and weights. It worked very well , to some degree because I got it for free at my job.

Freeze as much of the contents as practical eg bottled soft drinks, spare water. You can freeze water in a bladder such as Platypus or Camelbak (with lids rather than hoses ideally) - don't fill completely, leave a gap then squeeze air out, leaving only a small air pocket at the filling hole. Or just half fill and freeze, then fill up with cold water shortly before packing in the cooler to make sure you have something liquid to drink without having to wait for everything to thaw!

If you need several coolers (eg packing to go away on a long trip or to holiday destination), try to keep one cooler for frozen stuff and one for the fridge stuff - adding even a few warmer things from the fridge will start to thaw frozen things faster.

If you can't get it in the deep freeze but have plenty of ice packs, use some to pre-cool the box down then swap out for fresh (ie frozen) ones before packing with food and drinks.

When we go camping I generally use this technique to pack the cooler(s). Generally, a cooler like the one shown will last more then a week, if done correctly.

First in goes a layer of ice, on the bottom. Very thin, you want a lot of ice, but you don't want to give up too much space to it. So maybe an inch of big ice cubes.

Next goes in frozen meat and such. Things that are frozen but that will need to thaw before you can cook/eat it.

Pack ice around those items, filling in the extra space. On top of that goes items that shouldn't be frozen, but need to be kept cold. Things like lunch meat. Packing ice around those.

Then at the very top goes things that are nice to keep cold, like drinks. Ice should cover those as well but that should bring you to the top of the cooler.

Here are some things to consider though:

Not the answer you're looking for? Browse other questions tagged gear camping food or ask your own question.

74
Which will keep my food colder longer, draining the melted ice water, or leaving it in the cooler?
13
What mosquito nets can be used while camping?
13
What to look out for when buying used backpacks
9
Can I get away with less advanced food storing methods if backpacking in areas where meeting bears is unlikely?
7
Can heartwood be used for fire?
13
What this instrument is used for?
10
Can cold weather be sufficient to act as a refrigerator?
10
How to keep your beer cold up to 12 hours?
6
Can a cooler (warm weather) sleeping bag be used when combined with a warmer (cold weather) under quilt for hammock camping?
12
How to keep contact lenses from freezing during backpacking in cold temps?