Tent in the rain

I have an MSR Elixir 2 tent bought 5 years ago and used three nights since (a shame I know). In any case, it was used for 4 nights camping in Spain in dry conditions and was an amazing tent.

A few months ago went camping and it started raining. We set up the tent but stayed in a shelter next to our tent until it was time to hit the sack. After I opened the tent, there was quite some water all over our gear. It wasn't a pool but it wasn't something where we would want to spend the night.

The tent is a double wall tent, been stored in dry conditions for the last 4 years of non use.

In any case, my questions are as follows, if someone has any experience with this:

1) Is it possible that this can be caused because of condensation? No one was in the tent since we pitched it until we went back into the tent so somehow it feels odd that the condensation would form in such an amount.

2) The fabric seems to be leaking when I put it under water at home. Is this normal? I live in an apartment and don't have the opportunity to do the hose test, but I took the rain fly into the shower and opened the shower. After a while the fabric started being most on the inside and forming tiny bubbles of water.

3) During the testing I did to the tent, it seems that when I'm pouring water over the tent and the rain fly is touching the pole of the tent, water seems to go through at these spots in large quantities. Is this normal for a tent?

I only owned canvas tents before so unfortunately I have nothing to compare to, but would like to know how you handle these conditions as now I'm afraid to take the tent for my next hike. I emailed the manufacturer but haven't received a reply since August

I managed to find a place to set it up on the roof of my building. I watered it with a watering can and used 10 of those. There was still water in the tent (a bit less than the last time but last time it was exposed in the rain) but it seems that all the water comes from the mid column (the tent has 2 main poles and a smaller pole across that holds the rainfly). All the water seemed to have come in one location and was in the middle of the tent. The rest of the tent was perfectly dry.

What could cause this? Could it be that there is something structural to the tent or is it worth just to give it up? I mean, I haven't had a tent like this before and don't know if this is normal to happen in other tents as well. 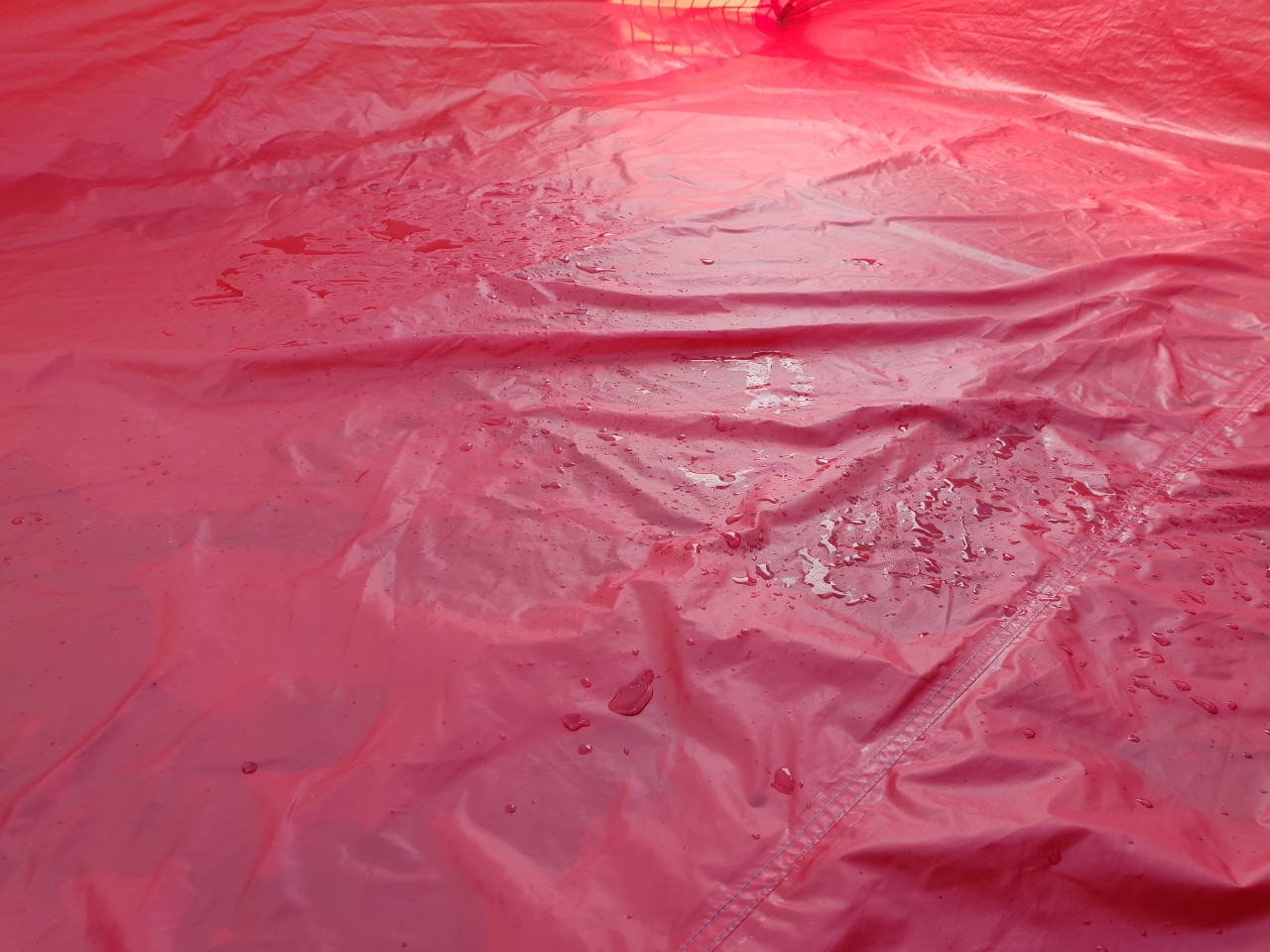 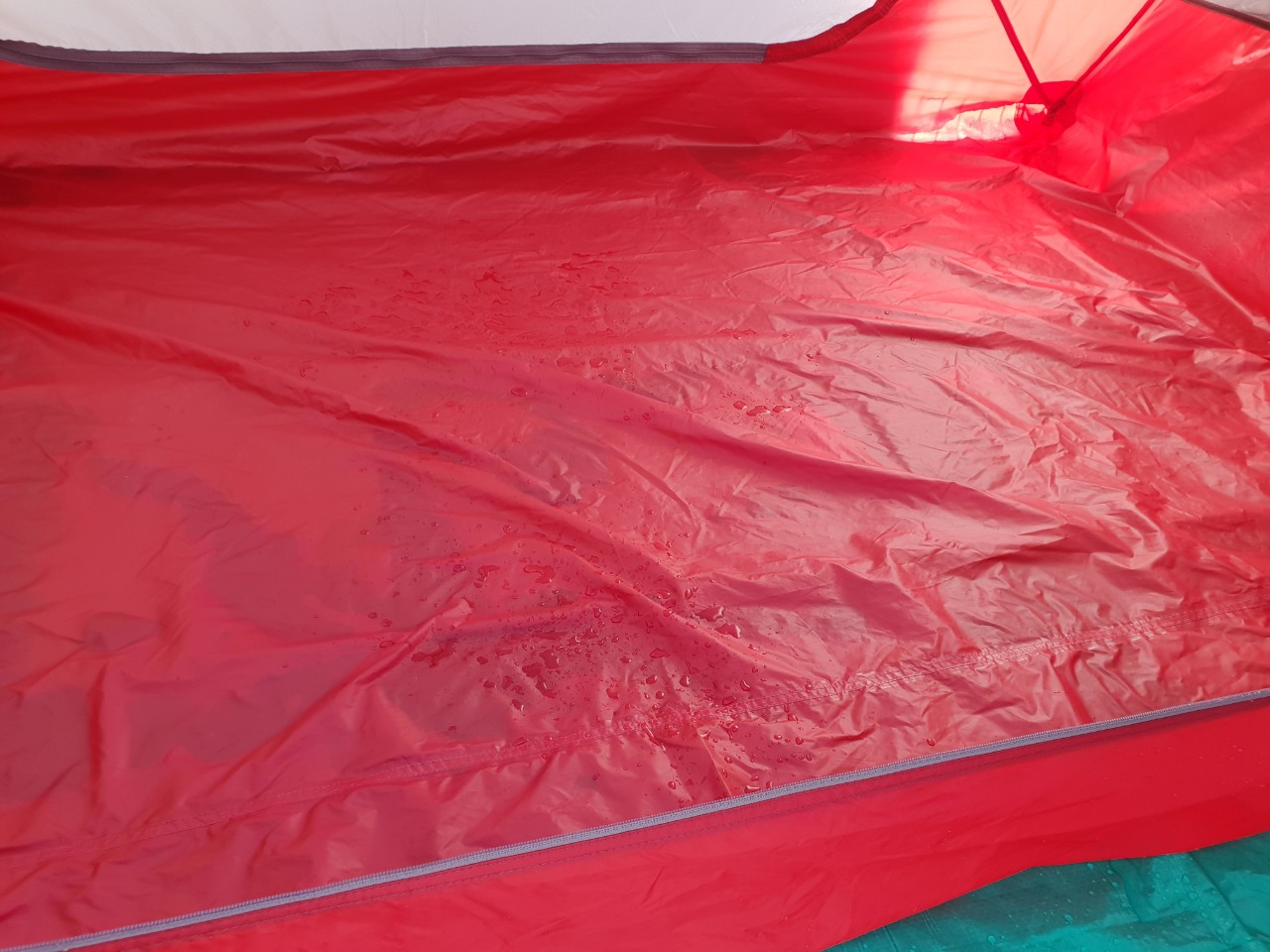 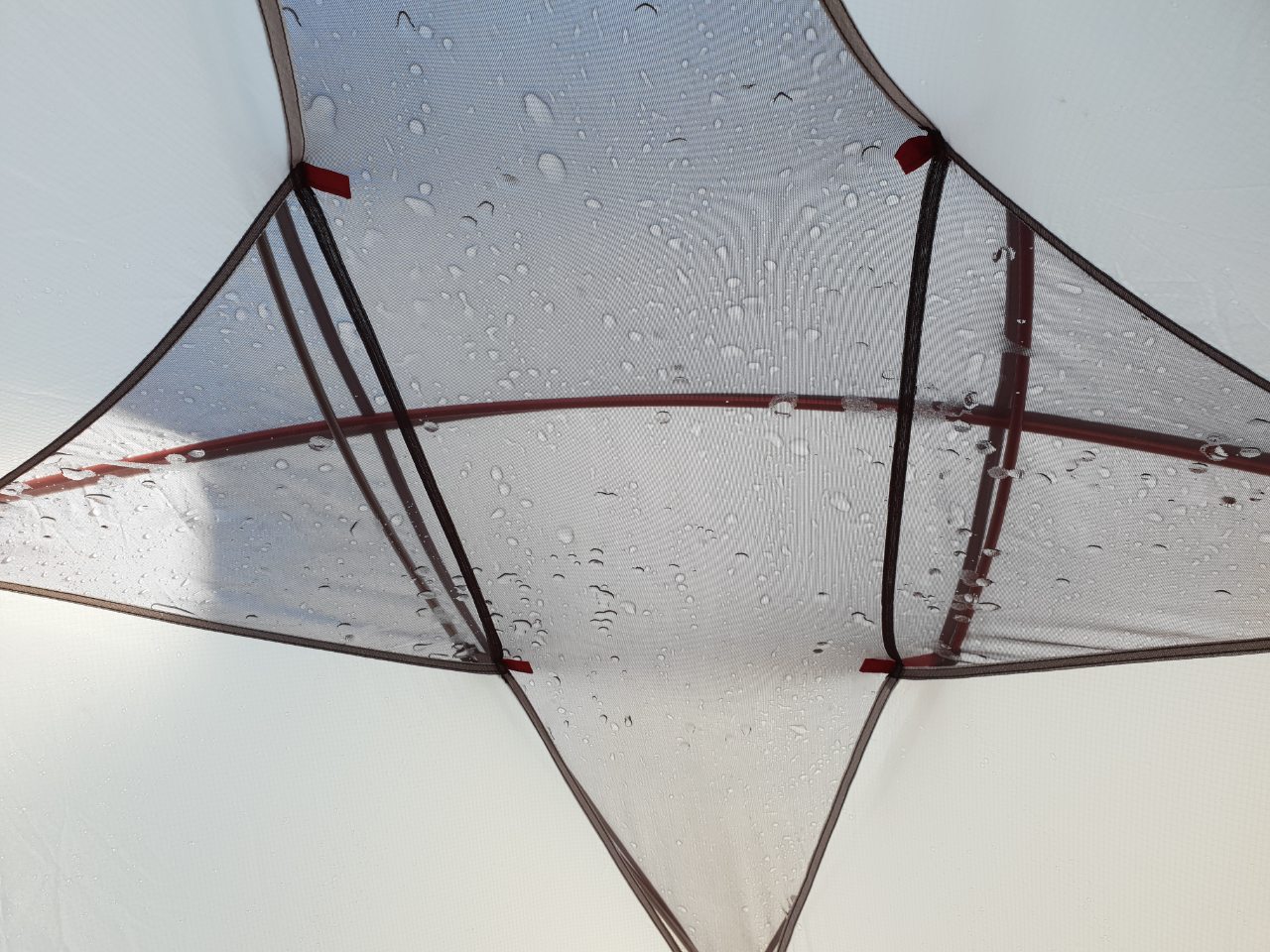 I wouldn't say what you are experiencing is normal - my Helsport tent has been in use for at least 20 years (for weeks and weeks) and it is still working perfectly. Although, depending on the original quality of the tent I have to say that it is sadly possible.

Regretfully the tests you did in the shower aren't telling us to much. While they are certainly not a good sign, it could still be that due to its construction/geometry/... the tent is still quite functional while showing poor water-proofness in shower conditions. It could still be that what you experienced was due to some other effect (condensation could be the issue, the tent could have been set up wrong, ...)

--> The only possibility to really check it is to properly set the tent up outside and test it, either in the rain or using a garden hose, watering can, ...

If your test shows that the tent is actually leaking, there are several ways to proceed from there:

Regardless on how you want to proceed, the staff at your trusted outdoor store should be able to help you out. If worse comes to worst they can maybe recommend a replacement that will hold up better.

1) Is it possible that this can be caused because of condensation?

How wet your gear and tent floor was? If it's just slightly damp on the outside then this is perfectly normal in wet air conditions (think foggy, wet air or long moderate rain, close to 100% humidity). The tent is designed to allow air (and moisture in it unfortunately) to circulate.

If it's anything above slightly damp then the tent probably leaked slightly.

2) The fabric seems to be leaking when I put it under water at home. Is this normal?

Yes, I don't know a tent that's going to stop a direct, slightly pressurized water stream from a shower :). What you describe sounds like normal behaviour to me. As long as you don't observe the water dripping down from the outer fly onto the inner during a rain you're fine.

If you want to redo the test I'd pitch the tent in a park / forest and use a watering can to pour water on different spots of the tent and check for leaks. That way you get a stream of water that falls driven by wind and gravity - closer to what rain is.

3) During the testing I did to the tent, it seems that when I'm pouring water over the tent and the rain fly is touching the pole of the tent, water seems to go through at these spots in large quantities.

Again, this unfortunately is normal. Rain fly leaks really quickly if something is touching it from the inside. This is why it's very important to pitch the tent correctly and make the rain fly taut. If you expect heavy wind or rain it is also a good idea to use the guy lines.

Not the answer you're looking for? Browse other questions tagged camping tents rain rain-gear or ask your own question.

14
What do I need to do to a tent that's been stored for a long time?
11
Is it normal for a double skin popup tent to leak in slight rain?
11
What is the best way to re-waterproof a nylon tarp?

11
Is it normal for a double skin popup tent to leak in slight rain?
25
Is my tent pole a lightning rod?
10
How water proof are these kinds of tents?
3
Would gutters in an impermeable single-wall tent drain condensed water away, and keep the tent comfortable?
9
When rain jackets wear out, do they soak through?
9
Rain soaked leather jacket- how to repair?
7
Can windowless tents be adjusted for adequate ventilation?
12
What are the non-obvious pros and cons of an "Instant Tent" vs. a tent with shock cord poles
6
What could be the cause of condensation on the tent floor?
4
Reattaching Tent Rain Fly Hooks