Do chipmunks hibernate in woodpiles, and, if so, how do I avoid disturbing them when taking wood from the pile?

We have a woodpile, protected from wind and precipitation, under the eaves of our house. Earlier, perhaps a month earlier, I several times saw two chipmunks emerging from, and going back into the woodpile. I also saw a chipmunk drink from a puddle very close to the woodpile. I have not seen them for perhaps a month, nor have I seen any chipmunks at all for that time. I assume they are hibernating.

But, how likely is it that they are hibernating in my woodpile? And if so, where are they likely to be -- ground level or several log-heights off the ground? I have never seen chipmunk traffic into and out of the woodpile in other years.

We expect a lot of snow this winter, and if it does snow a lot, it is very likely that we will have a multi-day power outage. I don't want to dismantle their winter refuge from over their heads, but I don't want to freeze either. We have another woodpile farther from the house, and I may just move some of it into the Mud Room inside the house. But I'd rather not. Advice on keeping both the chipmunks and us warm and happy during a power outage?

From your profile, I think your chipmunk is the Eastern Chipmunk, Tamias striatus. They're the most common chipmunk species in Virginia. That's what I have too, so this answer is based on the behavior of that species.

Don't deprive yourself of heat, especially in a blackout! If possible though, leave at least a few inches of dense wood and brush in that area. Chipmunks don't sleep in the wood pile, and they only give birth in underground tunnels, which are anywhere from 10 ft to 30 ft deep, so you can't physically hurt them. The covered areas are very important though. The chipmunks already chose them to hide the holes which lead to those tunnels.

Once the chambers have been completed, the chipmunk uses dirt to plug the working tunnel. As a result, the new entrance, which is usually located under stonewalls, fallen trees or rocks, goes unseen by predators. Source

Chipmunks gather food as far into the fall or winter as possible. Seeing some pop up for water in the late fall is common, even if you haven't seen much other recent activity. They also come up a few times during the winter looking for more food. (See my pictures below.)

Chipmunks don't truly hibernate. They go into a state called torpor, where their body temperature and metabolic rate are significantly lower, in order to survive the colder temperatures and long periods of time without food. They sleep deeply, but they spend a fair amount of time awake, often very busy. The tunnels I mentioned have different chambers, including food storage; waste and shells from eaten food; bathrooms; and birthing/nesting areas.

Like you, we try to strike a balance with our animals, but don't feel bad about using what you need. Technically, you can't dismantle their house, you can just leave it a bit more vulnerable, and sometimes confusing. If you lose your power, the underground chipmunk will be more comfortable than you are!

This is a girl (she was pregnant) who came up through 2 feet of snow in late February of 2017. The hole was in front of our brush pile. She worked so hard to get up, then decided she didn't like it at all! In the one on the farthest right she has all four feet in the air. There was nothing to eat in the area so she went running back to her hole! She turned around, ran back to the hole, and down she went! The pictures are blurry because she was moving! Click to see a larger version. 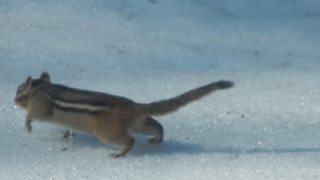 If animals like chipmunks or packrats nest in woodpiles, it's much more typical for them to be down low, closer to the ground.

It would also depend on how it is stacked, if its bigger logs with bigger holes between the logs, then they are less likely to be there.

Just taking off the top should be fine.

Not the answer you're looking for? Browse other questions tagged animals winter animal-behaviour firewood chipmunks or ask your own question.

12
Winter bivvying in the Alps: what is a good temperature rating for a sleeping bag
11
Can you tell the gender of a chipmunk from a distance?
4
Could this year's unusual warmth harm turtles?
5
What are the steps you would go through to teach someone how to split logs?
9
Is there a reason for seeing a lot of roadkill badgers in the spring?
8
How do songbirds and small animals know when there's a hawk in the immediate vicinity?
3
When, and how, is it safe to relocate a burrow of chipmunks without harming the young?
6
How can my neighbor encourage chipmunks to move away from her front-yard flower garden?
10
Is sleeping on a yoga mat better than on an airbed during winter camping?
4
There have been a family of hedgehogs in my garden over the winter and the mother has recently disappeared