What are the practical aspects of using good quality hiking boots (e.g. ones shown below) for climbing? 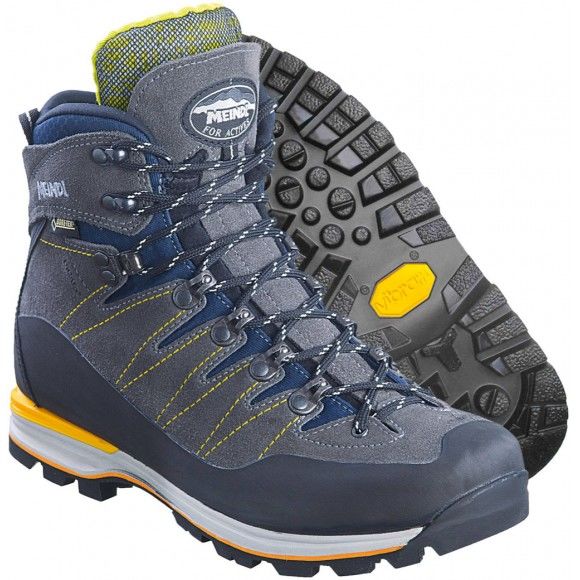 Arguably, an outdoor enthusiast might be involved in various sorts of activities from hiking and camping to climbing to mountaineering. Now suppose said enthusiast is not keen on having specialized gear for every single sub-activity. Can a solid pair of hiking boots serve all purposes? Especially on a backpacking/camping trip where one carries all one's gear on one's back.

I know that paired with crampons or snow-shoes, and the right pair of socks, they are fine for cold and higher altitudes. What about moderate outdoor rock-climbing?

For easy climbs you have quite a good chance to be OK with hiking shoes.

The most important property for a shoe to be usable for climbing is, that you have to be able to stand on contact points so small that only a part of your toes' length fits on them. To achieve that, you have basically two possibilities:

Both shoe types have in common that their sole has a pronounced rectangular front edge which allows to step on rather small edges with good precision.

Other types of shoes, such as trainers or gym shoes will be much worse compared to those, since they have a thick, but very flexible sole (causing not very precise feeling for the things you stand on) and if chosen at a wearable size are reaching too much over the front of your toes, such that you neither have a defined front edge to stand on nor a good force transmission to the sole, so it will be very strenuous for the toes and muscles in the arch of the foot to stand on small features.

To summarize: if you want to take it serious and can afford the extra money, pack weight and space, go for genuine climbing shoes. For easy climbing or some occasional climbing section on your hike, your hiking shoes should do OK. Normal sports shoes will perform much worse, so taking those will be a waste in money and energy -- the latter both while carrying them and while climbing with them.

That type of boot is pretty standard for hiking and mountaineering and they work fine for climbing up to a point. I have done plenty of 3rd class ascents in boots like that.

For going up talus fields or piles of large boulders they work great, as soon as you need to smear or hold onto very small ledges, they don't work so well.

The short answer is that they work well for broken terrain and up to Class 3 ascents, but as soon as you need a rope on rock, climbing or approach shoes would be better.

A somewhat provocative answer is that... it all depends on how good you are!

The ancestors of modern climbing shoes were born in the 30s, with the PA shoes of Pierre Allain, who observed that sneaker were more efficient than hard hiking boots when performing technical climbing. The original idea was improved upon in the successive years with the introduction of models such as the EB Super Gratton. The first real "modern" climbing shoe is often considered the Boreal Firé, introduced in 1982.

However, already in the 20s and in the 30s people were performing ascents rated VI grade in the Welzenbach scale, which loosely corresponds to 5c in the French scale and 5.9 in the Yosemite scale. Some examples: the Lettembauer-Solleder route on Civetta (1925), the Comici route on the Cima Grande di Lavaredo (1935) and the Cassin-Ratti route on the Cima Ovest (1935).

Since the PA shoes were introduced in the 30s (see above), I am almost sure that many of these hard ascents were performed using old school hiking boots.

I think pictures like these showcase really well what people were able to achieve with just hiking boots: 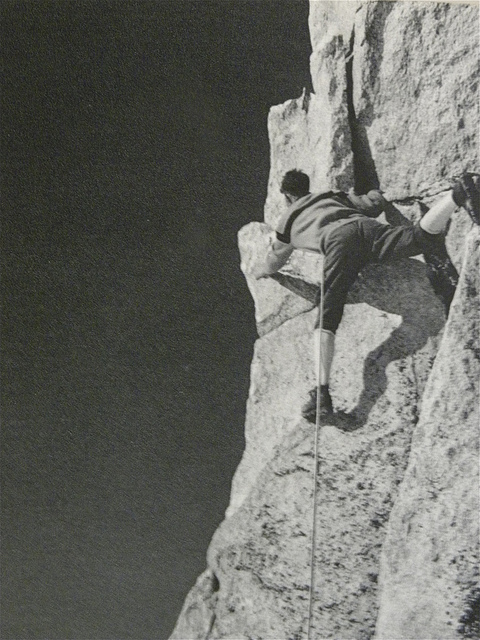 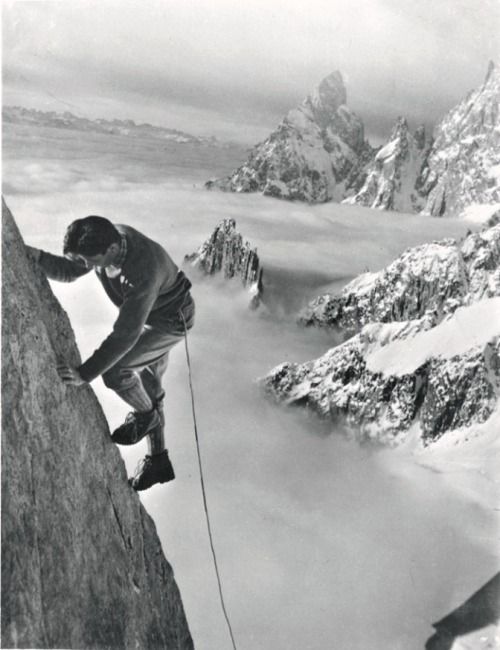 Moreover, many modern hiking boots have a smooth area on the sole close to the tip (sometimes called "climbing zone") in order to improve smearing on rocks.

To sum up, it is certainly possible to do rock climbing with hiking boots. About how hard, it all depends on your skill!

Compared to even the most basic climbing rig, shoes are small and light so not carrying them doesn't really help with your load. Climbing kit is expensive, with or without shoes, but shoes are much more personal than some kit that can be borrowed or shared, so you may be able to save some money. The thick sturdy soles of boots are almost the opposite of climbing shoe soles, which allow your foot to conform to the rock. This will seriously limit what you can climb.

On the other hand, most of my climbing was done in boots - and it was very basic. You can certainly have a go, to see whether climbing is something you want to commit time and money to doing properly, but don't expect to progress very far. For me this worked well, as I found that I enjoyed other activities more before climbing cost me very much.

Mountaineering boots are made for rock climbing - in addition to hiking, walking/climbing with crampons, ... This means there is a compromise between multiple purposes, while dedicated climbing shoes are just for climbing (if you can walk comfortably in your climbing shoes, they are too big or specifically not performance oriented).

TLDR: Climbing shoes are better, but mountaineering boots are perfectly fine for easy climbing. If you get hooked by rock climbing (you will ;) ), you'll want to get dedicated climbing shoes though (your climbs will become less and less easy).

You mention hiking boots but you show what are more like mountaineering boots. The difference between the two types of boot have implications regarding their use for certain types of climbing: Hiking boots will have slightly softer soles (possibly with rounded edges), allowing "smearing" or gripping sloping flat rocks. Mountaineering boots will have stiffer soles with sharper edges, allowing you to catch onto tiny rock edges.

Not the answer you're looking for? Browse other questions tagged hiking rock-climbing climbing mountaineering boots or ask your own question.

18
Painful leather hiking boots - persevere or give up?
5
Effective training for rock climbing
8
Do alpine boots hurt when walking (not climbing)?
4
Affordable Hiking/Trekking boots for flat feet
6
Are cushioned socks necessary for hiking boots?
6
Hiking with boots untied?
7
Shoes for hiking and minor rock climbing in Australia?
0
Timberland classic 6 inch boots for mountain hiking/trekking
7
How stiff of a sole should I look for in hiking boots?