How did O’Brady charge his electronic gear while hiking across Antarctica?

The Outside Online article How to Fuel for a Solo, Unassisted Antarctic Crossing starts with "Colin O’Brady thinks it’s possible—but just barely—to haul enough calories to traverse the continent. Here’s how," It mostly discusses "human fueling" (calories) but later says:

That means starting out with a sled weighing 375 pounds (Worsley’s, in contrast, weighed 330 pounds). Unlike Worsley, he’s not bringing cigars or a bottle of Royal Brackla Scotch whiskey to toast his progress. In fact, he admitted, “I’m not bringing a second pair of underwear.” That ruthlessly pragmatic approach contrasts with the swashbuckling tradition of polar exploration pioneered by the British—but this particular challenge, O’Brady believes, simply doesn’t allow any margin for whimsy. The starting load of food was about 245 pounds, with another 55 pounds of fuel, which is needed to melt the necessary five liters of water daily, and 75 pounds of equipment and clothing.

The Antarctic hikers mentioned below looked at using photovoltaic cells to convert solar power to electricity and store it in batteries (or thermally) for melting water and charging electronic gear.

Question: How did O’Brady charge his electronic gear? Solar? Conversion of thermal power from burning fuel to electricity somehow? 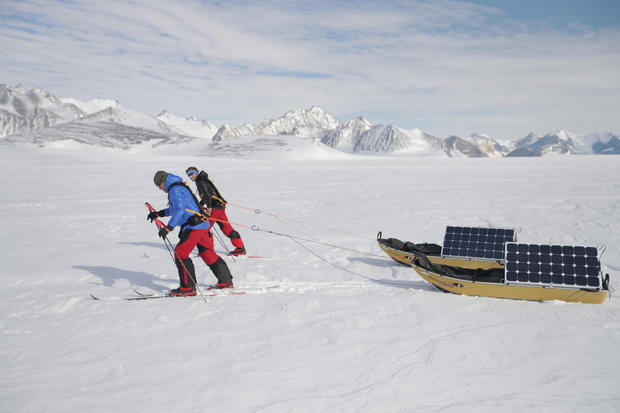 Borrowed from What technology assistance did NASA give to hikers to the South Pole using renewables-only?

He did it with solar panels,

Sunlight, which shines 24 hours a day in the summer, O'Brady says, "is weird and disorienting but I actually kinda like it," since it allows him to charge his solar panels.

To charge electronics, like the satellite phones that are their lone link to the potentially life-saving human world beyond, they place solar panels inside the tent, which capture enough light in the 24-hour sun of Antarctic summer days to charge through nylon walls.

It makes sense as there is plenty of light and it's a passive system that doesn't require attendance the same way that burning fuel would.

Not the answer you're looking for? Browse other questions tagged electronic-gear or ask your own question.