What is a cartridge’s point-blank-range?

Related to the idea of a flatter shooting cartridge, and the reason why a flatter cartridge makes it easier to hit the animal within the vital area, is the concept of point-blank-range.

What is point-blank-range when hunting with firearms and why would it matter?

As the answer to the question about flatter shooting cartridges states: "you don't have to get the range to the animal as accurately because the bullet is dropping less". The concept underlying this is the point-blank range, which is the theoretical maximum range at which you can hold directly on target (ie not adjust for range) and still hit it.

In order to hit a target dead on, you must know both its range and how your bullet travels after it leaves the barrel (its external ballistics. This is certainly possible, but takes a non-negligible amount of knowledge and time. For hunters, though, you don't necessarily need to be driving tacks with every shot. This is because there are many areas on a deer, for example, in which a hit will be lethal: 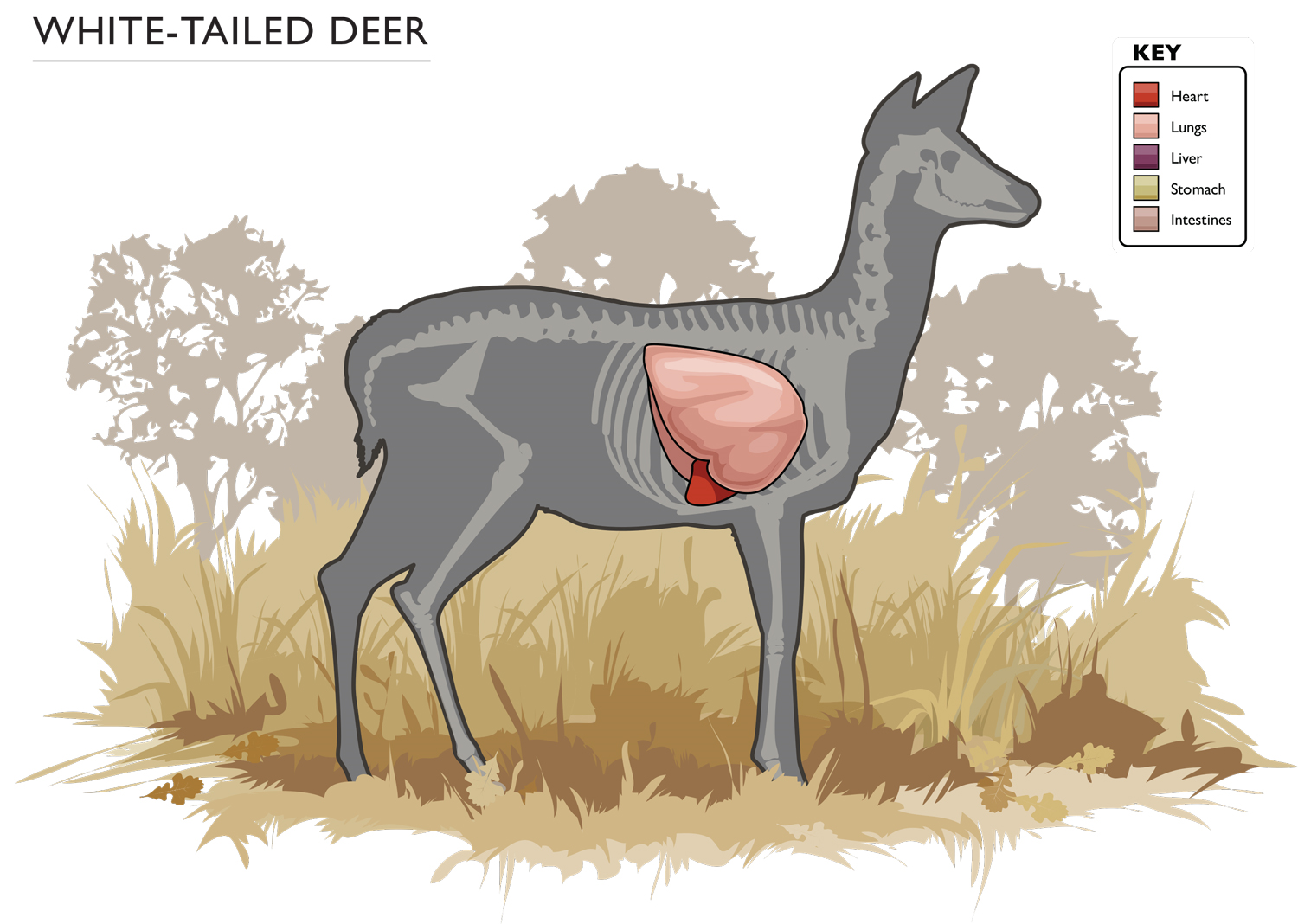 If the vital zone (the heart and lungs) of a deer is an 8" diameter circle, you can aim in the centre of it and, even if your bullet lands 4" above or below your point of aim, you will still have a lethal shot. 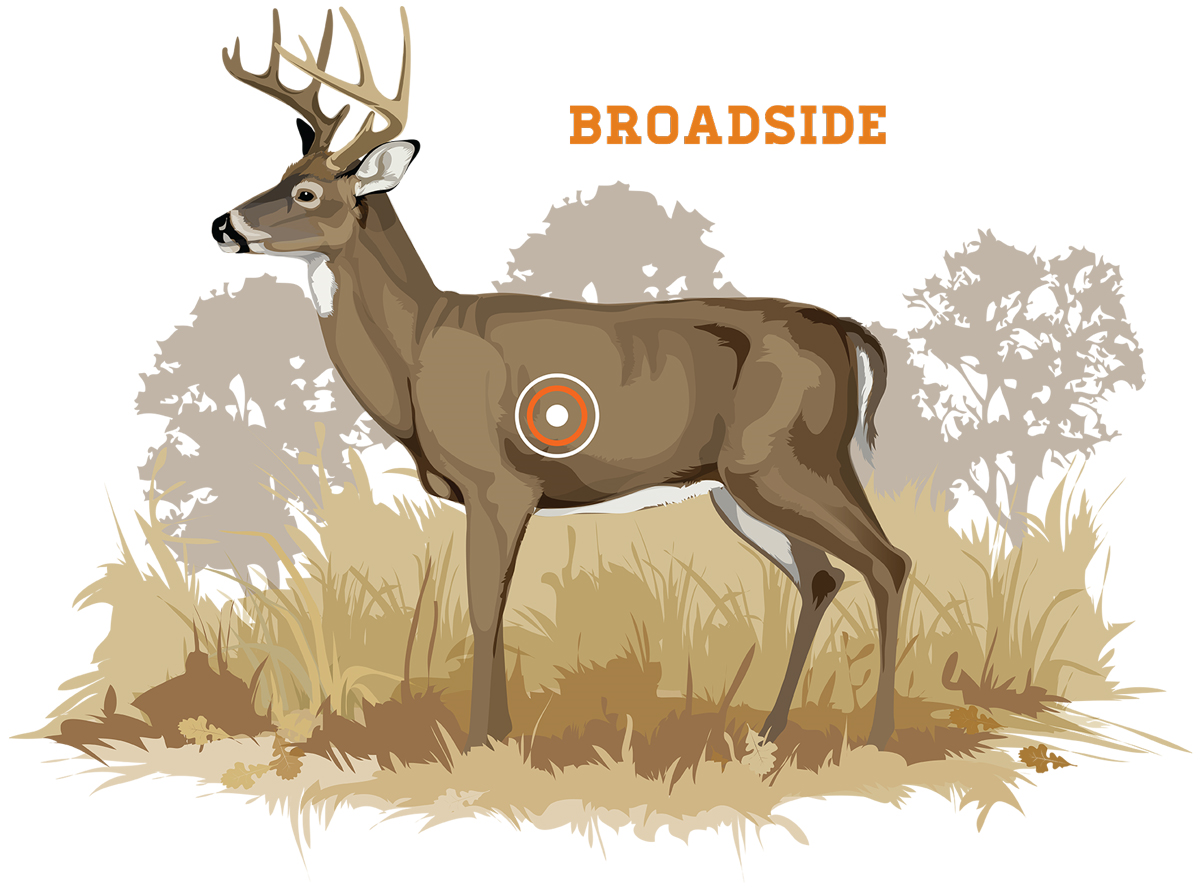 So, in this example, the point blank range will be the range at which the bullet does not travel above or below the line of sight by more than 4 inches. Let's look at two different cartidges: a 250 gr. 45-70 Gov't and a 180 gr. 300 Win Mag (I'm not trying to advertise for Hornady, they just include some ballistic information on their website). ShootersCalculator is a good resource for calculating bullet trajectories and point-blank ranges. Taking a look at the trajectories of the bullets when zeroed at 200 yards, the 300 Win Mag is clearly flatter shooting: 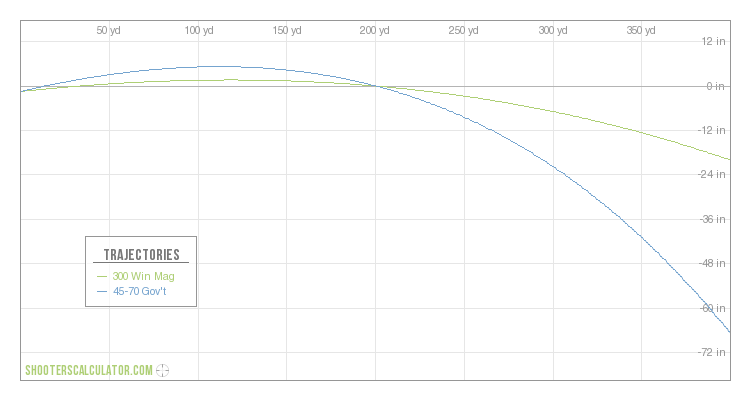 What does this mean for point blank range? The PBR for the 45-70 is 211 yards with a zero at 181 yards whereas for the 300 Win Mag it is 325 yards with a zero at 277 yards. This means that you can theoretically lethally hit an 8" target at a much further range with the 300 Win Mag without having to compensate for range to target or the external ballistics of the bullet.

All of that said, I don't recommend taking shots without some kind of range compensation. If you aim at the centre of a target at point-blank range, the bullet should hit at the bottom of its vital zone, but this would only occur in a perfect world. In reality, many sources of error are introduced, including the intrinsic accuracy of the rifle and ammunition combination, the ability of the shooter, the natural variation in targets, etc. In my opinion, we should all try and have the bullet hit the target where we want it to, and thus knowing the external ballistics of your bullet is more important than knowing the point-blank range.

10
What does it mean for a caliber to be flat shooting?

9
Gunfire in US national parks
13
Why would archery season be either before or after rifle season?
5
Locations to sight in a rifle around Boise, Idaho
2
What is a top strap on a revolver?
4
In orienteering/navigation, what is an attack point?
4
What constitutes mountain exposure when hiking or scrambling?
15
Is there a difference between a hiking trail and a backpacking trail, including if it's the same piece of land?
10
What does it mean for a caliber to be flat shooting?
4
Can you train wild deer to get "used to" your scent before the hunting season
29
How likely are you to be injured by falling shot from a game shoot?