What animal could entirely strip the bark of a birch like this?

I was snowshoeing in Quebec and saw these birch trees completely removed. There were fine what appeared to be teeth marks. The was moss that was left trees. 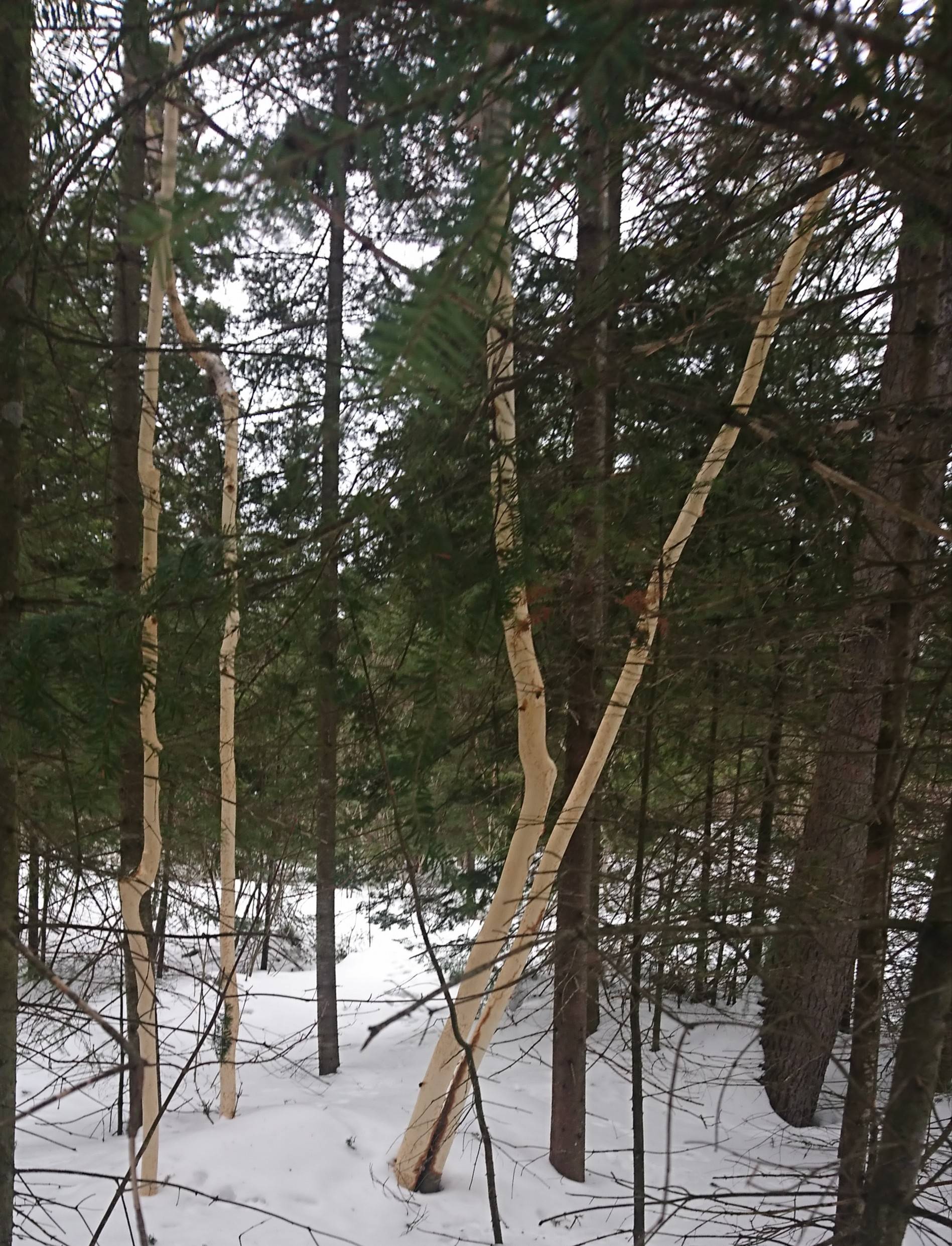 With the little information provided the safest educated guess would be porcupine having a wintertime meal.

An extension.org page on barkstripping discusses the issue and lists likely culprits and telltale signs:

Identifying the cause of the bark damage is fairly easy.

Beavers and rabbits can only strip bark as high as they can stand.

Black bear damage typically occurs in the Spring. Stripped bark will lay on the ground. Vertical tooth and claw marks may be noticed. Damage will mostly occur on at the 3-5 foot level of the tree, typically conifers 15-30 years old. Damage may be extensive, up to 70 trees in one day.

Field mice (including voles and deer mice) tend to strip bark during the harsh winter. Damage often takes place along the vertical portion of the trunk that lies beneath the snow.

Mountain beaver damage occurs low on the bole of smaller trees. Tooth marks will be horizontal. Claw marks will be irregular. Twigs often clipped quite high on the tree, leaving 2-inch stubs.

Porcupines rely on tree bark as an essential component of their diet. When they are around, trees, especially tender branches in the upper-most parts of the treee, will be substantially and quickly impacted.

Squirrels typically strip bark in late winter or during periods with low acorn or seed production by trees (Fig 2). Horizontal branches seem to be preferred, but have been known to strip the bark off of trunks too (Fig.3).

Chunks of the outermost bark will also be found on the ground (Fig 4). Squirrels are also noted for the amount of surface area stripped (Fig 5).

Those descriptions make porcupine seem like the best match for the extent of bark removed in your photo. Also in the northern Adirondacks, which has a somewhat similar climate to Quebec's boreal forests, I have seen similarly surprising extents of barkstripping on trees which an expert field naturalist was confident was due to a porcupine. Sure enough, nearby we found porcupine tracks and eventually a hiding porcupine itself!

To confirm, it would be helpful to have a closer look at any tracks or marks left in the snow near the trees or on the trees themselves. A more precise location in terms of habitat/biome you were in could help too. Some research shows porcupine are present throughout Quebec, but was this finding in an area with porcupine habitat nearby (rocky spots, glacial erratics, etc.)?

Not the answer you're looking for? Browse other questions tagged animals trees canada snowshoeing or ask your own question.

28
What animal could strip all the bark off the lower 7 feet of this tree?

28
What animal could strip all the bark off the lower 7 feet of this tree?
7
What kind of tree produces these seed pods looking like spiky balls?
4
Could this year's unusual warmth harm turtles?
5
What are these fungi that I've found growing on a dead birch?
5
Is this fungus on a birch tree Chaga?
9
What is this tree with shiny leaves and a fuzzy seed pod?
7
What kind of animal may have done this?
5
What is this plastic net with a wide middle and bottom that looks like an upside-down flower hanging from a tree?
1
Fall/autumn colours in northwest North American mountains
5
What are these painted markings on trees for? (not trail markers)