Can you tell if a waterfall is slippery based on how it looks?

Take for example the picture below, taken in the Erawan National Park. The surface of the waterfall is a shade of white, maybe from calcium(?) and it actually very coarse. Even though it's somewhat steep, you could (I'm not advising to) walk right up there.

I've also seen waterfalls that look like stone without anything on them but they were very slippery, possibly because they had some biofilm on them.

Short of touching the rocks, are there any tricks to determine if a waterfall's surface is slippery or not? 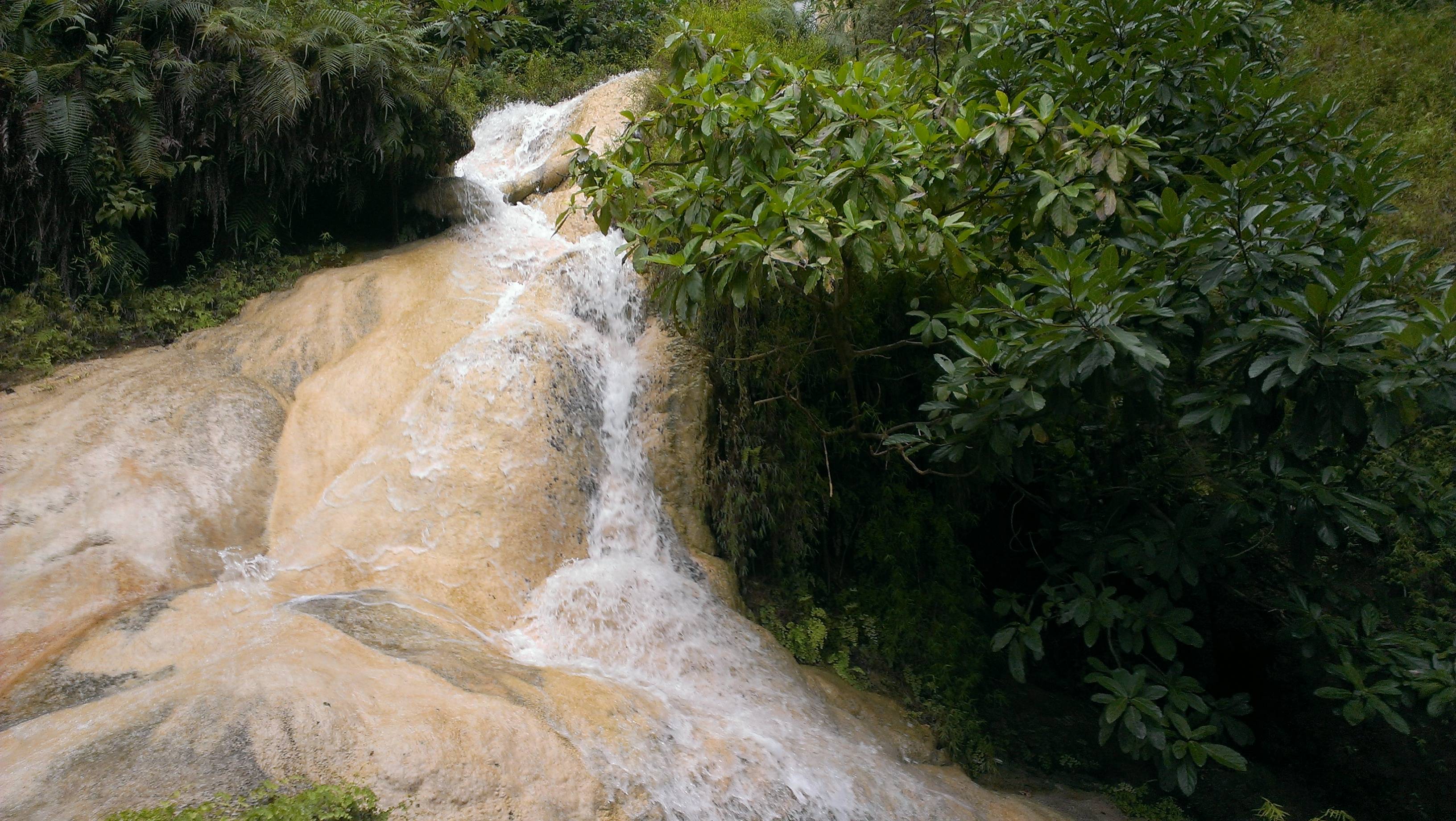 The slipperiness usually depends on a biofilm on the rocks themselves. That, in turn, will vary depending on flow velocity, turbidity, sand carried by the water, and most importantly, how long the rock has been underwater.

I found out the hard way crossing a knee deep stream after a rainfall. The rocks at the edge had good traction. As soon as I reached the main channel, the rocks were as slippery as goose grease on a brass doorknob. I fell, but caught myself in an extended push-up position, and very carefully hand-and-foot crawled to where the rocks were less slimy.

Different footwear can help. After all, aluminium canoes seem to stick very well to wet slimy rocks. I have had better results using a softer rubber sole. Based on canoes, I suspect that aluminium hobnails would work, but these would wear very fast on normal rocky trails. I haven't tested them.

I make a point to give the upper end of waterfalls a wide berth. I have however gotten my canoe stuck in interesting places, and a couple of times one of my party has stepped on a slippery rock, sometimes with a slope no greater than the camber of a paved road, and slowly but unstoppably slid out into the river or lake.

I can only judge how likely it is to be slippery. These are my experiences from doing canyoning:

Green surfaces mean there is algae growing. Some algae is brown, but if you are close enough you can detect them as algae nevertheless. This almost always slippery.

Then I judge the type of rock. Examples: Limestone is more often polished smooth than other types. Granite is very often non-slippery. One can ponder this when walking to the waterfalls, not even seeing them.

Considering the weather a few days ago makes sense, too. Heavy rainfall can wash away slippery films. Really dry weather can dry those out, but can also lead to slippery dust on the rocks. Everything between means, there is somewhere something slippery.

At the waterfall I compare rock that is always dry to rock slightly sprayed by water and to rock directly in the water. Usually dry rock is non-slippery. If everything looks the same it is very likely that it's not slippery. Still I am careful; there are exceptions you can not see. If there are heavy differences like in your picture, it is very likely that there are slippery surfaces. I would suspect the lighter parts are slippery there.

As a rule of thumb the rock wetted by the spray is very often slippery. Where there is much water, slippery stuff is often washed away, but so are probably you.

Last but not least, the slope of the stone you tread on makes it more or less likely for you to slip.

Not the answer you're looking for? Browse other questions tagged safety waterfalls or ask your own question.