Any actions to take with GPS rollover?

For those of you who haven't noticed, your GPS may have become a time traveler this week.

The GPS system was invented in the 1980s and uses an epoch of Jan 1, 1980 as the starting point for calculating dates. Many computers represent dates as a 32-bit count of seconds, which rolls over in 2038, but work is happening to extend the range before that happens.

Various companies dealt with this in various ways, much like we handled the year 2000 debacle.

The usual way to deal with this is to write a kludge into the firmware saying, "add 1024 to the week number received from the satellite".

You can see the problem with this particular trick: It only works after the rollover.

If you are shipping a unit that is going to span the roll over period, you write a hack like this: "if week number less than 950, add 1024 to it" The number 950 would allow you to ship units about 1.5 years before the rollover, and not get caught.

This is what DeLorme did, I think with an 8 month lead.

I don't know what DeLorme models were affected. My PN-60w is one of the affected ones. It started time traveling last summer.

Addendum: After two hours under an open sky it has not been able to get a fix

Addendum 2: It was going to sleep before getting a fix. Told it to not go to sleep while immobile, and it locked in a few minutes.

I don't know how this affects SPOT devices.

In the intervening years, DeLorme was bought by Garmin.

On another forum, I found someone who contacted Garmin, and basically was told, "Sucks to be you, we're not giving support on a discontinued brand" They phased it more politely than that.

To be sure: This does NOT affect the accuracy of the GPS location. But recorded tracks will be transfered to your computer 19.6 years older than reality.

Original answer below. Apparently I'm not the only one incensed by Garmin's behaviour. Garmin has a firmware update for the PN-60 series version 3.7 that was NOT present on their website last time I looked for it. Could be I used the wrong search terms. Anyway the 3.7 update works.

If this took a week longer, I would say, "squeaky wheels get greased" As it is, I suspect that this was in the works, and it's release today is coincidence.

The link to firmware version 3.7 still does not come up in Google. For others who have a Delorme PN-60 series. The instructions and link to Firmware 3.7 can be found at the link below.

Original Answer: At this point there isn't a great answer.

Below is a simple spreadsheet used to convert GPS dates from before the rollover to current dates. If you need dates on the trip, print this up small, and tape a copy to the inside of your map case. 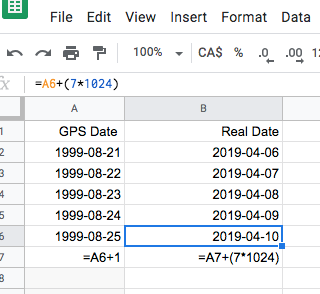 Most of us don't actually need dates on the trip. (I did a trip last summer and didn't notice that my GPS was doing this. But it may affect archival records of tracks and so on. The same trick can be used there:

You will need to contact your vendor. Put in a feature request to add a 'rollover' parameter to imported data. This should be a per GPS value so that you can set it so that data imported from your Delorme adds 7*1024 to dates, while your Brand New Sparkly Garmin doesn't.

If you are a techno wizard, download the firmware from Garmin's site (they still allow Delorme downloads) and reverse engineer it. Since Delorme's worked after the first rollover, they already are adding 1024 to the week counter. Just need to find that and change it to 2048. (Just ... Right. While the change is trivial, finding where to put is not.

Example 4.8. Time-shifting a track with the track filter

The following command line will shift all tracks to be one hour later.

Not the answer you're looking for? Browse other questions tagged gps or ask your own question.

5
Reattaching waterproof rubber on GPS
9
What specific features should I take into account when buying GPS device for Geocaching?
8
Device with very accurate GPS location
8
GPS Altitude Anomalies
5
E-ink device with GPS for maps?
3
Are there any affordable, dedicated (one-purpose) handheld GPS receivers with nice satellite maps?
17
Are there any GPS devices with no transmission capability?