Why aren’t birds using these feeders?

I've been hanging these fat balls for a good while and they're intact. Previously I was hanging a feeder filled with seeds (for birds) in front of the window and that was also intact for a while; so I replaced it with these fat balls.

In my previous places of residence that I hung these (not exactly the same spot, but same country, similar areas), they’d barely survive a week. The ravens would destroy them if no other bird.

Here, I hear and see the birds of many species around, chirping on the tree or wandering about (and snacking) on the ground or flying but they don’t seem to eat anything from these feeders. I’ve also thrown a few pieces of bread on the ground/bushes, and the same thing happens. It remains intact for days till I remove them. What could be wrong?

Across the fence in the background it's a sports field with natural grass. During spring I'd see herds of wild fowl grazing there, possibly before starting their migration journey. At nights I see foxes marching around and I’ve also spotted a squirrel once if that matters.

The Irish sea is only a few kilometers away, and that's where the wild fowl would visit from. The area outside the flat is regularly maintained by whomever is in charge, but as far as I am aware there aren't any bird repellants used. There shouldn't be any chemicals either, and even if there is, that should be washed by the frequent rain fall that happens here. The balls are generic bird fat balls but not super new; the mixed seeds were just purchased and were/are very fresh. The feeder is a standard one, made of metal caging and a plastic lid. The metal is obviously painted for rust protection but there's nothing unusual about it, no paint smell or anything like that. Plus the fact that I have used the very same item in other places to feed birds and they've been happily eating from it. 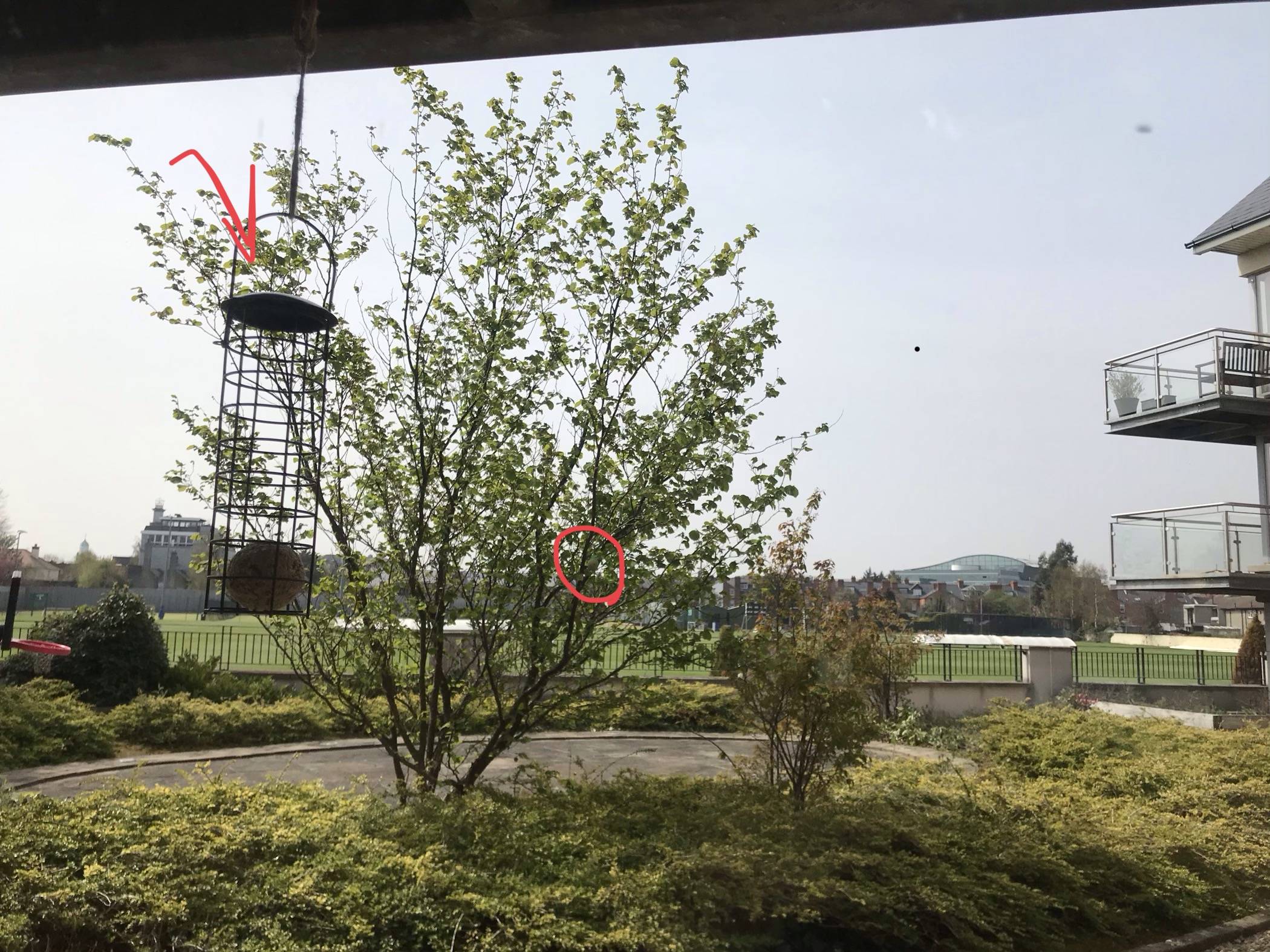 P. S. The photo is taken from inside. One ball is hanging on the tree and the other is hanging outside the window, off the above neighbor’s balcony construction. This window is west-facing with little sun or heat other than the afternoons or sunsets, clouds-permitting!

After a brief exchange of comments, I think I have enough to take a stab at an answer, with the caveat that this will be mostly informed-guessing on my part. After all, every animal has its persnickety side, and who knows what's going on inside the their heads. I mostly think that some variant of "new-ness" is behind your observations.

I had a birding lecture last night and the lecturer said that bird feeders should be surrounded by places to perch. He stated that this more naturally mimics a birds habitat because they usually fly in, perch, feed, perch, feed, etc, before leaving.

I am also curious how much sun the feeder is getting as from the picture it appears to be full sun. What happens if you move the feeder to the shade of the tree/bush that you have circled? If that works, maybe you can mimic that environment where you have the feeder now?

15
Does a bird really abandon the nest? Will similar birds re-use it?
8
How should I position my hummingbird feeders to attract the most birds?
21
Do bees at the hummingbird feeders keep the birds away?
5
Do American mourning doves only make their plaintive cooing sound where people can't see them?
8
Why are common grackles standing on our bird feeders with their heads pointed straight up?
10
Do birds get ticks?
22
Why do some birds fly in a V-formation?
3
What is the meaning and proper usage of the term "irruption" in bird behavior?
7
What can I do to get garden birds back after hawk has made my bird-feeder his hunting ground?
9
Can dirty bird feeders make birds sick?