Definitely not a duplicated question to this one... Rather a much more specific question...

The situation arises when there are bolted anchors at foot level on the edge of the cliff: 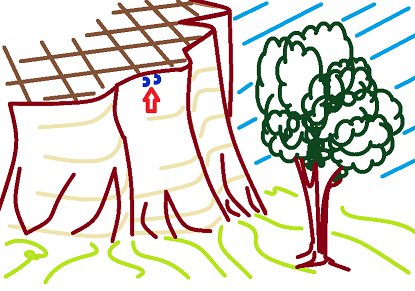 The issue is that if you have set up the anchor off a cordelette (or a sling) as in... 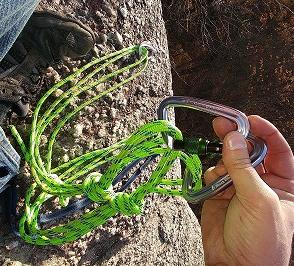 and you clip a dynamic rope to this anchor, and then set up the rappelling device (extended ATC with Prusik knot) 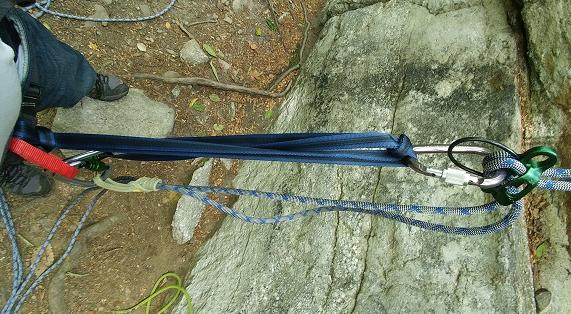 you may very well find yourself hanging from some 4 to 5 feet of slack.

If you can't set up a static rope in the back of the ledge (say, off a tree or boulder) to lower yourself smoothly until the rappel device comes under tension, I only see two solutions to avoid downclimbing on a slack rappel setup with a possible nasty slip: 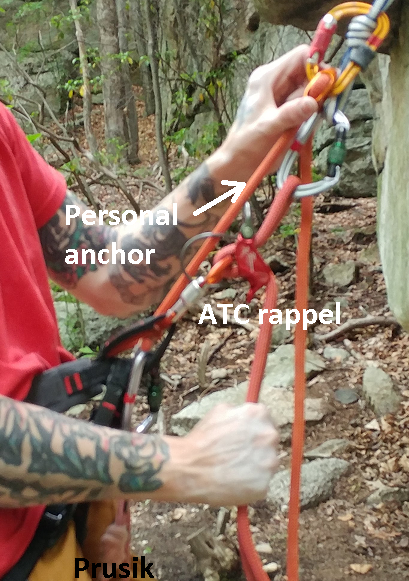 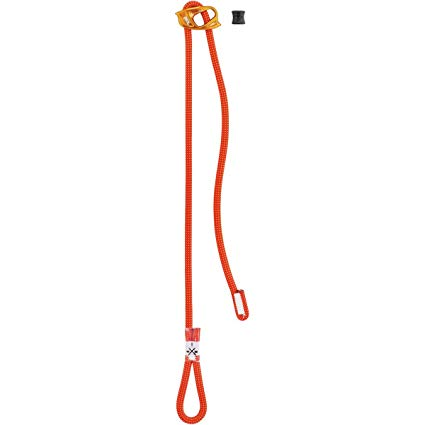 Here is a way of lowering oneself to make the rappel device taut below the bolted anchors using the Petzl PAS (biner to one of the anchoring biners). In this case, the system is tied to the bolts via a figure 8 bunny-ears knot, leaving two strands of a static rope to rappel down, or lowering oneself using one strand and a GriGri. 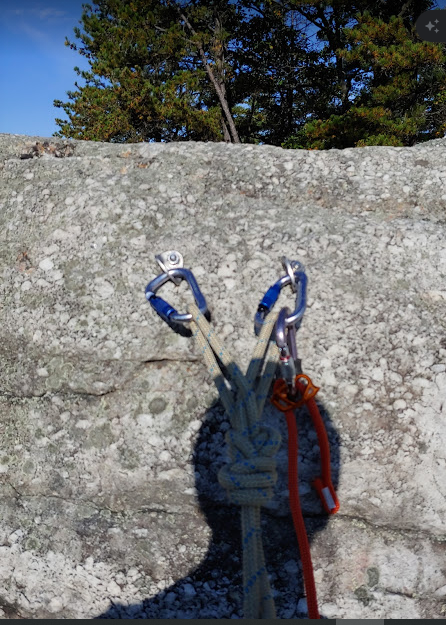 As you are looking to rappel for fun, you should find a place better suited for it. As you mentioned, the anchors are not well situated for an easy rappel. If you want to rappel off that cliff, just set the anchor off the trees and and use a static line running over the edge so you can use do a straight simple setup.

If somehow I was forced into this situation and for some reason I did not want to use the trees, I would just use a regular non-extended setup. I would tie the rappel rope off and attempt to down climb. If I fall, no big deal, the rope will catch me.

Break it down into a passing-a-knot problem: Set up and lock off your (extended) rappel system in a safe place, and then use The Rope to do the rappelling job you were going to do with the awkward-to-release PAS.

For example, pre-set and lock off the ATC to a comfortable distance below the foot-anchors, then put the end of The Rope through the higher anchor/strong point/bolt carabiner to make a doubled rope, and rappel down over the edge and onto your locked-off ATC using a munter on the doubled end. When you've transferred yourself to the locked-off ATC, release and disassemble the munter, pull the rope end out of the upper anchor and check your descent, and then un-lock-off the ATC and go as normal.

You don't want to try to control essentially two simultaneous rappels with separate hands as you show in your last pic, you want to transfer safely from one (short) rappel to a second rappel, which is a good-to-know pass-the-knot skill (but it's made a bit easier, since you can pre-setup before you start off.) With a munter on a doubled rope, you can snug up and limit a fall to inches and rappel farther than any PAS can reach.

There are two issues here:

(2) You're rappelling off of an anchor set up using a long cordelette. The only reason we normally put a long extension on this type of anchor is if the anchor is above the lip, and we want to toprope on it. The setup you would use for toproping is then not the same as the one you should use for rappelling. The toproping setup includes a lot of gear that you don't want to leave behind, and has to be extended over the edge so the rope can travel freely. The rappelling setup, in a real situation where you need to rappel, doesn't include any gear that would be left behind, and is much shorter.

The anchor in your photo doesn't have any chains or rap rings, so it's not intended for this purpose. Don't use it for rappel practice. If you had an anchor positioned like this, below the edge of a cliff, and it did have chains and rap rings, normally you'd lead the route, and when you got to the top, you'd hang yourself off of the chains, then convert to a rappel setup. You would not get up above the anchor and then set up for the rappel.

It's very common that starting a rappel from above the lip of a cliff is awkward. Normally there is not four feet of slack, so the issue is just how to stay stable while getting your weight onto the rope. I usually sit on the edge and then scoot my butt off. Putting your left hand on the rope above the belay device can help to keep you more stable while you do this awkward maneuver.

14
Whats the best way to abseil off a ledge with the anchor at foot level?

19
Backup prusik for Abseiling: Where does it go?
14
Whats the best way to abseil off a ledge with the anchor at foot level?
10
What is the strength of an ATC belay device when used in a guide mode/multi-pitch setup?
9
Abseiling on one rope: should I attach the prusik to the other one?
6
The dangers of simul-rappelling
6
Grigri+ vs grigri 2
3
is it safe to use a 4mm cord for French Prusik auto-block friction hitch when rappelling off parallel 10mm dynamic rope?
3
Rappel: How do I start rappel from a ledge when using rappel extension
5
Multi-pitch sport climb: Rope too short for rappelling, but having a backup rope
6
Is it safe to depend only on a prusik?