Why might a larger peregrine falcon chick take longer to molt than smaller siblings?

But over the last couple days, I've observed something that I'm not sure how to explain. For those who come along later, things may change on the web-cam, so here is a still I captured this morning (Wednesday 5 Jun, 2019): 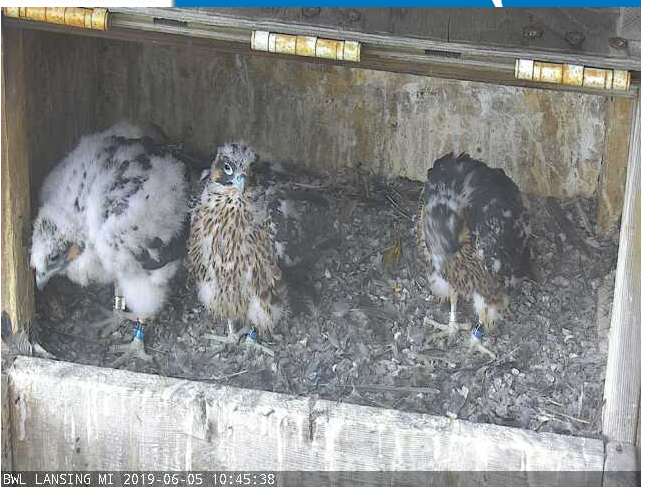 The Michigan DNR has been by to give these chicks a health check and place the bands, and the local Energy company, upon whose building the falcon chose to nest, place the cams. But notice how the one on the far left of the picture is still in down, while the two siblings are much further along in the molt and almost have full adolescent plumage. At the same time, this downy chick appears to be quite a bit larger than the siblings. This might be just a trick of the eye caused by the down, but as I continue to watch the web-cam I am convinced this one really is 5 to 10% bigger. I assume in another month or two the chicks will again be indistinguishable, but for now the one clearly stands out.

I read this little resource, but the language was rather technical and a bit over my head, plus it really didn't explain sibling variation. Any ideas?

Between the comments, continued observation of the Falcon-Cams, a little wiki-reading, and information on the site of the sponsor of the cams, I think I can confidently give myself the answer.

First, the chicks have different appearances, and particularly different development of adolescent plumage versus hatchling down, simply because they are different ages. Falcons may lay a clutch of several eggs per breeding season, but they are not all laid at the same time and do not hatch at the same time. The chick with the most down is probably a full week younger than the others. Looking at the same web-cams one week later, it is far less downy now, and maybe even less downy than the siblings were one week ago. Further, the Lansing (Michigan) Board of Water and Light (LBWL), host of the falcon's nestbox and sponsor of the web-cams, shows on its site the dates of laying and hatching of all prior clutches, confirming the normal week-long spans of laying and hatching. (EDIT: The Falcon Fact Sheets seem to have been removed from LBWL's community sites. I will keep looking and correct the link if able.)

Next, the younger chick is probably female, while the older two are probably male. LBWL along with Michigan Department of Natural Resources (DNR) did a check and banding of the chicks, as mentioned before, but has not yet announced the results. However, wikipedia's page on Falco peregrinus informs us that "the peregrine falcon displays marked sexual dimorphism in size, with the female measuring up to 30% larger than the male." From there the rest is conjecture, but is a safe conclusion nevertheless.

On a personal note, as of this moment the two older chicks appear on the brink of jumping out any minute and taking flight. You go, Falcons!

3
How do they tell the sex of Peregrine Falcon chicks?

8
Are crows more interested in identifying individual humans than vice versa, and if so, why?
6
How to correctly identify a bird that looks like a Cooper's Hawk or a Peregrine Falcon?
10
Can a tag on the prey's leg harm a peregrine falcon if eaten?
3
How do they tell the sex of Peregrine Falcon chicks?
2
Behavior of crow pair, larger crow eats the food, not leaving any for smaller buddy