“The larger the foot-holds, the more beginners tend to put as much of their shoes onto them. Instead, also when the foot-hold offers more space, we must still use only the forefoot and avoid using the foot arch and heel.”

I don’t understand why one must avoid using the foot arch and heel, when it is available as an option.

It's a matter of practice, but also a matter of feel: When stepping with the front of your foot you have a smaller contact area, so the pressure is higher than using the whole foot. This increases sensitivity to the rock underneath (extremely important with smaller holds), strengthens the muscles you will need for them, and also sort of gives you more friction is some situations.

That being said, this is mostly bullshit. If you find a foot hold good enough to step with your whole foot, do it. It's not a problem. Also, you will use heels quite often when climbing overhangs, so it's just a matter of avoiding using heels when they are not required - since they are slippery and offer you no feel of the rock. "Rules" like this one are built do deal with the very common situation, mostly at gyms, of people that are beginning to climb and as soon as they find a large foothold, place their feet (sometimes even horizontally) as if this were safer or offered you more control. It doesn't. The point is that, after you know how to climb and to judge what is the best possible strategy, just do it. There's no "right" way. I have seen stuff like resting using the head to balance, using knees to mantle, placing gear in grass, etc. It's ugly, but if it works, who cares? You're the judge.

If you're beginner, it's best to practice stepping with the front of the foot, though... ;)

Edit: Since my answer is the most visible one, I will reproduce here two comments by @josh and @dwizum to @imsodin's (very good) answer: the foot is a lever, and standing on your tiptoes gives you maximum reach. This is precisely the reason why my answer makes sense, being the mechanism responsible for maximizing applied pressure: By locking your joints to achieve maximum reach, the tiptoes naturally become the most sensitive and precise part of the foot. Since josh and dwizum didn't post answers, I believe their comments should be up-voted by anyone who reads this answer.

Apart from the reasons already stated, namely getting used to doing it that way as it will help you on smaller footholds, there's also maneuverability: If you step with the entire foot, it is really hard to turn your foot if you e.g. need to reposition yourself to reach the next hold. You often see beginners especially in gyms doing the "frog move", where they climb standing fully on the foothold, foot being parallel to the wall with their toes pointing outwards. That seriously restricts your options once you need to do any other, harder movements. Just standing with your forefoot makes it more natural to stand with foots roughly perpendicularly to the wall and you can easily turn it if required. Obviously again if your outside and the foothold is a huge platform that doesn't matter, you wont stand that close to the wall such that you can't rotate the foot.

Using your whole foot while rock climbing is a poor practice in most cases as it restricts your footwork and limits your movement options. When stepping with the front of the shoe you are able to effectively pivot and stretch onto your tip-toes.

Pivoting can be a very important part of increasing your overall climbing efficiency by allowing you to move your hips closer to the wall, moving your weight more inline with the direction you want to go and adding precious inches to your reach you would not have standing square to the wall. Pivoting is also important when using more advanced footwork techniques such as backstepping.

I wouldn't consider stepping with the front of the foot as something you must always do, if a large enough hold exists step however you like, but on smaller holds it's best to keep your movement options open by placing the front of your foot on the hold.

As others have said, it's bad practice to use the arch and heel because (a) it restricts motion when you're going for the next hold, because there's one fewer joint you can bend, and (b) it throws your weight back. But it's also bad practice to use your knees, your elbows, your butt, or to jam your head into a crack. But I've done all of these when the route demands it (please don't do the last one!). Off-widths are renowned for requiring parts of the body that are frowned upon in the gym. The point here is that, in the gym, beginners tend to over-use their arches and heels, so it's a good rule to start with. It's one of those rules that you can break later, when you know enough to know when to break it.

It's not bad; it's just better to practice standing on your toe tips, so you can progress to smaller holds that require them later.

It is a bad idea to put your whole foot into a deep foothold as this shifts your leg too far forward and causes balance issues.

On a wide foothold, it's often a good idea to give the muscles on the ball of the foot a rest by turning the foot sideways so the inside edge of the heel takes some load.

Balance is the key issue. Don't compromise it. Other than that, the best choice is the most sure hold.

I've blown out my boot tread on a leader fall and had to relearn how to climb without certain parts of the boot holding. Technique is what it is, and there are other techniques than the ones the books teach. Sometimes the book really is right, sometimes, not so much. Sometimes you gotta invent something wild.

If the climb actually is vertical, the book advice will almost always hold. Even at 80 degrees, however, it won't be so cut and dried here.

If you use just the forepart of your foot and your knees are close to the wall, your calves are already naturally at an angle where your feet exert pull. That makes it easier to bring your body closer to the wall without exhausting your calves. This in turn allows you to load sloping fingerholds in vertical or overhanging terrain in a much more favorable direction.

Another thing to consider is when there is a long, narrow foothold along the wall, e.g. a horizontal crack. Standing on it with your feet parallel to the wall places your center of gravity outside of the foothold (first picture) and you constantly need to pull yourself towards the wall. If you place only your toes on the foothold, your center of gravity is above the foothold, greatly reducing the force you need to hold with your arms (second picture). 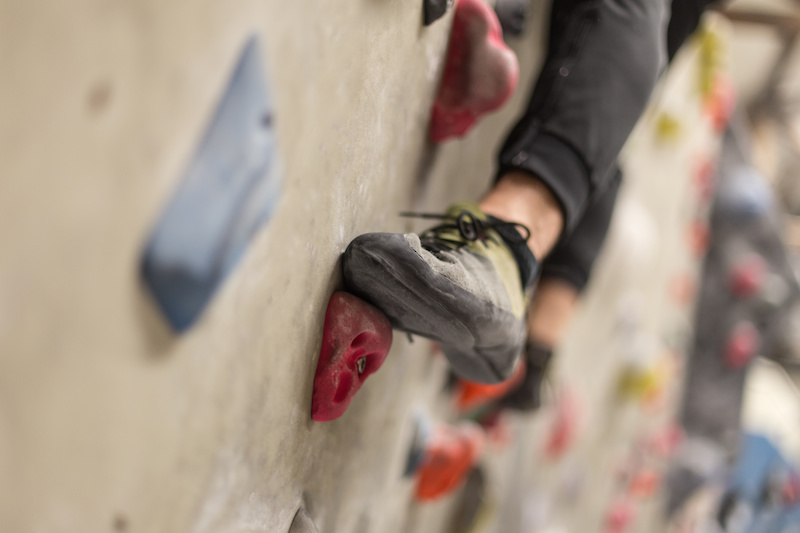 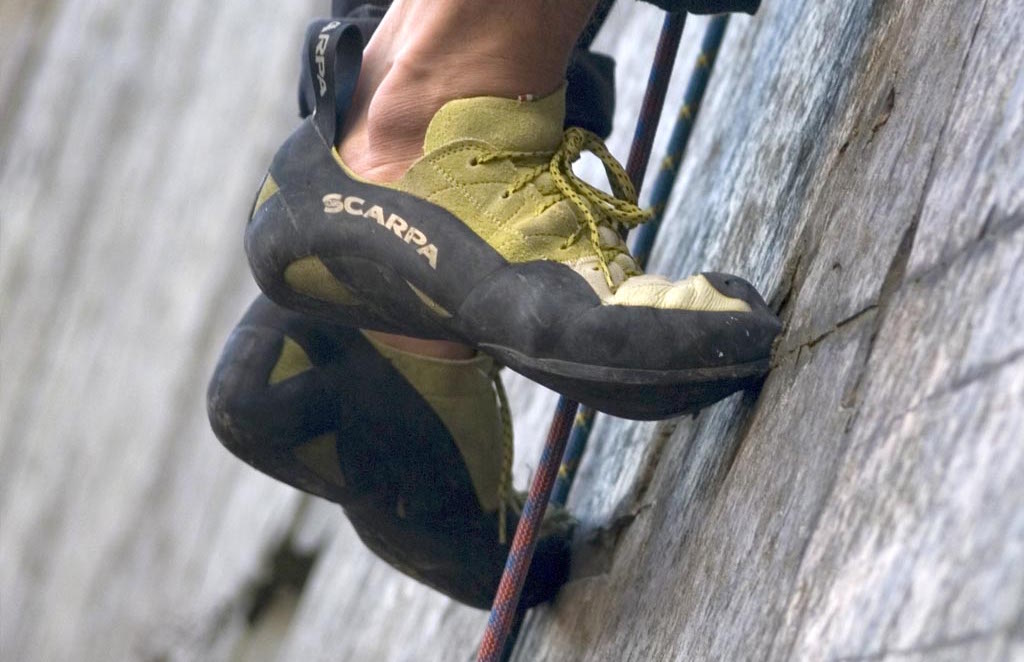 I think this advice is really targeting beginners that use the arch to stand on a big hold. The arch is the worst part of the shoe to use, because it has very poor usable surface area, it's angled, and it often has less high-friction rubber than the forefoot and heel. When I say "standing on the arch", I mean that literally the toes and heel have no contact. I hope it doesn't take further elaboration to explain that this is a really bad habit to start.

Obviously, heels are very useful in particular situations, but one situation where they are not "useful" is when resting on a ginormous hold that can easily accommodate any part of your foot. Again, the heel will generally not offer as much total friction, so even if you could safely stand on that big hold with your heel, it's still better to use your forefoot, because it will grip the hold better (and if it doesn't, get better shoes!). Of course, the cost is that you will be loading the calves, which is why beginners develop these bad habits to begin with.

If the hold is big enough to fit your heel and toes safely, then just use the whole thing! There's no point in gratuitously wasting energy to follow some textbook advice.

Not the answer you're looking for? Browse other questions tagged rock-climbing bouldering or ask your own question.

2
How to progress to harder graded problems?

24
How to inspect climbing bolts?
25
How can I improve my footwork while rock-climbing?
9
How to find climbing shoes for toe and heel hooks?
6
What are common rock-climbing footwork mistakes and how I can spot them?
11
How to safely train for and grip pockets?
12
Do mountaineers use dynamic climbing when traversing rock/ice?
12
How to progress in rock climbing after grades v4 / 5.11+?
10
Origin of the "bell curve" for rock climbing route setting
7
Historical data about rock climbing / bouldering ascents
1
Where can I find videos of rock climbing competitions?