Is there an easy way to remember if you add magnetic declination to magnetic bearings or true bearings?

Is there an easy way to remember the correct way to make this conversion?

The simple answer is to first draw the declination diagram (or at least picture it in your minds eye).

Following is an edit of my answer over at GIS.SE: https://gis.stackexchange.com/questions/61743/applying-proper-conversion-from-true-to-grid-bearing

Note that meridian convergence on topographic maps is typically very small and can be ignored in compass navigation.

The moral of the story is: draw or examine the declination diagram (for the situation at hand) and things will be clear. But remember, the relative directions of True, Grid and Magnetic Norths will depend entirely on where on Earth you are and where on the map projection you are.

According to IOGP Geomatics guidance note on Grid convergence

One convention has grid convergence

(that's the one I'm using above) and another has it

There's a mnemonic: Can Dead Men Vote Twice At Elections?

This is for the process known as correcting, going from least "true" to most "true." For the other direction, un-correcting, well, there is a slightly less safe-for-work mnemonic for that too: True Virgins Make Dull Companions, Add Whiskey.

Ideally, compass deviations will be at or near 0°, and for a hand-held compass in the field, can often be ignored. But these mnemonics were invented by mariners, and are useful for navigators of aircraft and sailing vessels, where there is other equipment that generates its own magnetic field and influences the mounted compass in the craft. Any good navigator takes the time to "swing the compass" now and then, and maintains a detailed deviation table for the vessel.

Finally, here's an article (focused on sailing) that talks about the listed mnemonics and gives examples: (link)

It's the difference between true and magnetic north.

A good map will have both marked, it will also have "grid north" marked, which may not match either. In the UK grid north is simply the line parallel to the central meridian (2° W), so the further away from there you go, the further it is from true north.

The thing to go with that is that "add" isn't really a useful word either, as you can see from the image below which is a global map of magnetic declination, sometimes you add and sometimes you subtract, or possibly add a negative number. It just depends where you are. 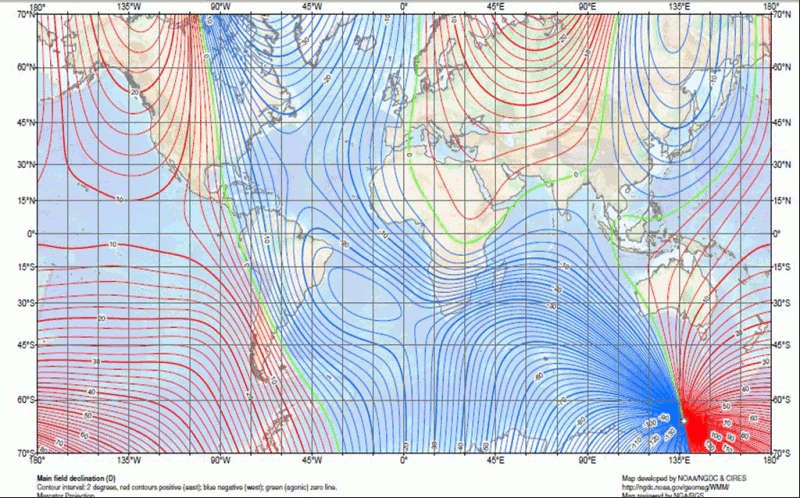 This means that the declination needs to be added to/subtracted from the magnetic bearing i.e. what your compass is showing.

As a sanity check,

That's the simplest way to put it.

If you find it hard to remember between adding and subtracting, you might have more success with a visual approach. This works for me: I have a spatial memory, so it takes effort to remember lists of instructions; perhaps that's the case for you.

Suppose you've just taken a bearing on the map. The north arrow has been aligned with grid north, but you want to use the bearing with the magnetic needle, to follow a course. Visualise yourself looking at grid north and turning a few degrees left to magnetic north. Now turn the compass capsule (with its north arrow) those same few degrees to the left, relative to the baseplate. This has added to the number, but the important thing is that we didn't have to think about adding, just the direction to turn.

Similarly, to take a ground bearing back to the map, we visualise turning from the magnetic north to the grid north, and apply that same turn to the compass's north arrow (keeping the baseplate stationary).

If your compass isn't of a protractor design and has no separate baseplate, seriously consider upgrading to one that is; it will make navigation much easier. Some even have separate grid lines and north arrow to allow pre-setting of the magnetic offset and eliminate the adjustment step.

Doesn't help those with easterly declinations, of course (including here, in a few years' time...)

Canadian topo maps have a diagram with grid north, true north and mag north marked on it. Due to the drifting north pole, I will look up what it is this week online, and pencil it in. Grid north doesn't change.

Usually however I use the grid lines for plotting. So I repeat this whole thing using grid north instead of true north. This often means I have to calculate a GN to MN correction. That also gets penciled in on the diagram on the margin of my map. On Canadian topo maps in sub-artic regions the max GN correction is about 2 degrees. This is about the error in reading a hand held compass reliably.

Not the answer you're looking for? Browse other questions tagged maps compasses or ask your own question.

52
I never adjust for true north. Is this bad practice?
27
How much distance is there between True North and Magnetic North Poles?
12
Are there types of compass other than the regular magnetic one and the gyrocompass?
6
How to take a bearing when the geographic coordinate grid is not aligned with true north on a map?
5
Handheld Compass Triangulation Typical Error Range
39
"Official" providers of topographic maps per country
4
How to explain unexpected success following a bearing taken from an iPad
6
Topo map server out there somewhere?
3
Do Garmin satellite map devices allow me to feed them coordinates from a CSV or JSON file or similar?
4
Is this a valid method from taking a bearing from a map?