Has anyone experience with attaching a hammock to roof rails of a regular car?

I just bought a hammock for my next camping trip. I will be traveling mostly by car and sleep in a tent but wanted something to relax in outside of the tent or car and also might try sleeping in the hammock. My question is: Is it possible (i.e. safe for both, me and the car) to attach one side of the hammock to the roof rails of the car? This might make a lot of places hammock-feasible, as I‘d only need one additional tree.

I am pretty sure that I have already seen auch a set-up with a Jeep-like car somewhere. But the car in question is an Opel Astra with normal roof rails so I fear that the rails might not withstand the sideward pull a hammock would cause on them. Since it is a borrowed car from a family member, I really do not want to damage it.

The load limit for directly mounted roof bars is around 60kg - 70kg for ordinary (European) cars. Usually the load limit for rail mounted bars is lower, but that's for vertical and dynamic load. This is a static load so you're probably ok.

Basically if it was my own car and not in great condition I'd do it, attaching the hammock to the far rail and hanging over the near one. With a borrowed car I wouldn't.

On the other hand if you get a single support for your hammock such as crossed poles, and using a tree at the other end, you can certainly use the tow loop as an anchor as that's more than strong enough to take the load. 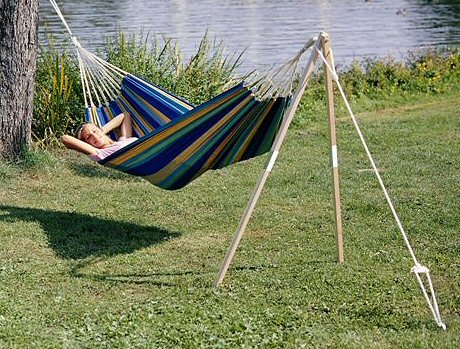 I would attach rope to both rails and perhaps even the door pillar on the opposite side. This would help spread the load if you’re worried about weakening the rail.

Update: In fact why not just tie across the roof to the opposite door pillar and simplify the task. One knot.

I have done this on my 3 series wagon. I had the strap tied around the middle vertical support of one of the side rails. I also have cross bars installed, so I don't know if that helps in anyway to reenforce or distribute some of the load to the other rail, but I didn't have any issues. I just made sure that the strap was situated in a way where it came over the top of the bar so that it wouldn't rub on the paint of the roof.

Not the answer you're looking for? Browse other questions tagged camping hammock or ask your own question.