Tents with (the outer tent) made of cotton or "technical cotton" (cotton blends) are heavier, more expensive, and take some more time to dry but they also have benefits (see below). Sure the weight is an argument against for backpacking but in other travel scenarios the benefits are more relevant.

Nevertheless my impression is a decline in selection of cotton tents. What's the reason for cotton tents not being more popular? Several people I spoke with mentioned a fear that cotton tends to leak but experiences of people that actually use cotton tents tell the contrary, so may it just be bad marketing?

I grew up car-camping in a frame tent (slept 4 in about 1/4 of the floor area). Those things are heavy. Seriously heavy. Lifting the fabric onto the central pole with that half-extended was hard work for someone strong. The poles had to be pretty robust too, as the pitching process involved one or two poles taking most of the weight at various times. The whole thing took well over an hour to put up.

Some of the downsides of such designs could be solved with more modern constructions, but trying to lift that canvas by pushing on dome tent poles would get nowhere and/or snap the poles.

The bulk and weight made storage difficult. The fabric and pole set each weighed more than an entire similar sized nylon flexible-pole tent. At least here in the UK tents are often stored in lofts (attics) and getting a frame tent up a ladder was hard work if it even fitted through the hatch.

Even packing a car was harder due to the bulk. And they're too heavy for roof boxes.

If you did ever get home with a wet tent, that's a lot of fabric to get dry - and you have to get it dry thoroughly and quickly to avoid mould.

For scouts use, the needs are different. You need robust and large, but they're normally stored somewhere easily accessible, and you have a team of people to erect them (the ones I used were put up rather like raising a barn, in that several people pulled one end up, rather than ever having to lift the fabric high.

A good cotton tent is expensive, but can be very good value as they last a lifetime and are childproof. In The Netherlands, families may camp up to 5–8 weeks per year, car camping on campgrounds in western or southern Europe. They quite often have cotton tents, I'd say they are the majority of quality family tents on those campgrounds, such as in the pictures below.

During my childhood, we always went camping in summer, for up to six weeks in a row, using a bungalow tent, with the kids sleeping in a cotton tent somewhat similar to the pictures below (only a somewhat cheaper model). Only in adulthood when I started backpacking, did I first learn about the problem of condensation — there is no such thing in a cotton tent. Synthetic tents are really only needed if you carry a tent on the back or the bike.

Consider a stereotypical image of a French campground in summer:

Or at the coast: 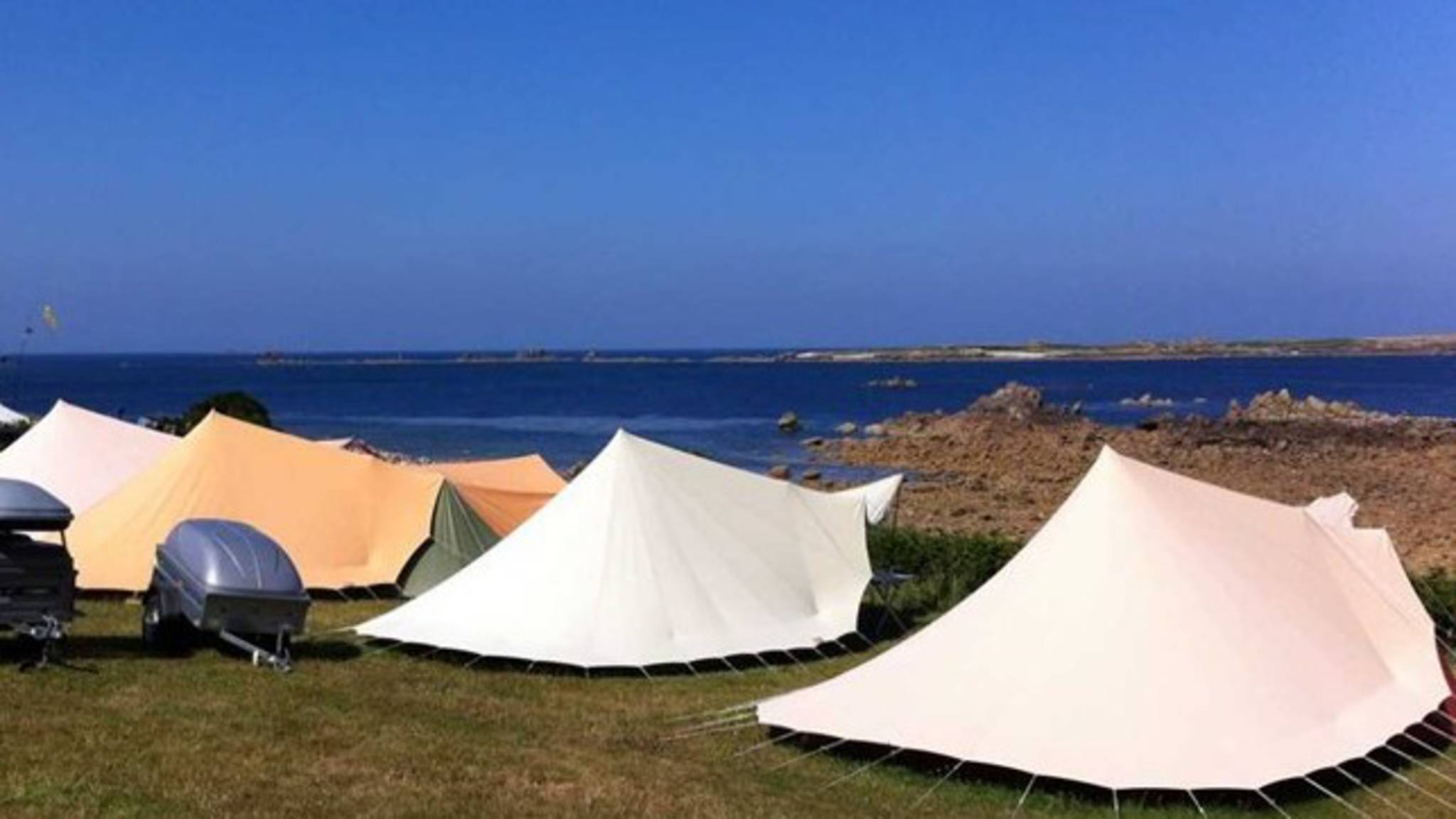 All the tents you see in these images are cotton.

Cotton is a more durable material, it is stronger and thus more weatherproof, it breathes naturally, it doesn't look soggy when wet.

(Incidentally, in my family we call the type of erecting the tent seen in the second image — with the opening away from everybody else — De Waard style, after the brand of tent pictures; a rather introvert way of camping!)

There are advantages of a synthetic tent:

From your question, I deduce that in some parts of the world, such tents are not popular even among families car camping. I would speculate that such families are either in caravans, campers, or "glamping", or perhaps not willing to spend the money for a cotton tent. The market probably relies on families having long holidays. Which is consistent with the other answers referring to scouts: scouts do spend 8 weeks per year plus in their tents (I think), which makes the expense worth it. Families who can only go for 2 weeks per year (USA?), not so much.

I think your question spells out pretty well why people prefer other materials (cost,weight) and they really aren't used for backpacking where weight matters.

The times I have ever seen them in use it was an outfitters camp where the tents are setup for an extended period of time and they had had mules/horses to pack the tent in. The other use case is car camping where the weight is less of an issue.

Beyond that there really isn't a use case for them.

Horse packers still use canvas wall tents. Almost indestructible if you don't store them wet. But a 9x12 wall tent can weigh over a hundred pounds, and much more if wet. These same packers have the weight allowance to pack cast iron cookware and sheet metal stoves with chimneys. This class of tent is usually packed in to a base camp, set up, and left up for the entire season. Packers bring clients in, and do day trips either for nature stuff or hunting from that camp.

Mostly nylon tents now have a breathable tent, and a waterproof fly.

Much of the breathability of cotton comes from little attempt to make the closures tight. Bug resistance is not a term I associate with cotton tents.

The theory of cotton is that it breaths until it gets wet. When the cotton fibers swell, they close the openings in the fabric and keep (most of the ) water out. In practice every cotton tent I've seen either was waterproofed with some combination of wax, turpentine and zinc stearate, or it leaked.

During the Klondike gold rush, the better mushers used silk tents. VERY light weight compared to cotton. (Silk is very strong) This saved significant time during limited daylight in setting and breaking camp, as well as making for a lighter load.

23
Why tunnel tents for the poles, Geodesic for the mountains?
28
Why do people who backpack sleep in tents instead of tarps?
8
Why not use a cotton base layer?
24
Why do most tents have black floors?
5
Why do people lock their tents at Everest Base Camp?