Raccoons are creating ridiculous problems in our house. They used to eat our garbage and destroyed our vegetable garden. Once we tried to trap them with metal box by placing peanut butter in the middle of the box. But only one of the raccoons was trapped but the rest remained outside. Next day we again placed the metal box to trap them but none of them entered.

Please suggest me a better option to relocate raccoons?

If you are satisfied with trapping raccoons one at a time, I recommend the cat-sized Havahart Trap. These traps come in many sizes, from mouse to coyote and maybe larger.

I have no affiliation with Havahart. As far as I know, I do not own stock in their parent company, but I can't swear to that.

I've used the trap to trap cats for neutering and then releasing, and have trapped an opossum accidentally and a raccoon intentionally. In all cases, I used a high quality dry cat food, and enough for more than a snack. The W75 model looks the closest to what I used. As you can see, it is not cheap!

All I have done is reduce your problem to the problem of how to "store" multiple raccoons so you can release more than one at a time, for example releasing a mother and her kits into the same area. And how to relocate them so they have a chance of thriving.

On the relocation question, you may have a wildlife rescue group in your area who can advise you on relocation locations. For example, in my area, we have the Wildlife Rescue League of Northern Virginia, and they would be the first people I would call in your case. They were very helpful to me when I had to find a place for an orphaned baby raccoon.

The answer of @Karen is the best. She is right on about the dangers to the animals of relocation, and what you can do on your own property to coexist more peacefully with them. If you are in high density suburban development, you will have to get the cooperation of your neighbors on the tactics she advises.

You might try different bait, something that's more smelly like wet cat food or supposed to work better like marshmallows. If you can at the same time limit the other things they might want to eat, the better off you are.

Try not to touch the trap with your bare hands, usually, when trapping you don't want your scent on the traps.

You will also want to check the laws on relocating, some places don't care and others require a permit or have limitations on how far they can be relocated.

Raccoons are smart. They know that one of them got caught in the trap and they know that by going in, they risk the same. If you're patient, it's likely you'll catch more within a few weeks or months. But you should really reconsider whether relocation is the humane option you assume.

If you release wildlife into a new area, it's often leaving them to starve slowly. At your home, they have a territory they know well. They know where the food is, they know where the shelter is, and because it's familiar, they've got a leg up on keeping other raccoons out. If you put them someplace new, they won't have any of these advantages and will likely starve to death or be killed by predators within a few weeks. And then next year, the raccoons you didn't catch will come right on in and take over where last year's raccoons left off, along with all their kids.

Another Look at the “Humane” Alternative

You don't give your location, but in many places it's illegal to relocate wildlife for the reasons above and it's preferred that you simply kill them rather than try to make them someone else's problem. Check with the local wildlife authority.

The best way to deal with raccoons or other pest wildlife is to eliminate their food source. The absolute biggest thing is to not leave your garbage accessible. With raccoons, that can be as simple as a bungee cord across the bin. If they unlatch or chew though that, then look into chaining it closed, buying a locking bin, or put the bins in a shed or garage when not in use.

For your garden, build a fence or try a product such as predator pee to frighten them off. An electric fence is usually effective, a simple barrier fence can work as well as long as it's well constructed.

Raccoons are extremely clever and will quite easily try to outsmart you if they can.

Some years ago I had a huge problem with raccoons at our henhouse. One day, while talking to a state trapper, he suggested that I build my own human trap based on the Havahat Trap system, except much bigger. The trap I designed was 2’ (feet) by 2’ (feet) square and 3’ (feet) long. He also suggested that I put the bait under the trip pedal and not on top of it, as raccoons will simply take the food and go. The trigger pedal worked if it was raised or stepped on.

End result was that I was able to catch multiple raccoons at a time. I caught 5 at once (mother and 4 little ones). Of course, I relocated them many miles away. Raccoons that are living in the wild, near dwellings can easily relocated since they know how to forage for themselves. I always released them near a water source such as a stream or river.

Drill a narrow hole in an old log, place a piece of shiny metal at the bottom, and insert a series of nails facing downward. The space between the nails should be just enough that the raccoon can put its arm through, but too small for its clenched first to fit as it tries to pull the metal back up.

This site describes designing and using a more modern version with pvc pipe. 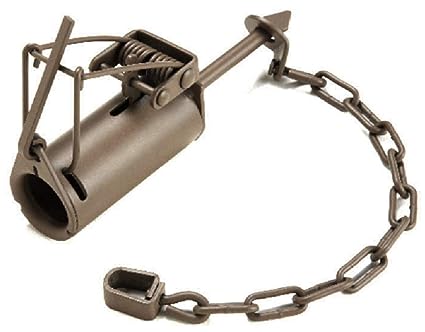 Not the answer you're looking for? Browse other questions tagged raccoons trapping or ask your own question.

7
How can I keep outdoor critters outdoors?
6
How can my neighbor encourage chipmunks to move away from her front-yard flower garden?
3
When, and how, is it safe to relocate a burrow of chipmunks without harming the young?

6
How effective is survival trapping?