Why use string walking in archery to change the distance of your shot?

Having a 3-under allows for string walking. What this is, is basically the ability to pull the string at a different position hence changing the distance of your shot.

Why would one use string walking instead of just adjusting your aim?

tldr: string walking is used with the goal of not moving your aiming point during a change of target distance. It's the equivalent of adjusting your sights in recurve

I'll paint a little picture for you.

Imagine that at 30m you're able to line the tip of the arrow with the target gold and your shots are accurate.

Barebow: If you didn't string walk at all, you'll probably aim the tip of the arrow at the top of the target (which definitely isn't ideal) to get more distance. What's going to happen if your poundage isn't high enough such that you need to aim even higher? You'll end up with no reference point since you'll essentially be aiming at the sky. Instead, you'd pull a little lower than usual but keep your arrow tip on the center of the target. Voila.

For comparison (and as a little extra knowledge)

Recurve: We've got sights and can adjust the sight pin up, down, left or right. So moving from 30m to 50m, we just need to lower our sights. In recurve, we normally calibrate our sights so that we know exactly where we need our sights (our sights have a numbered scale, check out the picture) to be at when we change distances. Example, at 30m my shots land in the center with my sights adjusted to 31. At 50m, it'll be at 49 and my sights will still be aimed at the center. I'll know these numbers from calibrating from performing sighter rounds.

So you see now, that string walking is basically the equivalent of moving the sights in recurve with the goal of not moving your aiming point during a change of target distance. 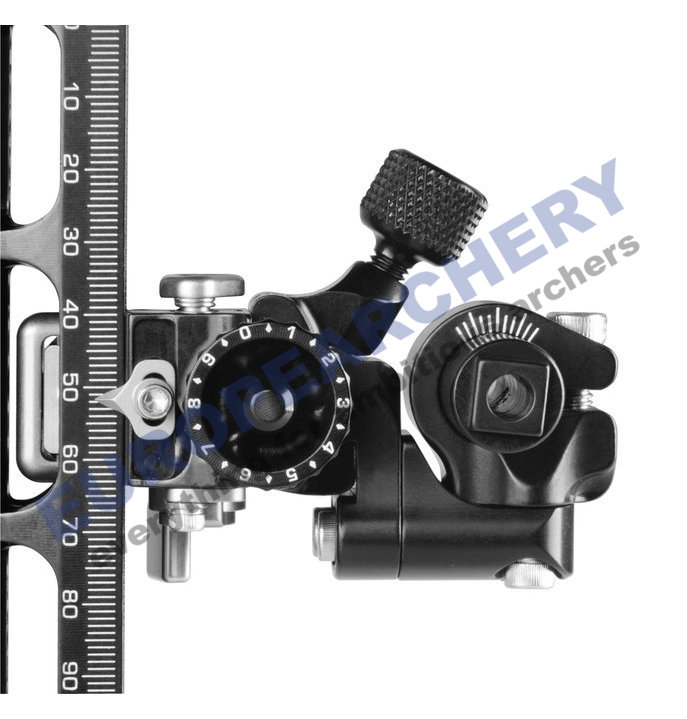 Not the answer you're looking for? Browse other questions tagged archery or ask your own question.

7
What would be the advantage of the 3 fingers under release?

8
The bow's length and its influence
5
Broadhead tuning