What are known failure modes of the auto-braking mechanism of Grigris?

Disclaimer first: The brake-hand principle (always hold the braking strand of the rope) always applies to assisted braking belay devices, including the Grigri. This question is in no way targeted at putting that in question, follow it at all times!

In a recent question about quickly belaying on top rope, some discussion happened in comments about how the braking mechanism of a Grigri can fail. In general, the Grigri is known as a very reliable, while bulky tool for belaying with a brake-assistance.

Now excluding user failure (e.g. fully holding the Grigri in one's hand and thus disabling the braking mechanism), what scenarios are there in which the Grigri will not by itself start braking and finally arresting a fall?

In addition: What is/are the countermeasure(s) to let the braking mechanism engage in the respective scenarios?

I am only looking for scenarios which can be/have been demonstrated (in practice or in a test setup), not in hypothetical problems.

There are several scenarios but they all boil down to not using the brake hand but instead hoping the device will catch or improperly sized ropes.

3) routes with bulges or significant rope drag that reduce the forces of a fall; and

4) hanging on the rope (versus falling) mid-route.

Learn Proper Techniques for Grigri Use

In all of those situations, the solution is to keep a hold on the braking strand and not let go. Once the rope goes tight between the climber and your hand the cam will engage.

It's worth pointing out that these are assisted and not auto belay devices, you can't just not pay attention and expect them to work.

To add to Charlie's answer, a big mistake would be to hold it improperly. Specifically, if you hold the bottom of the Gri Gri you can actually prevent the auto-braking to engage. And especially when a climber falls and the belayer panics! 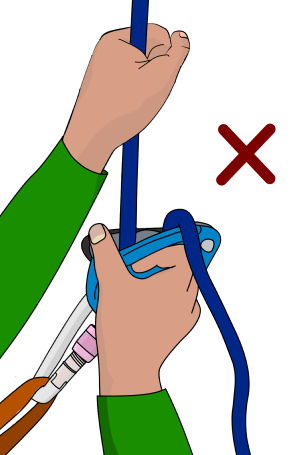 Not the answer you're looking for? Browse other questions tagged safety climbing belaying gri-gri or ask your own question.

4
Are there GriGri-like devices that support auto belay rather than assisted belay?
6
Can a Gri-Gri work if the cam is prevented from engaging?

25
How should I vet belayers? What should I look for?
4
What is the working range of TRUBLUE auto belay?
6
Grigri+ vs grigri 2
2
What are the steps in the PBUS method of belaying?
28
What is the point of belay glasses?
8
What safety concerns are there about automatic belay machines?
8
What is the v-notch on top of the “Clickup” climbing belay device for?
12
How to belay top-rope climbers who are ascending quickly?
4
Are there GriGri-like devices that support auto belay rather than assisted belay?
5
Why do the GriGri and rope tie into different points on a rock climbing harness?