Looking up fish species by body of water and vice versa

U.S. here (and specifically New York state but that's probably irrelevant). Is anyone aware of any websites, apps or DEC resources that allow you to look up what fish species live in any given lake/pond/body of water?

Ideally there would be a "two-way mapping", meaning:

I was hoping on X maps would have a layer/filter for something like this but it doesn't appear that they do. Any ideas? Thanks in advance!

Here are a few sources I found, in order from most user-friendly to most technical.

iNaturalist has data about where fish were actually observed. Anyone can post geo-located pictures of organisms they've observed and get help identifying them. They currently have 2,475 observations of fish in New York state, which unfortunately is a little sparse. You can see those observations distributed on a map, and filter them by species or date. It's a good way to see what people people near you have caught recently.

An old-fashioned field guide can be a great resource. Atlas of Inland Fishes of New York is available as a pdf file for free from the New York State Museum. It has 179 species distribution maps. You can also view the maps on the DEC website, Fish Atlas Maps of New York. 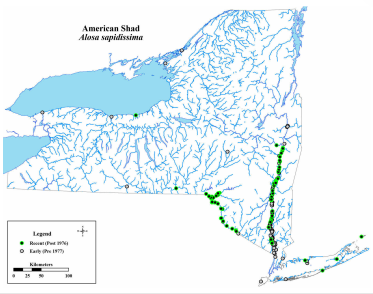 This resource doesn't have the "two-way mapping" feature you wanted, but if you can find the source data that was used to make the species maps you could use it that way.

The New York Department of Environmental Conservation has information about where to fish for a few major species:

They also conduct surveys of where fish are being caught. Summaries of those reports are here.

Various datasets are available through data.ny.gov, for example:

benthic macroinvertebrates, field chemistry, and at some locations, sediment, fish or diatoms

I was able to find the sampling locations on data.ny.gov, but not the actual fish sampling data. However, if you request it they will probably provide that data to you. There's a link to contact the dataset owner on the dataset page, or you can contact the Bureau of Fisheries from the contact info on this page. (I have made similar requests for fish sampling data from the Ohio EPA. They were happy to email me the data I requested.)

There's a link on the sidebar of the Fish Atlas Maps of New York to a website called FishBase. It's basically a crude interface for a worldwide database of fish data, including distribution maps for hundreds of freshwater species. I haven't fully looked into it, but there might be an enormous amount of useful information there.

I can't speak for NY, but in TN we have a government produced document (PDF) that lists which species are present in the state and where they might be found as a generality. I don't know if there is any publicly available mappable data, but I would be willing to bet that the local wild-life resources agency will have fairly detailed data for fish stock management, which they may or may not be willing to share.

In the US, get a fishing license, it should come with a book that describes the kind of fish you are allowed to catch and the ones that must be released. It will have fairly comprehensive listing of which fish are in which bodies of water.

It should include good quality illustrations of the fish you might encounter and how to tell them apart from similar fish in the area.

Alternately in many/most/some? States you can go to anyplace that sells fishing licenses and get a copy of the book without getting the license. But if you care enough to be concerned buy, the license, all the money goes towards conservation and restoration.

In 2018 alone, fishing license sales generated more than $700 million across the country. One hundred percent of license fees go directly toward conservation and restoration Source

P.S. Having a license does not mean you need to fish.

Not the answer you're looking for? Browse other questions tagged fishing maps water or ask your own question.

23
When to kill and bleed a fish
4
Is it ok to bleed a fish in muddy water
10
What are the best practices to ensure survival of catch and release fish?
12
Why do some fisheries have a lower size limit and others have an upper size limit for keeping fish?
10
Allergic to Neoprene and need water shoes
4
How long can fresh water fish live on a stringer?
8
What is the reasoning behind not disposing of fish guts in the water?
15
Can I get fresh water from ocean fish flesh?
3
Single walled plastic vs vacuum insulated water bottle for hiking and everyday use
2
Catch and eat the Fish UK