Is sleeping on the ground in cold weather better than on an air mattress?

Effectively, it isn't much better to sleep on an air mattress that isn't specifically made to insulate from the ground than on the ground itself although it does make a slight difference.

The main takeaway is that you should always avoid sleeping directly on the ground so even a poorly insulated air mattress will be better than nothing.

Your friend isn't right in assuming the air in the mattress will stay at ambient temperature as you are constantly heating it and it doesn't mix with the rest of the air outside of the mattress. It should remain a bit warmer than the air around although it would lose heat both to the air and the ground and as such won't be very effective.

There are three mechanisms involved in losing heat to the ground when camping (provided the tent is setup on the ground). 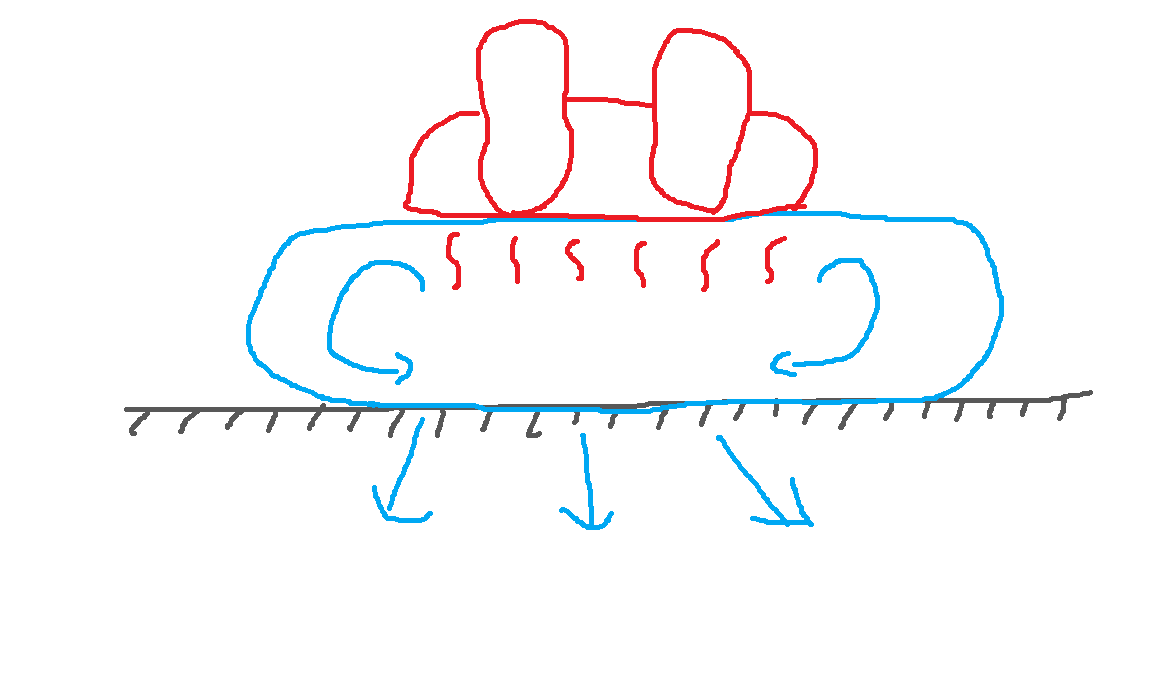 There are a few ways to combat the heat exchange in an air mattress:

Some brands combine those solutions (mainly baffles and reflectors) to reduce bulk and weight although you then have the issue of mattress integrity. If not airtight, an air mattress is useless.

The higher the R-rating, the better your mattress will be at keeping you warm. As noted on the MEC website in the How to choose a sleeping pad article:

As a reference, the 12cm thick Reactor Air Double Mattress from MEC has an R-rating of 1.5. This is even though there are basic structural baffles inside. This is a laboratory measured rating, which is accurate. As you see, the effective insulation is marginal and won't even work in the interseasons, nevermind in the winter.

There are many field experiments that have been conducted (intentionally or not) where the end result is that a plain air ballon mattress isn't insulating at all. In my 8 years of outdoors retail, I had plenty of angry customers coming back to the store with a summer mattress saying they hadn't been able to sleep all night when in the intermediate seasons when the ground freezes or sometimes winter when camped on snow, even if they had a sufficient sleeping bag.

The blue foam sleeping pads will maybe fare better than an air mattress but I can't confirm first hand. On frozen ground, open cell foam like the blue stuff is usually not considered enough and closed cell EVA is preferred (like Evazote yellow pads from Zote Foams).

Regarding foam pads, I had the ability to do a field test with a friend. We both had -20°C sleeping bags, a 1" self-inflating Therm-a-Rest, and EVA foams. Mine was 15mm, his was 10mm. The first night's air temps was around -15°C but the next morning, he complained of having chills in his back all night. Since we had a few other pads with us, I proposed he use a 15mm that night and even though the air temp went as low as -25°C, the additional 5mm was enough to cut the cold from his back. There was no other changed variable.

There is an old adage

One blanket underneath is worth two on top.

but I can find little support for this idea except a mention on mumsnet.

The reasoning is, that the floor or the ground underneath is solid, and has a much higher thermal capacity than the air above, and so will draw a lot of heat away from your body. It's not just the temperature of the surroundings which matters, but its ability to draw heat from you too.

If you have ever worn boots or shoes with air-cushion soles, you'll know that your feet stay warmer than in those with solid soles, which conduct heat better.

So any kind of insulation between you and the ground is worth having.

Of great benefit too, is to sleep on a waterproof ground sheet, which prevents moisture travelling up to your bedding and body from the ground. Dry bedding is a better thermal insulator than damp bedding.

Air circulation in the mattress causes some heat loss by convection, but will be much less than by direct conduction to the ground. If taking an air mattress with you is an option, then you will be more comfortable, but warmer than sleeping on the ground.

1) Even if the air in the air mattress was the same temperature as the outside air it has much less thermal capacity and thus will take your heat away slower.

2) An air mattress will spread the pressure more evenly--your sleeping bag won't be as compressed at pressure points and thus heat will escape from them slower.

Your friend isn't thinking clearly. Imagine they had asked the question:

On a cold night, is sleeping naked and unprotected better than sleeping in a sleeping bag?

Everyone intuitively knows that you will be far warmer inside a nice, lofted sleeping bag. The insulation retains your body-heat and prevents the cold air outside from reaching your skin to cool it.

Exactly the same argument applies to sleeping mats - the more insulated the mat the better it keeps your body heat in and the cold of the ground out by reducing radiation, conduction and convection. Your friend is right in the limited sense that an uninsulated mat won't provide significant protection, but a well insulated mat will make a dramatic difference.

Anyone who spends a night or two in cold conditions will discover from direct and potentially harrowing experience that an insulated pad is vital for comfort and safety. Your sleeping bag alone is little help, because the insulation will be crushed under your body and provide little protection from the ground. The best bag won't help if your pad is under-specified for the conditions, so all experienced winter campers give high priority to a well insulated mat. (In a survival situation, you should improvise ground insulation from something you are carrying, like a rope, or from a natural resource like heather or forest duff).

In response to customer demand the industry is at last rolling out proper standard (ASTM FF3340) for measuring the insulating value of mats in a rigorous and consistent way. So from 2020 it will be possible to purchase mats with a known insulation value that you can confidently match to the conditions and your personal physiology (because some people sleep much colder than others).

TL/DNR: a well insulated sleeping mat is vital for comfort and safety when camping in cold weather. This is beyond any reasonable dispute.

Happened to see this and had to register just to reply because I have first hand info. I was fixing up an old mobile home and had removed the skirting and slept on a air mattress in a room with a wood stove. I thought it would be ok but since the floor was the outside temp the air mattress became ice cold. The air in the air mattress just gets colder and colder since the ground sucks any warmth and it never diffuses or has anywhere to go. It was better after I put a piece of carpet between as someone else has mentioned. Unfortunately your friend is right.

Not the answer you're looking for? Browse other questions tagged gear camping cold-weather or ask your own question.

10
Is sleeping on a yoga mat better than on an airbed during winter camping?

14
Sweating in sleeping bag
12
What sleeping gear should I use in a lean-to?
8
What clothing would be suitable for hiking and camping in 0°C?
10
How does drying stuff in your sleeping bag work?
6
Can a cooler (warm weather) sleeping bag be used when combined with a warmer (cold weather) under quilt for hammock camping?
45
Why do I always wake up freezing?
7
How warm should a sleeping bag be to sleep in summer in the Alps comfortably?
4
What methods can be used to keep a cooler cold longer?
10
Is sleeping on a yoga mat better than on an airbed during winter camping?
0
Help with choosing camping gear