Are ski areas in the United States shutting down?

Interesting video I ran across. The high point are quotes from sugarbush's president. All the rest information is less important, except for statistics. I'm not sure where they got their stats. NSAA stats show skier days per skier are stable as are skier days per year. http://www.nsaa.org/media/378733/participants2019.pdf

My take is that skiing isn't growing very slowly with more skiers going to the big ski areas and less to the small ones. We'll likely lose more of the small ski areas but I don't foresee any major changes.

I have been digging a bit for numbers and it turned out to be surprisingly hard. Although I have been hearing every now and then about a ski resort that has been closing, I have not found much of data to put this into context.

Unfortunately, this fails to give any scale on the number of skiers. The graph is a bit unfortunate as it puts millions of skiers into a stack chart with hundreds of resorts. I also looks like the number of resorts is supposed to increase from 2005 to 2020
This statistics do not go into any detail what they counted as a ski resort (minimum size?)

Jensen divided the nation’s ski areas into segments that included a mere 45 “uber” and “alpha” resorts with climbing revenues, 150 “status quo” resorts with flat revenues and a dire prediction that some 150 ski areas in the U.S. are barely surviving and another 150 are dying with declining revenues, minimal investment and no destination traffic. (source)

This again sounds pretty alarming with 150 resorts dying. This is unfortunately not going much more into the detail how the number came up.

Highlight - Skiing is not dead! For the second year in a row, the winter season 2017/18 shows again a global trend upwards. Even if, as usually, some countries or regions performed better than others, this gives a positive sign after 3 years of decline. Although the worldwide ski industry faces challenges and the numbers of skiers in western countries tend to be more or less stagnant when not decreasing, the global performance remains at a high level. The 2017/18 winter globally ranks as the 4th best ski season of the new millennium. (source)

This is taken from what appears to be a consultants page. He has a very detailed report published that lists the skiers by country. On page 15 of this report we find the following figure: 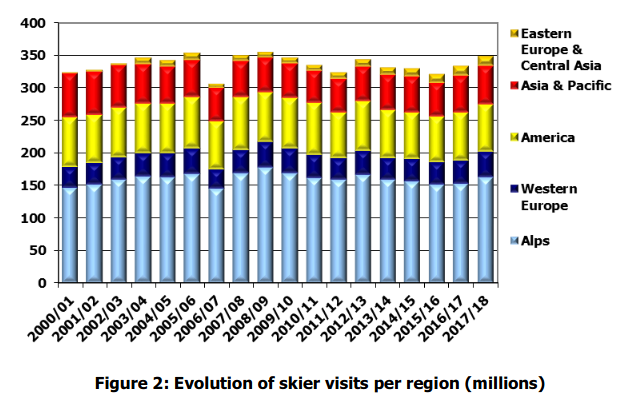 Again stack charts are not really making life easier and seasonal influence does makes it difficult to spot trends for a region. In the Europe it seems that there is a small long term growth. The US seems to be about stagnant

What does this mean?
The number of resorts is probably a very unreliable measure. If neighbouring ski resorts merge, the number of ski resorts decreases but nothing is closing down. Prominent examples in the Alps are Aletsch Arena (former 3 resorts) or Saalbach-Hinterglemm-Leogang-Fieberbrunn (yes, that is 4 names).

Looking at the number of skiers things do not look as bad. However, this can be deceiving if different age groups have different activity and different spending habits.

Looking at a selected region can be problematic if skiers from one region do not stop the sport but go to another region instead. For example, the resorts in Switzerland had a rather rough decade mostly due to the exchange rate of the Swiss Franc which made it rather expensive for foreigners. For example this article claims that the number of Swiss skiers increased while at the same time the number of school ski camps decreased strongly and the resorts had a bad time.

Some things are very region specific. While researching, I was shocked by the average day pass in the US being above 100$ and top resorts charging 200$. A top area in Austria is costing 5x€ and even in pricey Switzerland a top resort like Zermatt costs "only" 100 CHF with most ski resorts being in 55-65 CHF range.
Another factor specific to the US is the huge distance to travel to the mountains and the small number of vacation days.

For sure the next decades will see a number of small, low altitude resorts being wiped out. Here in southern Germany we have quite a lot of them, ranging from a single T-bar lift to small resorts with a handful of lifts. Those are threatened by unreliable snow but too small to invest in artificial snow. Even if they do, there is still the risk that a warm and rainy day melts all the expensive snow (as happened in this winter already at least 2 times).

Conclusion
I think this quote sums it up quite nicely

On the western markets, the high competition to ski activities combined with the demographics and the stagnation of the middle class do not provide for substantial development perspectives. In addition, with the exception of a few resorts in Canada, no new resorts have been created in the traditional markets. (source)

Some resorts will go out of business. There is little chance that any new resorts are created. In most parts of the Alps it would even be illegal to create a new resort. Even if it was legal, founding a resort would need a better perspective than a stagnant market and possible issues with climate change.

edit:
Searching for the history of the closed ski area Ernergalen (which is now a great place for ski touring), I found a good statistic on ski areas in the upper Wallis (Switzerland). Of 25 ski areas and 21 valley lifts, 17 have been closing down from 1985 to 2016 with the bulk of it being 13 valley lifts. However, one needs to be aware that many of the closed areas seem to be founded in the early 80s. Also the total transport capacity of ski areas in the upper Wallis has increased considerably during that time due to modernization of lifts

Climate change means ski resorts at mid-latitude lower elevations are doomed. Winters used to be colder and snowier than today, and lower mountain ranges such as the Ardennes or German Mittelgebirge are no longer sure to get snow in winter. If they haven't shut down yet, it's a matter of time until they will. There's only so much you can do with artificial snow when it's +10°C outside.

10
Why are American ski resorts so expensive?