Alternating between twin and half rope technique

Is it possible to change within one pitch the climbing style from twin to half rope mode or vice versa? The assumption is that the ropes are certified as twin and half ropes.

When leading a pitch I will sometimes switch from twin to half, but never back. Here's why.

First, some definitions, assuming you're climbing with two ropes that are certified as both twin and half:

Normally when climbing using a half rope technique, the leader will alternate clipping pieces or try to keep one rope to the left side of the climb and the other rope to the right.

The reason why you shouldn't switch from climbing using two ropes as half ropes to using them as twin ropes is that in the event of a fall, the two ropes will have different lengths paid out, and will travel at different speeds through the "twin" pieces of protection (those where both ropes are clipped). That causes increased friction between the two ropes, which could cause anything from increased wear to rope damage.

Switching from twin to half is fine though, in the event of a fall the twin ropes will travel together, then separate and each rope will rub against its own pieces.

One more note: If you find yourself leading in half-rope mode but only have a single piece that you want to clip both ropes to, you can still do it but you should use two draws so that each rope can travel freely independently. 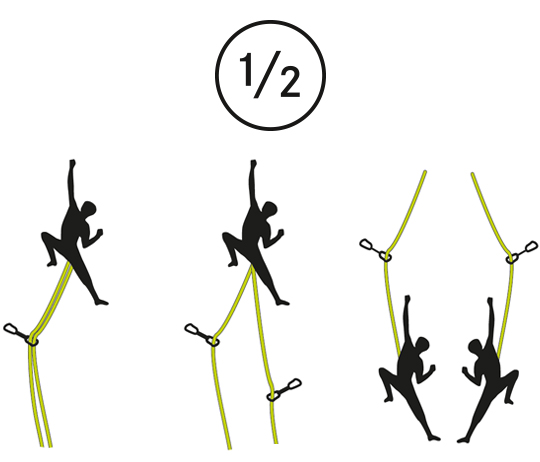 (source)
If a rope is certified both as twin and half rope, it is allowed to clip either a single strand or two strands.

If you alternate your clipping style within one pitch, you might be facing more rope drag than necessary and not used often. However, there is one notable exception. Most belay devices (tube!) are very sensitive to having your brake hand in the correct place. If the rope is running upwards, it needs to be below your device. If the rope is running downwards, it needs to be above the device to break.

If you were to clip only one rope onto the first quickdraw and fell on it and your rope gets cut, the belayer would be required to yank their hand upwards to stop your fall past the belay. Even with an experienced belayer, this is rather unlikely to happen as it is a "once in a lifetime" situation. Therefore I prefer to clip the first bolt with both strands if it does not add too much friction. The pull of a fall will now always be upwards.

Is it possible? Anything is possible, and sometimes emergencies require creativity.

Should you do it? No, but it does depend on your rope rating, here's why:

Twin ropes are rated to be used as a pair, they aren't UIAA rated to to take the requisite number of falls individually. When climbing with twin ropes you climb as though you only have one rope and always clip them both together. If you're following a wandering line, you need to extend your protection as you would when climbing with a single rope. If you were to switch from twin to half-rope technique on twin ropes, then take a fall, you're going to fall twice as far because all the force is going into one rope which will over stress it, over stretch it, and present an increased likelihood of failure.

Half ropes, are always clipped individually, there is never a need to twin-clip them, and doing so actually will double the impact force on your protection and onto your body when you do take a fall. The ropes are individually rated to catch you, so if you double up then you're more likely to cause your protection to fail, as well as sustain injury. Only clip one of your ropes at a time when you're half roping.

Here's the catch: some ropes are rated for single, twin and half rope technique. These ropes could accommodate you in whatever unique situation you find yourself in. There is one school of thought that is concerned about rope rub when alternating techniques, but there is another that says the amount of potential friction generated is negligible. One rope rubbing over another might cause some damage, but two rope slipping past each other is less concerning.

Not the answer you're looking for? Browse other questions tagged rock-climbing belaying rope-management or ask your own question.

15
What should I look for in a rope for climbing?
14
What's the best way to swap lead when climbing in a group of three using a pair of half ropes?
20
Is it safe to cut a climbing rope in half?
6
Do Half/Twin/Double Ropes get Middle Marked?
11
How to top belay 2 climbers at the same time on multi-pitch climb?
35
What is the difference between "dry rope", "non-dry rope" and "dry core rope"?
6
What do you do when you're rappelling a halfed rope and you run out of rope on one side?
7
What kind of ropes are used for very long sport routes (like Chilam Balam)?
7
Climbing indoors: emergency situations
5
Multi-pitch sport climb: Rope too short for rappelling, but having a backup rope