A river of moss - what to call it?

Is there any distinct term or phrase (biological or otherwise) for this pattern of mossy growth within a stream-bed?

The photo shows little moss islands on individual rocks, within a very sodden & muddy stream, which had a fairly low flow. I think the photo gives an accurate impression of the gradient of the terrain.

I took this photo yesterday (April 5th) at a time of year when the greenery of the moss is particularly obvious, but I've seen this pattern of growth before in other places as well; I think it is actually quite common at large & small scales. Similar moss enclaves can be found on vertical banks of rock where water weeps out, etc. But I don't have any idea what this might be called (if anything).

(I'm not particularly a plant person, so perhaps an answer will be more obvious to someone else than it was to me! Googling around "moss" and "streams" or rivers seems to be too broad to be useful; probably I don't know the ideal keywords which seem likely to be taxonomic, geological, or otherwise technical.) 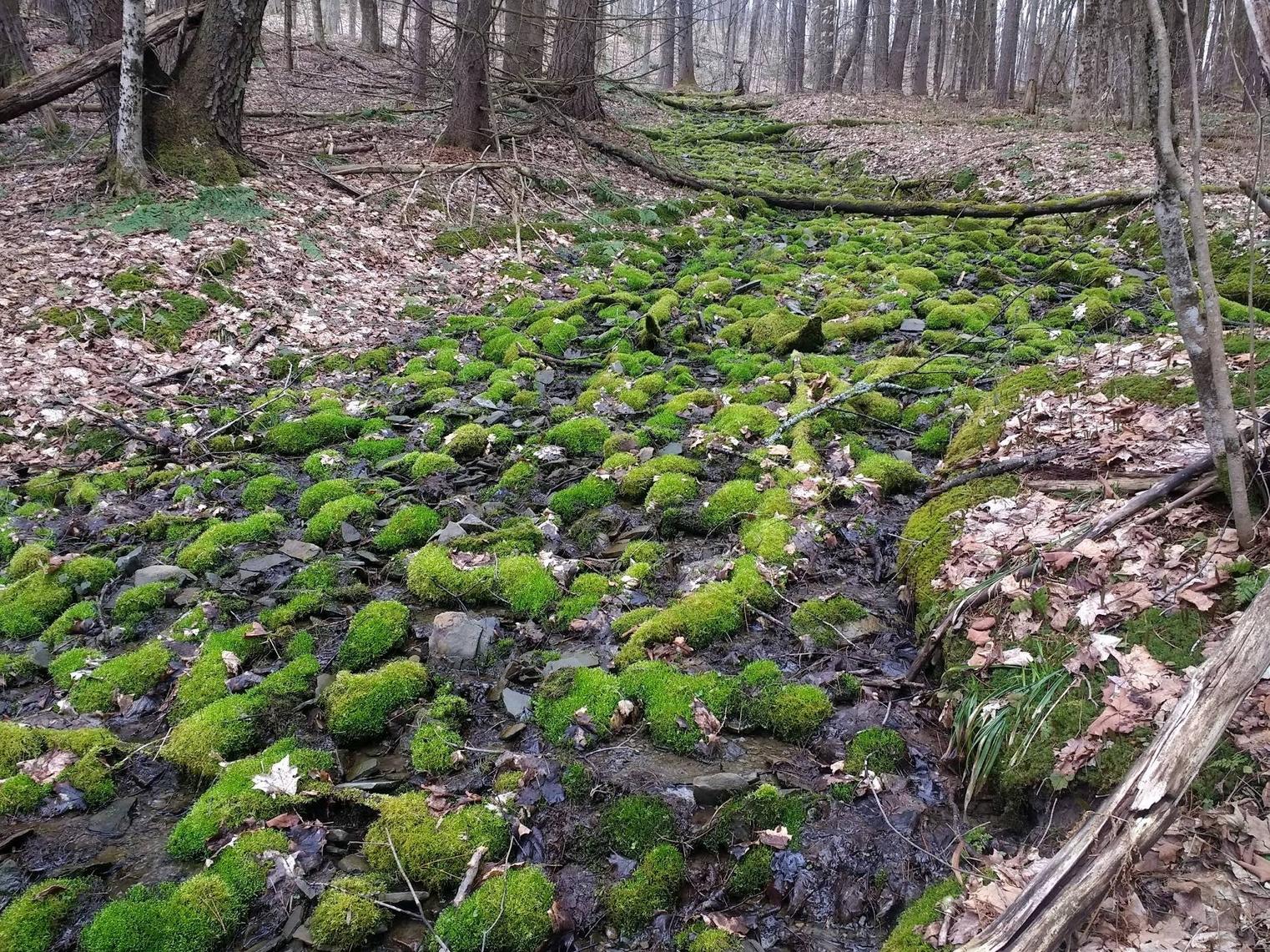 Bog might be suitable. It is also possible that it could be an ephemeral stream. Seepage is the term for very slow flowing water coming out of the ground, so this might be a seep.

Edited to add: The above answer doesn't directly address the name of the mossy bits - the moss is a result of the dampness, not the cause (though some species can create bogs themselves, such as sphagnum moss). Those islands are quite possibly areas where the moss has built up over the years, probably with some substrate such as a branch or stone to start them off.

It is simply called a mossy patch that extends the length of a creek bed, perhaps an ephemeral stream or an intermittent stream.

Ephemeral stream: A stream that flows only briefly during and following a period of rainfall in the immediate locality.

It is definitely not a bog.

A bog or bogland is a wetland that accumulates peat, a deposit of dead plant material—often mosses, and in a majority of cases, sphagnum moss. It is one of the four main types of wetlands. Other names for bogs include mire, quagmire, and muskeg; alkaline mires are called fens. They are frequently covered in ericaceous shrubs rooted in the sphagnum moss and peat. The gradual accumulation of decayed plant material in a bog functions as a carbon sink.

Bogs occur where the water at the ground surface is acidic and low in nutrients. In some cases, the water is derived entirely from precipitation, in which case they are termed ombrotrophic (cloud-fed). Water flowing out of bogs has a characteristic brown colour, which comes from dissolved peat tannins. In general, the low fertility and cool climate result in relatively slow plant growth, but decay is even slower owing to the saturated soil. Hence, peat accumulates. Large areas of the landscape can be covered many meters deep in peat.

It is impossible to say what species of moss it is from the photo.

Not the answer you're looking for? Browse other questions tagged water plants plant-identification or ask your own question.

14
What are safe/effective leaves from around the world for use in tidying up your backside after answering the call of nature?
6
What is this plant? Is it Poison Oak?
12
What are these strange seeds that looks like a mini porcupine which you can find all over Germany?
10
What is this plant in England with large veined leaves and multi-part buds?
2
What are these clusters of tiny dark blue berries found in the Southern Canadian Rockies?
2
What is this plant with fluffy white flowers in the Canadian Rockies?
5
What are these small blue berries growing in clusters on a medium size bush in Southern Ontario, Canada?
6
What plants can be heard when they are growing?
2
What is the best way to cross a wide river in winter?