How to lash a corner of a bamboo pergola?

I'm considering building something akin to a bamboo pergola and tying it together with a rope. What would be the best method for tying its 'corners' where three poles meet?

From the Wikipedia article on lashing and browsing other sources it appears that the likely choices for tying such 'corners' together are either to use square lashing twice or tripod lashing, but probably the first.

However, I came across images of bamboo scaffolds that to my untrained in lashing patterns eye seem to show a single binding at the 'corners'. Could that be the case? 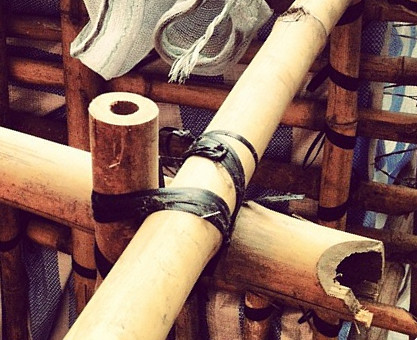 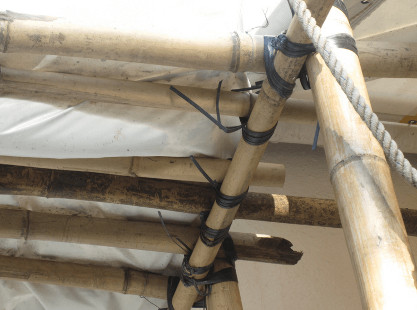 To connect two poles (of roughly equivalent size) in a square angle you should be using the square lashing, as you already suggested.

Here is a good animated tutorial showing how to tie it:
https://www.animatedknots.com/square-lashing-knot

Note the steps no. 13-16 from the above tutorial, where you basically "circle" your lashing between the two poles on the plane of the two poles. This is the crucial step that makes the square lashing tight and will fix to the poles tightly.

To fix three poles together in right angles I suggest first fixing two of them using a square lashing, and then fixing the third one using another square lashing. This will also be a lot easier than trying something fancy while having to hold in place 3 separate poles to work the rope on.

Source: I learned this in the boy scouts, we have used this to build multi-story towers out of pine poles able to easily carry multiple people per story. When done correctly it is rock-solid.

Note that when used to bind bamboo poles or other poles with a low-friction surface I suggest you add a couple of extra windings to each step to make sure there is enough grip.

Not the answer you're looking for? Browse other questions tagged knots shelter knot-identification or ask your own question.

14
How do I tie a Prusik knot?
8
How do I tie a stopper knot?
12
How can I build a safe, effective igloo?
5
How to prevent an autoblock knot from twisting?
9
How do I distinguish a dirt floor in a cave from a floor formed of very old coprolites?
10
How much difference does wind chill make if you are inside a snow cave?
7
How to tie a Purcell prusik?
3
Portable canopy leg weights, how heavy?
5
How to join 2 cables together with fishing line without putting knot in cable?