Grilling in the wilderness

I've got a question.. What will be the best option to smoke meat outdoor? I'm worried about maintaining temperature, to not burn it. I tried to that on my backyard before I can march to the woods. But I didn't want to burn steak, so to my opinion, it is undercooked. Picture will be attached. So, I'll appreciate any advice on how can I cook it effectively. 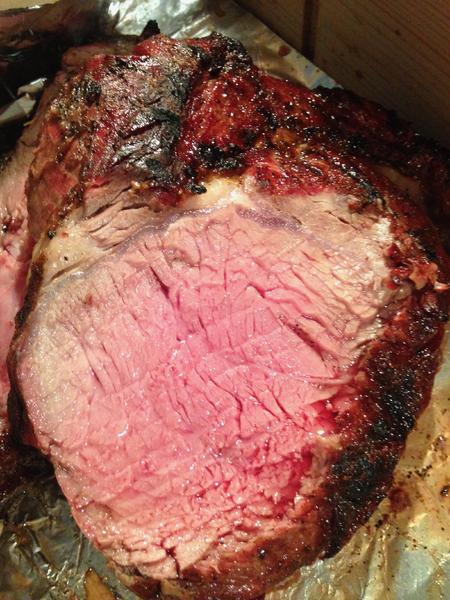 cooking camp-fire-cooking
Share
Improve this question
asked May 14 '20 at 13:21

The answer to this is: Practise - try out different things to see what gives you the result you want. A good practise option is a charcoal grill with a lid and a smoke box, try out some different fire types (wood types, charcoal types) and see what works for you.

Having said that, there are a wide range of ways you can cook food on a fire, either suspended over the flames, over the coals, on the coals, buried in the coals. Smoking is separate because there are a couple of different ways to do it - cold or hot, and they require different things.

Steak is slightly unusual to smoke, it's more of a grilling meat generally, as it doesn't contain a lot of the collagens and things that make smoked meats so tasty, but require a lot of tenderizing. For hot smoking you need a container that will hold both the meat and your source of smoke - this can be a foil packet with your soaked wood chips inside and some holes punched in it and placed into a bigger box, or it can be a box with the wood chips at one end and meat at the other, a bit like a covered/closed grill. Temperature control for a long, slow smoke is difficult over just a plain fire, but not impossible. Generally the smoking portion of a cook is fairly short - 30 min to 1 h is usually enough, the rest is all about tenderizing the meat. Cold smoking needs a separate box with a chimney to the fire that collects the smoke and wafts it around the food. You would only generally use this for preserved meats such as jerky. For both of these you do not want a pine tree type wood, these result in resinous flavours that are quite unpleasant (generally, cedar can be nice though). I recommend something like apple or hickory to start with. Cherry and other fruit trees (not citrus though) are nice too.

If you are "grilling" you are suspending the meat over the fire in some fashion. Usually this is done over the coals, not the flames. Flames will scorch your meat and result in a smoky flavour, but generally not a nice smoked flavour unless the wood is a smoking type wood such as fruit tree or nut tree. The coals provide a more even radiant heat than flames and give you greater control over the cooking. Spreading the coals out and packing them together can give you good control over the heat with a bit of practice. I usually create a gradient of heat by having coals packed at one end and spreading them out across the cooking area. It is generally advised to have one area of the grilling plate which is away from the fire so that you can move the meat away from the coals in the event of fat dripping and burning - tastes horrible.

A rule of thumb is that if you can hold your hand at the height of where you are going to cook for about 10 s you are ready to grill most things. For this you need to have a hot grill. Place your grill over the coals and allow to heat up for about 10-20 min. Season and oil the meat, then place on the grill and cook to your taste (in my opinion your meat picture looks almost perfect). If the fat drips and flames up, move the meat away from the flames until they die down.

Suspending over the flames is usually only used for boiling water, unless you have a solid hot-plate like surface, in which case it can be used to cook pretty much anything you could grill.

On the coals is possible - you can use this to cook things off initially if you are making something like a stew, which will then be buried in the warm coals and left for an extended period, but heat control is difficult. I don't recommend tis for grilling as it is generally too hot unless the fire has died down a long way.

Buried in the coals is only used for long-slow dishes and breads etc and is equivalent to baking in an oven - you might be able to finish off cooking a smoked dish in this manner to give it time to break down into the tender meats associated with long-slow BBQ. This requires a bit of experimentation to get right too - too much heat will burn, too little and it won't cook. You can control the heat by moving coals on and off the lid of the pot you are cooking in. Thick walled pots with a tight fitting lid, such as Dutch-ovens are the best for this sort of cooking.

One way that is some what popular is what is referred to as dirty steaks or caveman steaks. This is usually done with a thicker cut steak, 1.5" - 2" thick. Lump charcoal works best as it has less additive than briquettes. Once your lump charcoal is mostly grey you lay the steaks directly on the coals.

What's great about this method is all you need lump charcoal and a pair of tongs or other metal flipping instrument.

The first thing everyone asks about cooking meat directly on the coals is, “What about all the ash?” And the honest answer is, “It’s really not a problem.” Before you throw your steaks on the fire—literally—fan off any excess ash from the surface of the coals with a newspaper, palm leaf, or any piece of cardboard you have lying around.

When you put the wet, oxygen-impermeable steak on the coals, the part that is touching the meat gets, in essence, extinguished, and can’t reignite. It produces no ash during the cooking. All the heat in the coals will be generated within the coal itself, not on the exterior.

That being said, many people like to keep a natural-bristle pastry brush on hand to brush any ash off that may find its way to the meat. However, Alton Brown says he doesn’t brush it off, that the little extra char flavor is welcome to him. I agree.

...when the exterior of your steak is sitting in a bed of 1200°F (649°C) coals, there is a lot of thermal energy being pumped into that exterior. The internal temperature gradients can be steep in steak cooked this way, so you’ll need to plan for a lot more carryover than you would with a steak cooked in an oven or on a grill. Plan for up to 15°F (8°C) of carryover at the thermal center, rather than the standard 5°F (3°C). This means for medium rare, you’ll want to pull your steak at a temperature as low as 115°F (46°C) to finish at 130°F (54°C )—or pull at 120°F (49°C) to finish at 135°F (57°C) for medium doneness. And pay attention. This cooking method is fast. It will only take 3-5 minutes per side on a thick steak 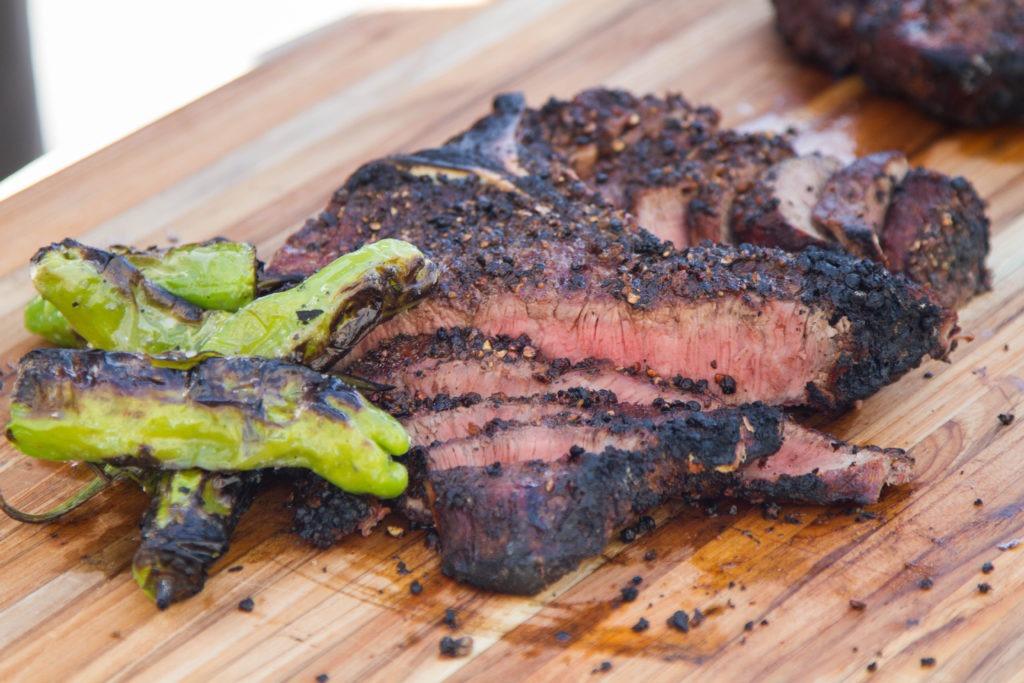 Not the answer you're looking for? Browse other questions tagged cooking camp-fire-cooking or ask your own question.

28
What's the difference between white gas, propane, kerosene, and gasoline?
15
How does the Esbit stove perform in cold & wind?
10
What is the most suitable cooking equipment to use for a long duration in central asia countries?
9
Recipe for baking bread/cake on the trail
17
Where is the optimal place to do dishes in the backcountry?
14
Is campfire smoke safe for inhalation and cooking?
8
Is a camping grill an indispensable cooking utensil in the wild?
16
What are the Pros and Cons of No-Cook Backpacking?
5
Are there any techniques to cooking food when camping in the wild by harnessing the energy of the sun?