What kind of personal flotation devices should surfers use? Or does the surfboard provide that function?

I read this tragic story today, "Several Surfers Are Found Dead in the Netherlands" which raised some questions about surfing and personal flotation devices (PFDs).

Some relevant quotes from the article:

Five surfers drowned off the coast of the Dutch beach resort of Scheveningen after they were caught in strong winds and foamy waters...

...the thick foam made it especially difficult for those who had fallen from their boards to return to shore.

...three [of the victims] are believed to be seasoned surfers who were professional trainers in open water swimming...

I am not extremely knowledgeable in surfing. I had the (perhaps incorrect) impression that the surfboard was itself the main PFD that a surfer would have, and that normally no other life-jacket would be worn. Partly I had this idea because I thought the surfer would be tethered to the board and I imagined that in cases of rough water or falls the tether would essentially keep your PFD within reach.

The article however makes it seem like some victims might have gotten detached from their boards, or perhaps I misunderstand how that works.

Is a surfboard considered a lifesaving device? Do surfers normally wear or carry some other type of PFD, or is that recommended?

Inferring from the article it seems like the conditions may have been extremely unusual and difficult - maybe unpredictably. It also says nothing about whether PFDs were used, or failed, or anything about that at all. Especially it does not suggest (and nor do I) that any of the victims were at fault. But nonetheless such a tragedy might at least be an opportunity to learn.

Generally, the board is your flotation device. Because you need to be able to dive, any additional flotation is likely to impede your ability to surf well.

And you are absolutely right, that the tether means you usually have that flotation available to you. It does have some problems in certain scenarios, though, and the most common one we come up against in Europe (as we don't have coral reefs which can be a snag risk) is surfing in offshore winds.

Offshore winds can make the wave face steeper and higher, so this can be fun, but a board acts a little like a sail and in high winds can make it incredibly difficult to swim back to shore.

Another challenge can be losing a board through a snapped or disconnected tether.

In this specific case, however, it sounds like the foam caused either breathing, swimming or navigation problems - none of which would be a flotation issue as such.

In that specific instance the victims were most likely not killed by water filling their lungs, but the dense foam. I don't think there is any current flotation device what would have saved them; as they needed to get above the foam itself. An alternative source of air (scuba tank or re-breathing device) or a very long snorkel, was called for. If it were indeed physically possible to save themselves, a navigation aid, anything which helped find an exit from the foam, could have done the trick.

Generally, the surfboard does very significantly ease issues related to buoyancy (air, fatigue, exposure). The thing with surfing is buoyancy is wholly undesirable in broken surf (we want to go under it), so there is a delicate too-much/too-little juggling act going on there; every surfer has their own preference. To illustrate better, take a look at the extreme...

"Big wave" surfers, which I'll define as waves too big to 'paddle in' to, often wear (commercially available) Inflatable Vests; a vest containing a CO2 capsule and airtight pockets which are deflated. When they get into serious trouble underwater they can release the CO2 into the vest pockets and, hopefully, pop to the surface like a cork.

But, bobbing around on the surface like a cork in a maelstrom of surf is also a potentially lethal, altogether different, problem. Which is why they don't wear boating type buoyancy vests or have an always-inflated vest.

To solve this problem, a feature of such vests, enable the wearer to immediately deflate the vest. For example, grab a breath and deflate before the next wave hits. The most recent models attach multiple CO2 canisters so the vest can be inflated/deflated a limited number of times. Hopefully, the wearer will be pushed out of the "impact zone", or their jet-ski buddy will pick them up before (or after) unconsciousness wins.

In normal conditions a large proportion of the air we breathe out has lots of oxygen still in it. So there has also been some experimentation with "rebreathers" which recycle the air in your lungs, mostly to alleviate the reflex to "breathe" where there is only water to suck in. They haven't really taken off. I guess because most guys in this category are sufficiently well-trained to be able to suppress the reflex and panic that would overwhelm mere mortals.

I've never seen any device specifically suited to navigating this kind of thing. I can say from personal experience that, when you are deep enough for it to get dark, the leg-rope to the board, which is above you, can be a lifesaver for indicating the direction to go. I have 'climbed' the leg rope hand-over-hand on occasions. Trying to blow bubbles and follow them is a fools errand.

This is not a practical solution, but lifejackets come in different levels, from simple flotation aids up to offshore versions. The latter have a lot of buoyancy and often come with a spray hood that might have helped in the situation. Due to the buoyancy they lift people higher out of the water, turn an unconscious person on the back, an keep them from inhaling water. These lifejackets are too bulky to be worn for sports, they are mostly used in the maritime industry. 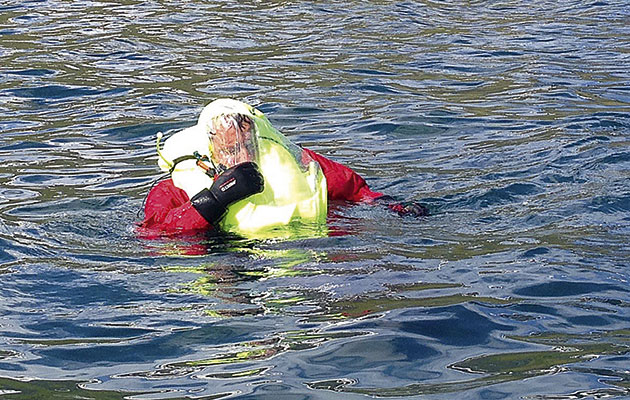 the board is attached via a leash, which is usually tightly wrapped around the ankle. the board can also save you in shallow waters when waves push you against rocks.

point being it is essentially a dangerous sport for anyone, which is what makes part of the thrill of it

Not the answer you're looking for? Browse other questions tagged safety water-sports or ask your own question.

23
Reacting to tornado warnings while camping with no buildings nearby
12
Relative risks of various outdoor activities?
6
How sophisticated a dust mask can one hope to improvise?