I shaped a 9"2 polyester longboard from scratch 14 years ago. I was in a hurry and did not sand the bottom deck. I used it on small surf for many years with only minor problems that I repaired with ding.

Recently I decided to finish the job and gave it to a shaper to make it more hydrodynamic. The shaper said that he blew the air bubbles, sanded excess resin, and gave it a new "resin bath". I used it a few times and indeed it had better performance.

Last week, on small surf of 1m and normal waves in the Atlantic, I felt a protuberance in the board and came out of the water. I was surprised to see the bottom deck bent with a large part of the cover ripped and the stringer bent. The top deck is intact. The board stands in one piece and I was unable to easily bend the board.

Here is a view of bottom deck of surfboard: 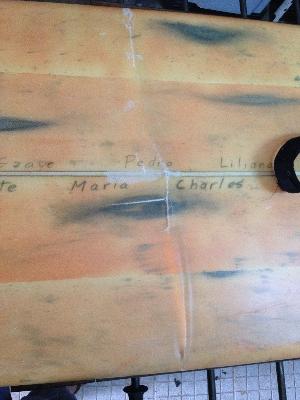 Here is a view of ripped cover and bent stringer: 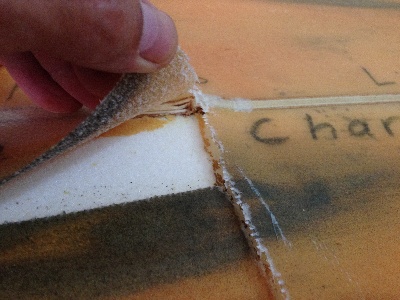 Here is a view of the right rail: 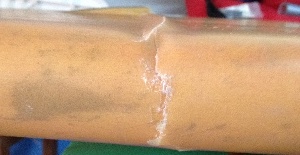 Here is a view of the left rail: 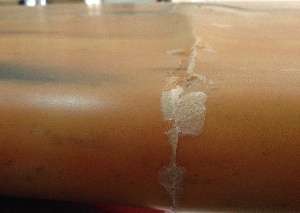 A few months earlier, another problem had appeared with a broken surface with no clear cause, which I covered with a sticker: 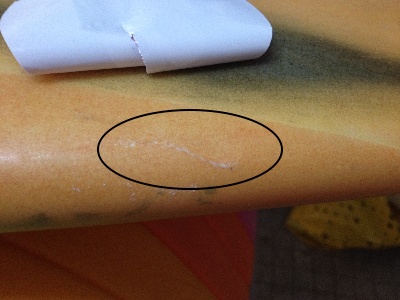 The shaper said that, because I had used too much resin, the fiber had surfaced and the sanding had removed part of the fiber, making the board weaker.

Since I had used the board for 13 years without a problem and now it has two problems, I suspect that the shaper made the board permanently weaker. Or it could be simply bad luck, or that a longboard this big has a pronounced lever effect.

Is the board worth repairing? If not, I now prefer availability to performance, so what type of board would avoid such problems in the future?

The disclaimer: I'm not a surfer but I've spent a lot of time working with composite kayaks, and I've done some rapid research into surfboard construction.

The polyester foam has minimal strutural use, it's primary function is to be a mould around which to wrap the fibreglass though it does have some purpose in preventing the shell from collapsing.

The stringer's purpose is almost entirely to stop the shell from collapsing as the foam is too soft and flexible to do it alone. It adds some stiffness and you'll see a change in the flexibility of the board if you make it thicker or use two placed differently but its strength is not significant under load. Basically if the shell fails under stress, it's almost certain that the stringer fails too. (Kayak shells are stronger and deeper, we use foam blocks for much the same task, though some people put composite struts in.)

The gelcoat (resin bath) is a surface finish, it affects water flow and protects the glass cloth underneath but has no structural purpose.

The strength of your board is effectively down to the quality and strength of the fibreglass shell. The top surface is compressed, the underside is in tension, the foam and stringer prevent the two from meeting in the middle and between them all generate the structure. The cracking on the edge implies that there was already flex in your board greater than the elastic flexibility of the materials used, meaning the normal load was significant to the structural strength. If, as mentioned by the shaper, the sanding damaged the threads under the board, that will significantly compromise the structure.

However the cracking on the edge makes me suspect you weren't that far from failure anyway. The failure itself looks to be top surface compressive failure, not bottom surface tensile failure. If only the bottom surface was sanded this was probably not the cause of the failure.

I have had boards that develop a crack like that, right through the foam core. I still use a board with a similar stress crack and it is stable and rides well. However, with the stringer broken like that it is just a matter of time until your board flexes too much and becomes unusable.

Perhaps, if he truly sanded through all the glass and did not layer some additional glass on when he applied more resin. Does it really matter though, it's basically broken now...

Is the board worth repairing?

It depends on : how attached you are to the board and how easy it would be for you to get a new (or used) board to replace it. You could likely slap more glass-reinforced resin on there to strengthen it and get some more ride time before it breaks in half (or maybe not, one unfortunate wave could mean the end immediately).

what type of board would avoid such problems in the future?

There are no boards that cannot be damaged or broken, but epoxy boards are stronger, lighter, and less easy to ding (they are also very expensive). You say that you originally shaped and glassed the board, and a professional told you that it was not done correctly from the outset. Because of this, I would venture to propose that a professionally manufactured board might be a way to "avoid such problems in the future".

Not the answer you're looking for? Browse other questions tagged repairs surfing or ask your own question.

9
Putting electronics inside a surfboard?
4
Nose-diving when catching a wave on a longboard
2
How to repair a surfboard leash?