Are there any toxic berries that can be easily confused with the Serviceberry (saskatoon berry)?

I'm pretty confident I have a serviceberry (saskatoon berry) in my front yard. It looks like all the pictures I've seen, I live in its habitat, and it tastes as described. Before I eat too many, I want to be absolutely certain. Really the only thing left to ease my mind is to eliminate poisonous berries that might be confused with the serviceberry.1

Here's some pictures of it, just for fun. 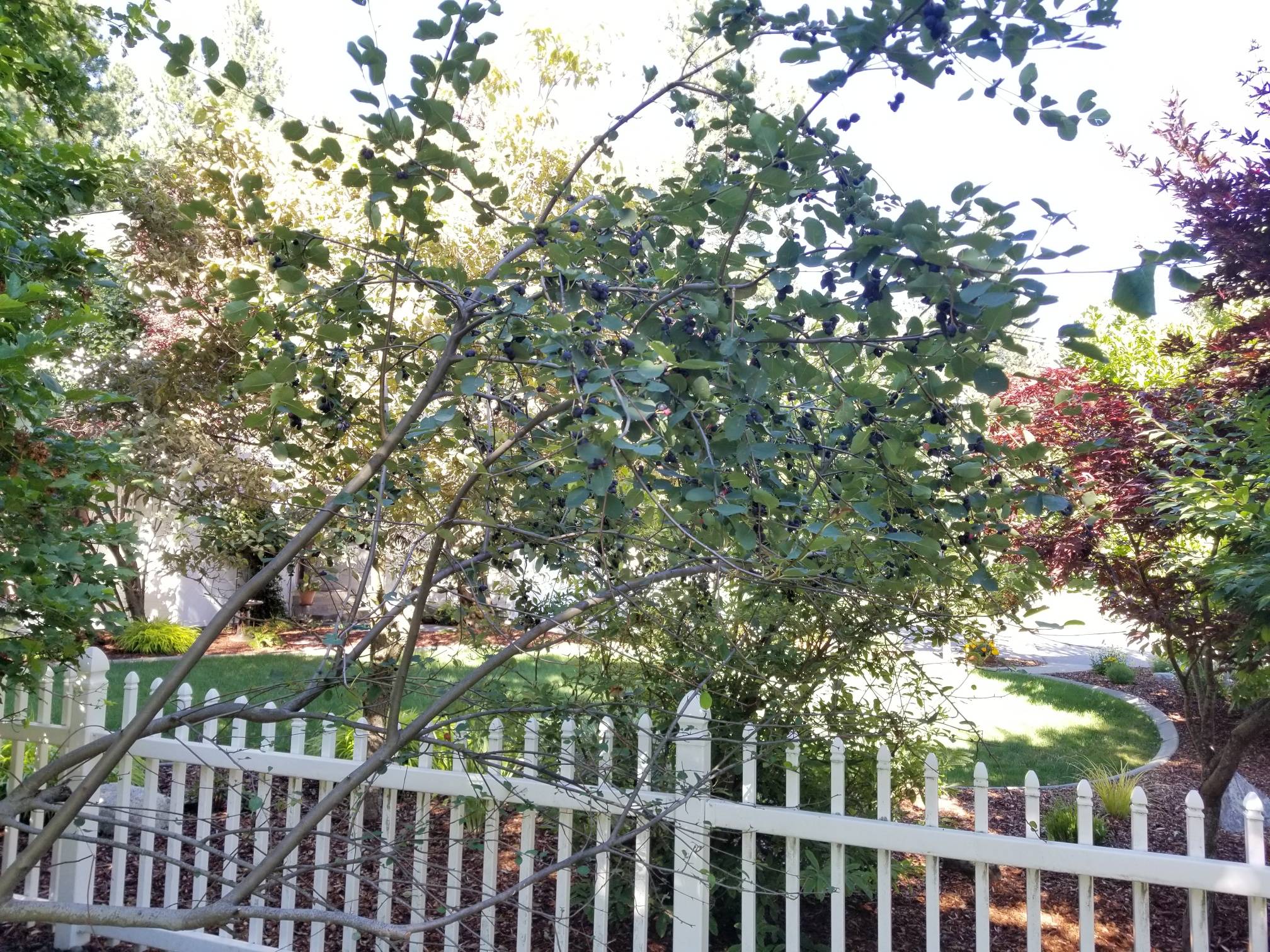 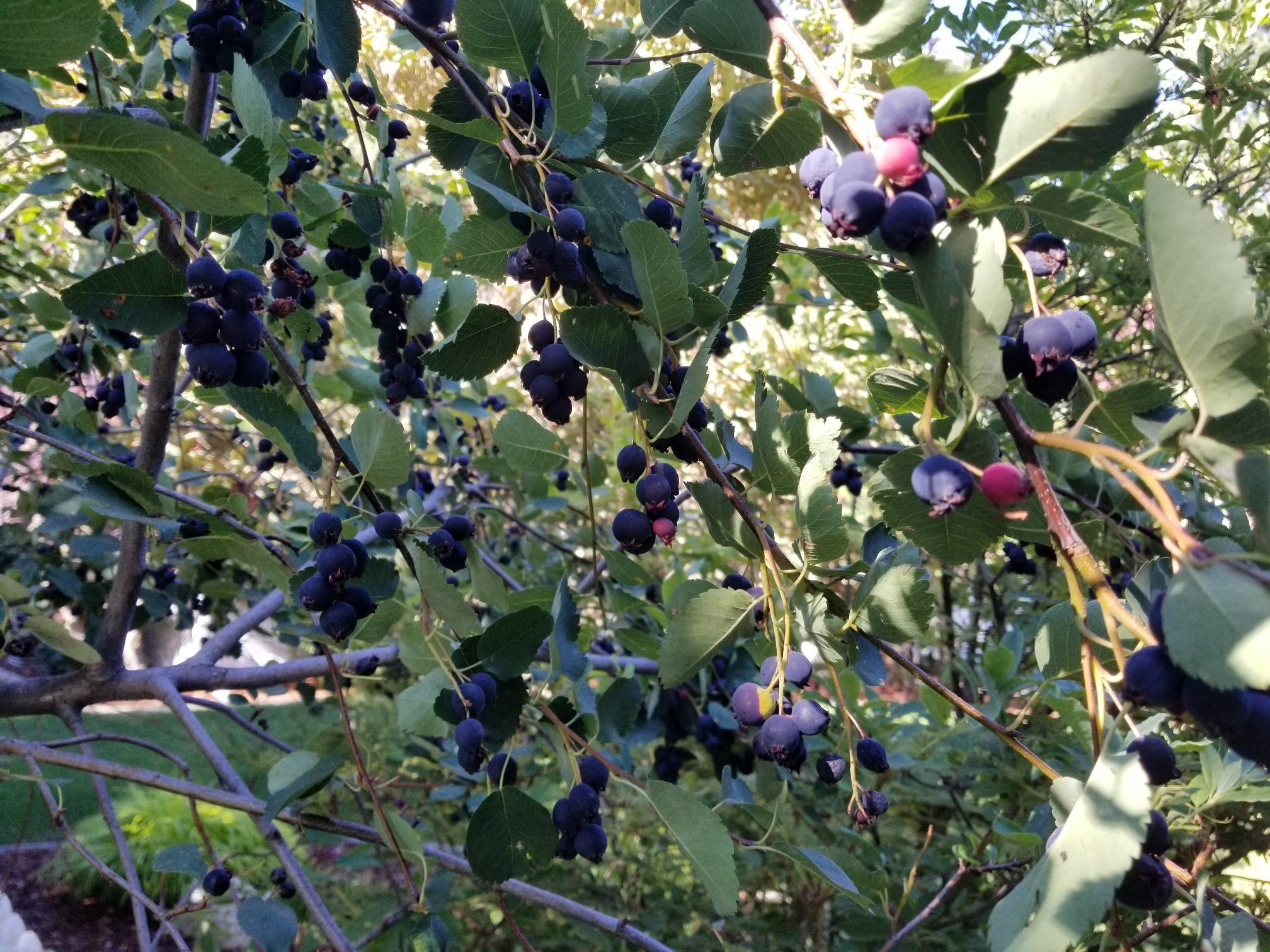 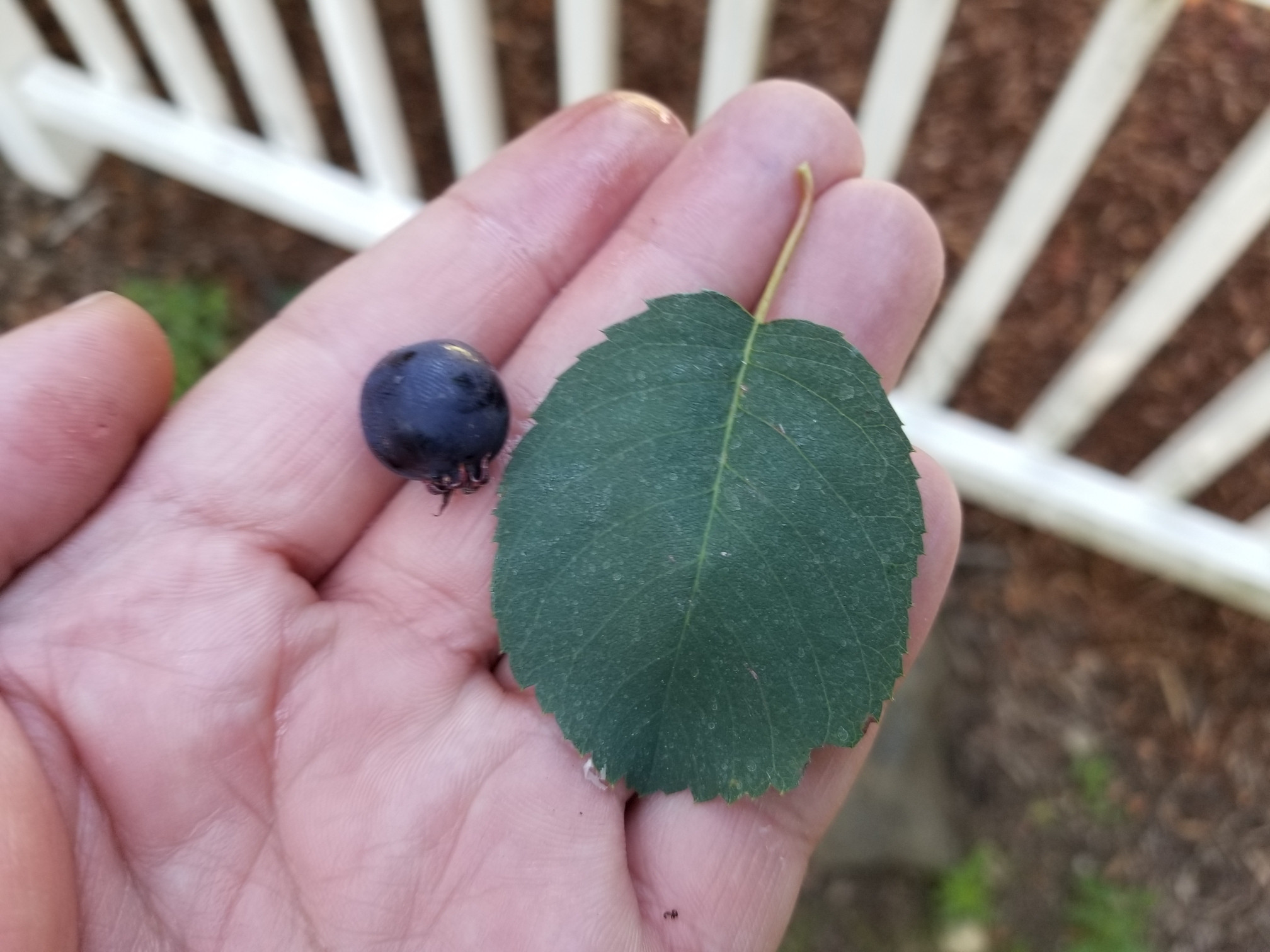 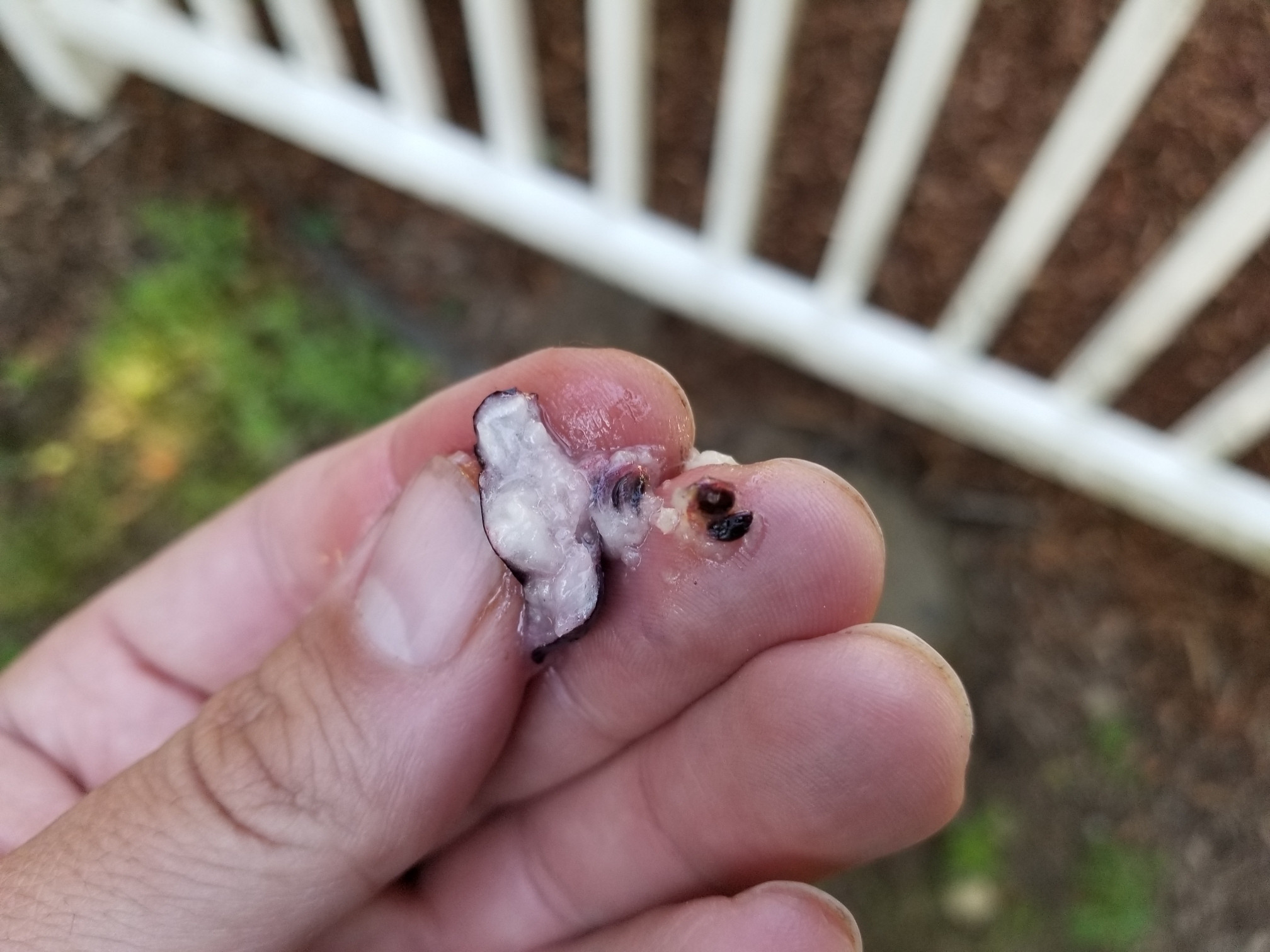 1: Actually, if what I have is edible, I am a bit concerned that bugs and birds don't care for it, apparently, but animals not eating it doesn't mean it's unsafe.

Regarding your plant, yes, it's a serviceberry. The dark blue berries are perfectly ripe, and you should harvest them immediately if you want to eat them. The pink ones aren't quite ripe yet. The berries on a single serviceberry bush tend to ripen almost all at once, rather than a few at time, so the birds don't always notice right away. Once they do, they will descend en mass and clean the bush completely, leaving you sad and berry-less. For several years now I have missed picking the serviceberries in the landscaping around my building, by waiting for it to get just a bit more ripe.

The question of "which plants can be confused with this plant" always comes down to which identifying characteristics you rely on most heavily. The way to safely identify an edible plant is to use multiple ID characteristics.

If you're just looking for plants with dark blue to black berries, then you could confuse it with the poisonous pokeweed (Phytolacca americana, also called pokeberry, as mentioned by bob1) and some nightshades. Also every vine that people sometimes confuse with grapes, such as moonseed (Menispermum canadense), Virginia creeper (Parthenocissus quinquifolia), vining nightshades, etc.

If you're looking at landscaping plants, you should be aware that guides to "plants of North America" tend to focus on wild-growing plants. A completely different set of plants are used in landscaping, and the ones that don't grow in the the wild are usually ignored by such guidebooks.

In landscaping, you could confuse serviceberries with ...

Here's a very similar look-alike that I haven't seen mentioned in any edible plant book or reference. Glossy buckthorn (Rhamnus frangula or Frangula alnus). Like serviceberry, buckthorn can grow either as a multi-stemmed shrub or as a small tree. It has light-gray bark of a similar shade. It grows in a wide range of habitats, from wet to try, full shade to sun. It's an invasive species, so it tends to insert itself uninvited into landscaping and natural areas. And it has black berries, of a similar size and shape to serviceberries. If you eat buckthorn berries, they have a cathartic effect (in the medical sense). In layperson's terms, they give you the runs, the trots, the "sprint-for-the-bathrooms". It could be a day-ruiner, but it's unlikely to kill you. (As North Carolina Plant Toolbox puts it, "This plant has low severity poison characteristics.") 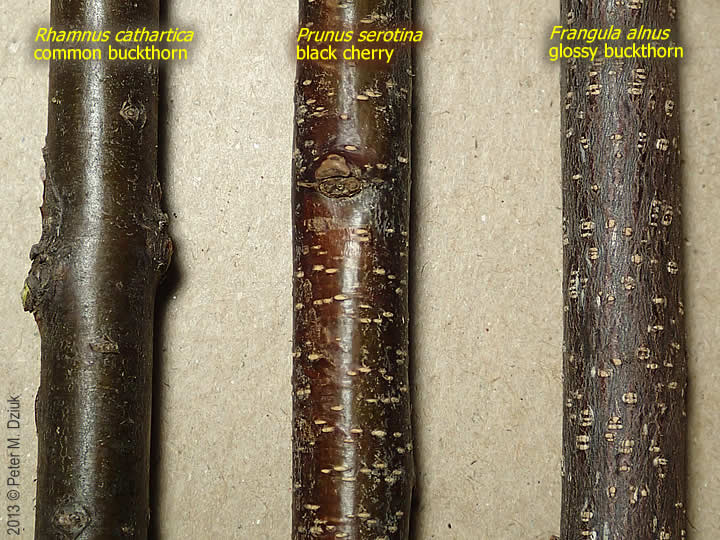 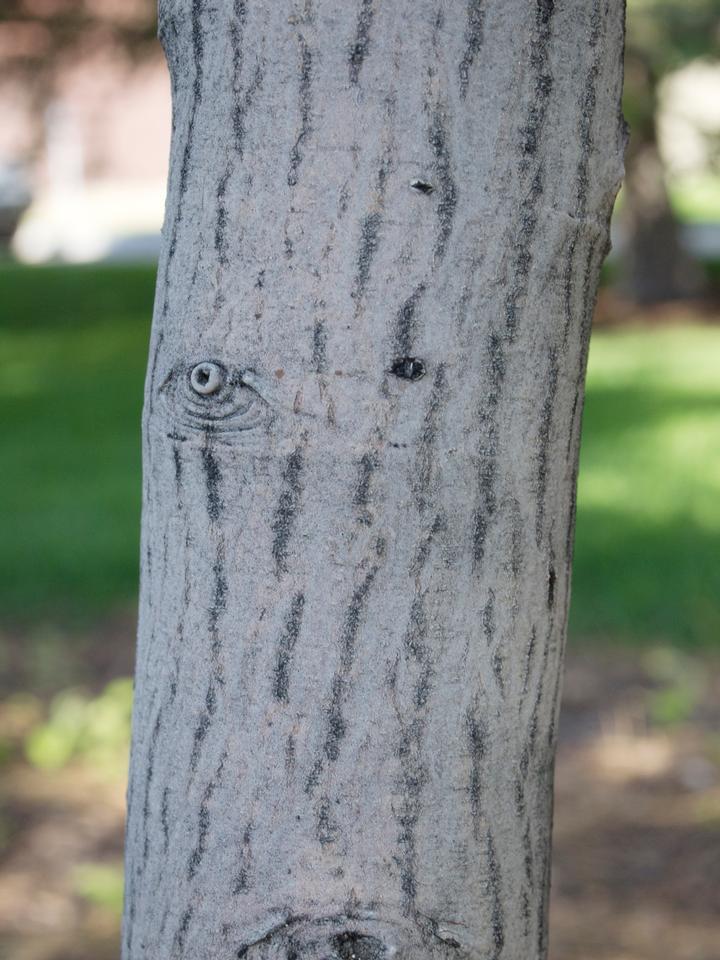 Color of unripe and ripe berries 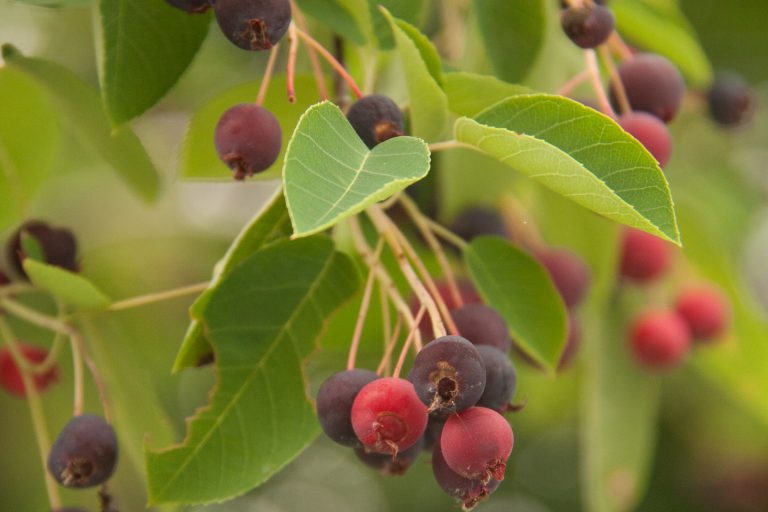 Yesterday we just discovered we have a large Utah Serviceberry in our backyard. We used the app Plant Net to identify it (looks just like yours, the berries resemble blueberries but taste a bit more like rose hips, same round leaf with serrated edges). Check out the app, it has been a game changer for us! Anyway, we proceeded to eat handfuls of berries without ill effects. And we did see one (handsome orange headed) bird eating them, but not the flock you would expect in the dry, high desert! Hope this helps!

I had a quick skim through the plants of North America that are dangerous to livestock, but have been unable to find any freely available guides that list the ones dangerous to humans.

In any event, none of the species in the livestock guide resemble saskatoon berries (Amelanchier alnifolia).

The closest toxic species I could see is the pokeberry (Phytolacca americana), which has very distinctive pink stems leading to the fruit and the berries grow in a cluster from a main stalk, very unlike the saskatoon berry. The pokeberry also has much softer stems and leaves that are very different to those of the saskatoon. I doubt that you would easily get the two confused.

Another similar toxic berry are members of the nightshade family (Solanaceae), which are a very diverse group of plants with prolific berries that are usually dark purple or red. However, in this case none of the species bear any close resemblance to the saskatoon, nor do the berries resemble those of the saskatoon, being (usually) much smaller and shiny, as well as lacking the apical crown that distinguishes the blueberry and saskatoon from most other berries.

16
Are there any specific guidelines for edible plants in North America?
8
Are there any inedible seaweeds on the UK coastline?
6
Are there plants (for instance berries) which lead to dehydration if eaten?
12
What are these strange seeds that looks like a mini porcupine which you can find all over Germany?
2
What are these clusters of tiny dark blue berries found in the Southern Canadian Rockies?
17
Are there any reliable plants to use for navigation?