What caused these ~5 cm holes in my front yard?

I found these holes in my yard yesterday, in an area roughly two meters wide. This is in the southern part of the United States. No other yards in the area seem to have them, and they appeared overnight. The holes stop after about 15 cm in depth, with the largest one being roughly 10 cm across and 25 cm deep, so I don't think it's moles since they tend to make tunnels. There seems to be a significant amount of dirt upheaval around the holes, as well. In the last image, the floor of the hole almost resembles a deer track, but I don't know if deer make holes such as these. 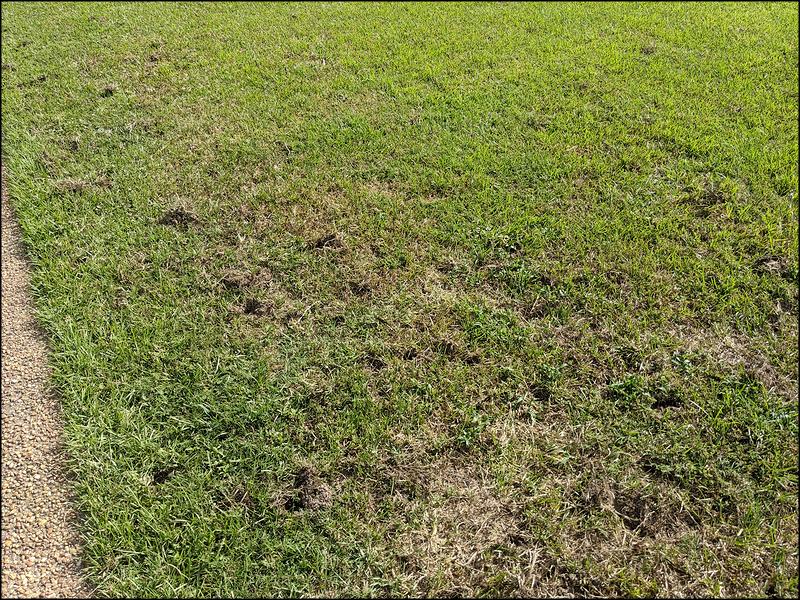 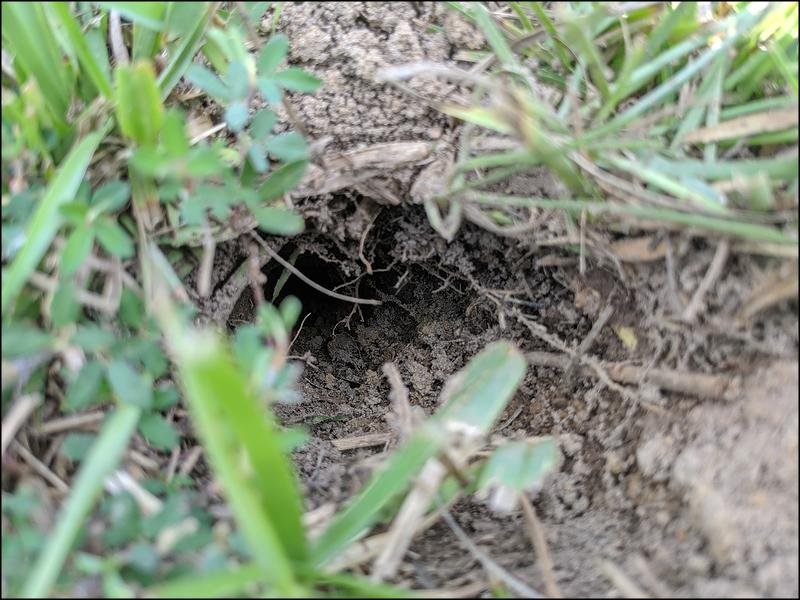 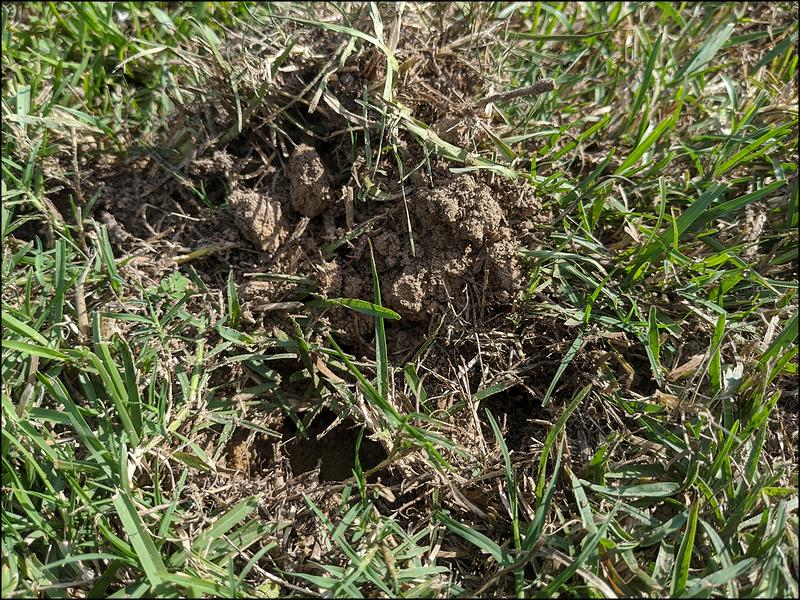 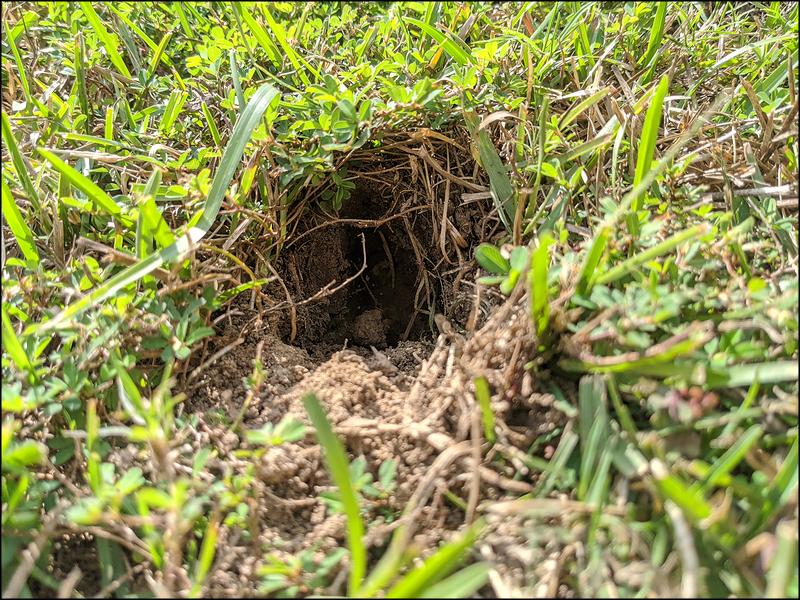 A skunk. Skunks work over night, digging little, round holes to get to grubs, and they work systematically digging up all the grubs in one area before moving on. Sometimes they even come back and do another section of the yard the next day.

This site has a picture of skunk holes that's very similar to yours (I don't have a good picture of my own).

They are relatively benign, even though they do kind of toss the dirt around they usually don't dig any more than absolutely necessary to get tasty grubs out.

What caused these ~5 cm holes in my front yard?

My guess is that it due to voles.

Voles are small rodents that are relatives of lemmings and hamsters, but with a stouter body; a shorter, hairy tail; a slightly rounder head; smaller ears and eyes; and differently formed molars (high-crowned with angular cusps instead of low-crowned with rounded cusps). They are sometimes known as meadow mice or field mice in North America and Australia. - Voles (Wikipedia)

It is not a mole!

First off, voles are not moles! People confuse the two animals because they both tunnel through your yard. You might not have seen either critter since they’re usually underground, but they look very different. Voles (Myodes) are small, stocky rodents similar to field mice. In fact, a vole might look like a mouse at first glance. In contrast, moles are NOT rodents. Moles are all nose and mouth. And they have big feet used in digging! See our Mole page.

Voles have small rounded ears that are often hidden by their fur, small eyes, and short tails. Their fur is generally thick and light brown to gray. Two common species of voles in North America are the prairie vole and the meadow vole. Meadow voles are more widely distributed, but prairie voles are more common in prairie areas. They are very similar, and methods for controlling them are mostly the same.

Voles, similar to other rodents, have a mainly vegetarian diet. Voles mainly eat stems and blades of lawn grass—so it’s usually vole tunnels that you’ll see near the surface of the yard. Moles have a mainly carnivorous diet. (Moles are beneficial in many ways. They help plow the soil and eat grubs and insects!)

It’s helpful to know this difference not only because it will help you identify the damage but also because a vole bait would use peanut butter whereas moles would be more interested in an insect or earthworm.

If it helps, remember that their frenzied activity does subside. Vole populations cycle, and about every 3 to 5 years there will be a population boom. Mild winters with good snowfall can help to increase vole populations. - Voles (The Old Farmer’s Almanac)

According to the National Pest Management Association, the vole is compact and stocky with fur that is usually brown or grey and is typically between 4 and 8 inches long. This furry little pest has a short tail, small eyes and tiny ears that are partially hidden by its fur. The underfur of the vole is typically quite thick and covered with longer guard hairs. The 23 different species of voles can be found across all regions. The animals do not hibernate and are active year-round, day and night.

While the vole doesn't pose any serious threat to humans, it can cause extensive damage to your fields, crops, gardens and plantings. According to The Old Farmer's Almanac, voles prefer fields and lawns that have lots of vegetation and coverage. Mulch and weeds provide them with both food and hiding spots. When it comes to your crops, backyard and garden, voles are capable of causing extensive damage. These pests will eat away at bulbs and root vegetables, as well as shrubs and trees. They also pose a serious threat to golf courses, lawns and ground covers. Their complex burrow systems, which can house several adults and young voles, are also known to damage crops from the bottom up.

The fact that it happened in a concentrated area in a single night makes me strongly suspect either raccoons, opossums, or maybe armadillos. Chances are they are digging for insects (grubs). I am from the northern US, so not much experience with armadillos, but I know for sure that those other 2 critters tend to get pretty fanatical and can make a big mess in a very short amount of time.

The other 2 answers are good guesses, but:

There's a good chance that they will not return, but if they do you could try rigging up a sprinkler with a solenoid valve connected to a motion detector, so they get hosed down if they try again. Long term, you might need to apply a pesticide to remove the food source. Look for a product labeled for grubs (Sevin might be a good bet).

Not the answer you're looking for? Browse other questions tagged animal-identification or ask your own question.

7
What nocturnal animal in Massachusetts skitters around and grunts loudly?
6
What does a dark colored fur mean regarding a jaguar
11
Are these tracks in the mud tortoise/turtle tracks?
12
What are these round, spiny, puffy, green things from the ocean in Northeast United States?
6
Are these tracks on the sand in Portugal dormouse tracks?
4
What aquatic animal laid these eggs?
3
What is this lizard-like thing?
3
What animal was killed here?
6
Are these animal droppings?