Top rope installation on an anchor

Let's suppose we have two bolts which are connected with a chain and a ring for rappelling at the top of a climbing route and we would like to install a top rope setup.

I hear on a monthly basis that two quickdraws facing opposite sides are unsafe and I should use instead one locking carabiner.

Ps. For reasons of wear I would like not to use the ring directly and use instead quickdraws or a locking carabiner.

It is a good practice to backup a tope rope system, especially considering that

That said, the recommendation should not be to use a single carabiner, even if it is locking. Screw gates my come undone or people might simply forget to close them. Auto-locking carabiners such as tri-lock or ball-lock my be affected by dirty that prevents the correct closing and someone who climbs above the anchor might accidentially unclip. The recommendation by the German alpine club (DAV) to use two quickdraws/carabiners:

However, there is nothing wrong with combining a locking carabiner and a quickdraw as a backup.

One locking carabiner might avoid some failure modes which apply to two quickdraws, but, as others have noted, it sacrifices redundancy.

If you are concerned that two quickdraws might fail, you may make a couple "locking draws" specifically for anchors. Just attach small locking carabiners to a dogbone. That's what I have made for myself, mostly for peace of mind because I have never heard of any accidents caused by opposite and opposed quickdraws. Anyway, this seems like the best of two worlds: redundancy of two attachment points and safety of locking carabiners. 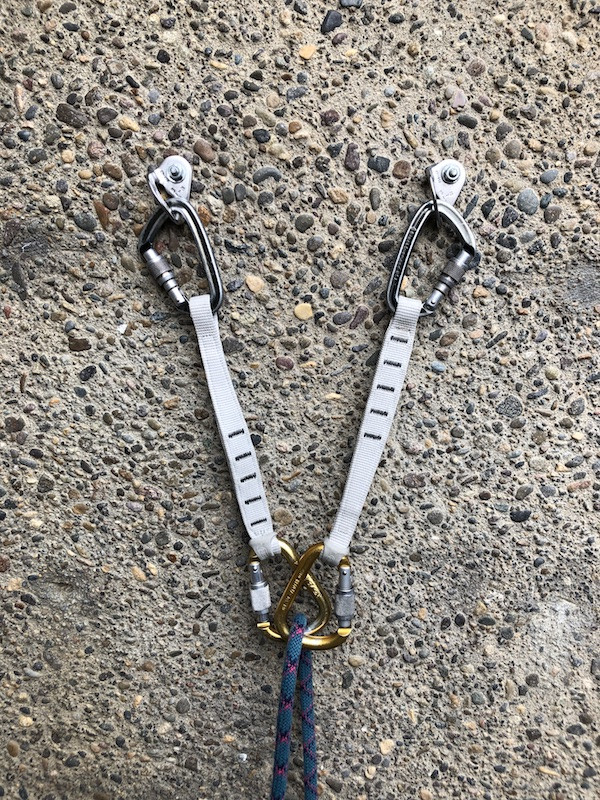 Image taken from this article

You can do a variety of techniques. There are trade-offs between speed and safety. The following is what I would do to make a very safe anchor that a bunch of people are going to climb on. It requires four carabiners, at least two of which should be locking, plus a cordelette or static rope.

Ignore the chains and the rap ring -- especially the rap ring, which can be worn and which you don't want as a single point of failure. Put a locking carabiner directly through the hanger on each bolt. (If you don't have four lockers, it's OK to use non-lockers here, since they're going to be redundant.) Using a static rope or a cordelette, put a loop of cord through both locking carabiners so that when you pull the two strands down in a V shape, it extends the desired distance. (E.g., if the bolts are above a lip, you want to extend far enough so that the climbing rope won't rub on the lip.) The V should be long enough so that it doesn't amplify the forces on the bolts. (If the angle between the strands is greater than about 90 degrees, you'll be amplifying the force a lot.)

If people are only climbing a single route from this anchor, so that there is only a single well-defined direction of pull, then tie the two strands into a big knot such as a double-strand figure-eight on a bight. Put two locking carabiners through this knot, opposite and opposed.

If people will be climbing multiple routes on this anchor, with different directions of pull, then tie two limiting knots in the anchor, and put one locking biner through each strand. This setup is called an equalette. It allows the anchor to self-equalize for different directions of pull, while limiting extension if one side fails. Some people I know here in Southern California who do a lot of sport climbing will just pre-tie an equalette and use it all day on a series of sport climbs that have similar two-bolt anchors.

Before climbing on the anchor, evaluate its safety the same way you would with any anchor, using a checklist such as SRENE.

A good book on this topic is Climbing Anchors, by Long and Gaines. The techniques I described above are shown in ch. 10, with lots of photos. These techniques are similar to, but not identical to, the ones taught in the AMGA single-pitch instructor course.

You can evaluate these setups using the SRENE acronym.

The two-quickdraw setup is solid and redundant, and if one side fails it's likely to have little or no extension. However, it's not equalized at all.

Re a single locking biner, it depends on how you are thinking of attaching it to the bolts. But in any case, if it's a single biner, it's not redundant. For example, if someone forgets to lock it or if the rope rubs on it and causes it to unscrew, you have a single point of failure. The risk is low, but I don't see the point of not using two lockers.

A general rule of thumb in climbing is that one locking biner is the moral equivalent of two non-locking carabiners, opposite and opposed. So that isn't the issue here, per se.

12
What is an equalette anchor?

11
Anchor without cordelette?
11
"Used" top rope when bouldering
11
Learning Anchors - How is single cordelette loop anchor redundant?
11
Is this anchor set up right?
9
Extending a two bolt anchor with one sling?
5
How to use a static rope as a tether at the anchor of a top rope climb?
8
When making an anchor with static rope around a boulder, what knot should I use
12
What to do when one point in a climbing anchor breaks?
3
Use of a personal anchor system to rappel (abseil) off a cliff with anchors by the edge and at foot level
2
Why is it considered good practice to not remain attached to just a Personal Anchor System?