I am trying to learn about basic ice fishing and literally every article I read and every YouTube video I have seen so far, seems to use the following concepts interchangeably, even though I know they are different:

So I ask: what is the difference between these three devices, and why/when do you use each?

Just a few basic tips about ice fishing up here in Canada.

The line going into the water does not have to be long because generally fish will swim just below the level of the ice, which in some cases can be quite thick!

INUIT ~ People of the Arctic

Large numbers of fish can sometimes be caught in this way, as they congregate beneath the ice
in readiness for their spring migration downstream.

Many more people, though, are involved in fishing with lines. The fish have little interest in feeding then but they are drawn to the hole by the agitation of lures. The fishermen wait and watch (carefully!) and …

When a fish appears below them they strike downwards (allowing for refraction!) with a fishing spear (or kokiwog) which grasps hold of the fish. The kokiwog has flexible arms made from the horns of a musk ox so the fish, once speared and retrieved, can easily be released. 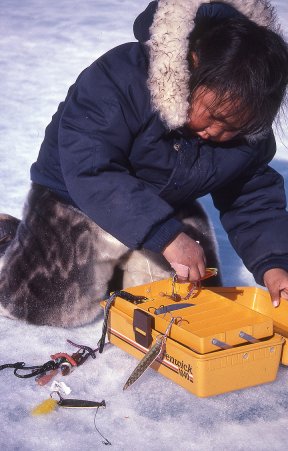 Nowadays the use of fishing spears is less necessary as colourful lures with barbed hooks attached can be purchased cheaply from the store. 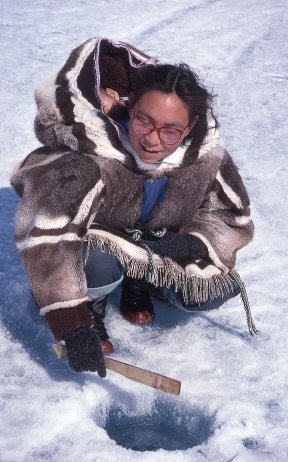 A stick with a hook and line attached is simply jigged up and down.

Ice fishing rods are very short in comparison to normal angling rods. There is no need to cast your line far out into the water. You more or less simply drop your line into the ice hole.

Use a fishing reel you feel comfortable with the style in ice fishing is not of great importance. But I would recommend a spinning reel.

A fishing reel is a cylindrical device attached to a fishing rod used in winding and stowing line. 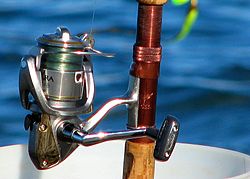 [Jigging is the practice of fishing with a jig, a type of fishing lure. A jig consists of a lead sinker with a hook molded into it and usually covered by a soft body to attract fish. Jigs are intended to create a jerky, vertical motion, as opposed to spinnerbaits which move through the water horizontally. The jig is very versatile and can be used in both salt and fresh water. Many species are attracted to the lure which has made it popular among anglers for years.

For successful jigging, the jigger needs to use a rod which is good for feeling a strike, and needs to stay in contact with the lure and get it to where the fish are. Most fish caught by jigs are on or near the bottom.

This last statement is not true when ice fishing as the scenario is in fact the opposite.

As for the gigs themselves the following may be helpful:

The head of a jig can consist of many different shapes and colors along with different features.2 The most common is the round head, but others include fish head shaped, coned-shaped, or any number of varieties. The three most popular jighead shapes in bass fishing are the flipping jighead, the football jighead, and the grass jighead. These heads come in many different weights usually ranging from 1/80 of an ounce to nearly a pound for large saltwater bottomfish. They can also be found in a wide array of colors and patterns. The hooks also vary. These variances can be on the hook type, color, angle of the hook or the material of the hook. Some jig heads even offer a weed guard.

There is a wide array of bodies for jigs. The most common is made out of rubber or silicone. These come in many shapes and can resemble a grub, frog, fish, paddle tail, lizard, or different insects. The colors of these can range from bright yellow to a transparent brown with silver and red flakes. Also, during summer months look at colors for the heat such as browns, or blue with black hair. Many others catch fish like smallmouth bass and largemouth bass. Bait such as minnows, leeches or night crawlers can also be used as jig bodies.

Other, more traditional types use dyed or natural whitetail deer tail hair on the outside. Called a bucktail jig, they are widely used in the northern and midwestern United States, where many are still hand tied by anglers.

Other types of materials are also used in constructing jig bodies, such as a Chenille wrap on the hook shaft, various feather hackle, hairs or other fur, marabou, Flashabou, and other materials. Construction is often similar to the process of Fly tying. Some jigs are constructed identically to their artificial fly counterparts, one example a "Wooly Bugger" fly but tied on a jig head.

Bodies can be either brightly colored or subdued. They are often designed to mimic local prey fish or large local insects. - Jigging

As for tip ups, the following explains the basics:

What is tip-up ice fishing and how does it work.

The basics of using a tip-up are easy enough for anglers of all skill levels to master. They are far from being a lazy way to fish. Using tip-ups requires attentiveness and plenty of exercise as you run from hole to hole.

Tip-up ice fishing is a method of fishing that allows anglers to set multiple baited lines below the ice. Strikes are detected without the need to be in the immediate area of the equipment. A trigger mechanism flips up a flag, indicating a fish has taken the bait. Fish are pulled up by hand through the hole in the ice.

That’s tip-up fishing in a nut shell. Keep reading if you’re ready to become an expert at all things tip-up. 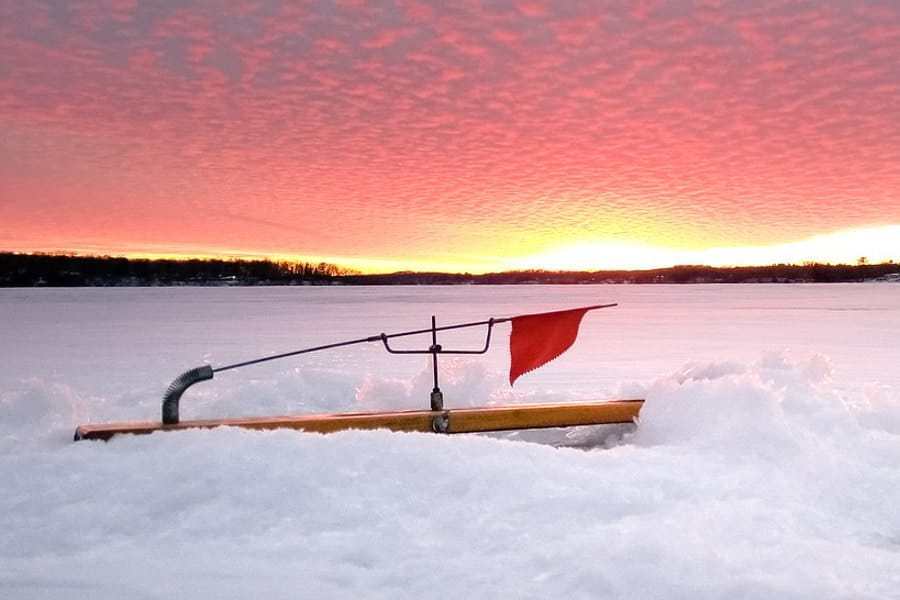 The following may be helpful also:

An ice rod and reel are the basic components you need for fishing (well, you could use a hand line...) This consists of a fishing rod and a reel usually with line and hooks and sinkers attached. An example picture of one set-up of a rod and reel combination can be found here. There are many rods and reels that will work in this situation, but you want something short (i.e. not a surf rod) and fairly stiff so that it doesn't have a lot of play. The short, stiff rod is an advantage because you don't want it interacting with the hole in the ice too much when winding in a fish - it could snap the rod or cut the line. Short also helps if you are in an ice-fishing hut.

A tip-up is a device to tell when you have a fish on the line - basically you run your line through a device that holds it in place and indicates by position of a flag or something similar that there is a fish on the line. This saves you from having to hold the line constantly to tell. A tip-up is the equivalent of a float or bobber used on open water. With ice-fishing you may not be able to see the water surface (you are fishing down a hole of indeterminate depth, but usually >10 cm (4 in)), so a float/bobber might not be visible.

A jig is a type of lure, specifically one that has a weight/sinker moulded into the lure and is used in a vertical position by jerking up and down (as opposed to hauled horizontally along the water like a spinner). The jerking up and down action is called jigging and is designed to cause the lure to mimic an injured fish - prime food for eating by your target fish.

A jig should not be confused with the term "rig" which would be the overall set-up including rod, reel, lure, sinker, line, tip-up and anything else directly involved in the fishing. A basic rig will be the rod, reel, line, hook, and sinker.

Not the answer you're looking for? Browse other questions tagged fishing ice fishing-rods or ask your own question.

5
European Made fishing rods
4
A fishing pole for lake and ocean fishing
13
Fishing Rods: One Piece or Two Piece
18
How do locals (short of drilling) determine that lake ice is safe for skating, ice fishing, snowmobiling, skiing?
7
What is an ice circle, and how does it form?
3
Where in USA can I buy high end telescopic surf rods for fishing?
3
Telescopic surf fishing rods - Are less segments better?
4
How and when to sharpen ice screws?