Figuring out from a map which direction is downstream for a river?

If you pull up a river on Google maps it's not clear what's downstream from what.

Is there a way to easily know which direction is downstream or upstream for a given river or stream or whatever? 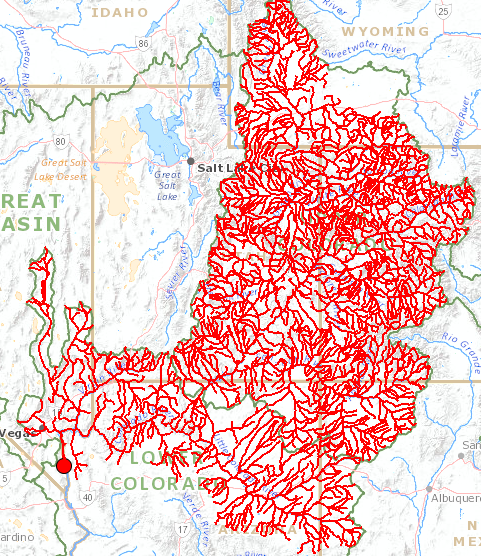 Aside from a map such as that one, there are some visual clues you can look for on a normal map.

Dams and Reservoirs - if there's a dam, there's usually a reservoir upstream of the dam. So if your map shows a dam and reservoir, you immediately know which way is upstream on that river. Even if the dams aren't marked on the map, sometimes you can tell where they are by the shape of the reservoir edge. In a graphic map, a dam creates an unnaturally straight line with a wide stretch water along one side of it and a narrow strip of water plus bare land on the other side. Of course in satellite view you can see the physical structure of the dam itself. 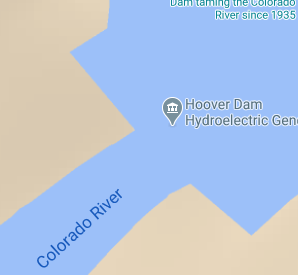 Unfortunately you may not be able to tell from the shape of the reservoir which end is the outlet and which end(s) is/are the inlet(s). For example, Lake Mead, the reservoir above the Hoover dam, looks like it has a dam on each of its three corners. You would have to zoom in on each corner to see if there's a dam there or not. 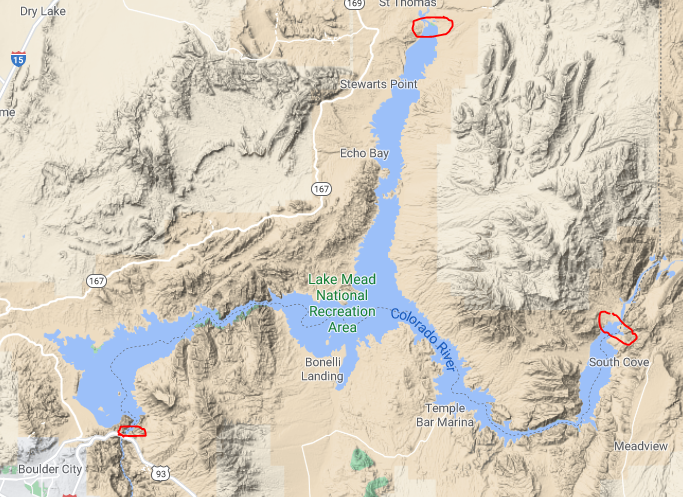 Confluences - a confluence is the point where two or more streams flow together. Streams usually flow together at an acute angle. If you draw the acute angle on the map, it makes an arrow that points downstream. This is not 100% reliable, but it's helpful nonetheless. 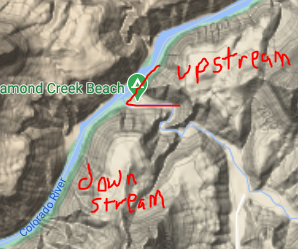 The "Rule of Vs" - on a contour map, contour lines that cross a river will bend into a V shape, with the V pointing upstream (the opposite of confluence angles). 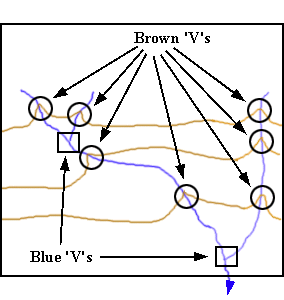 Find one end of the river - trace the river until it either flows into a lake or sea, or until it peters out. When it gets too narrow to see on the map, that's (approximately) where the headwaters are. In the case of major rivers like the Colorado, you have to trace the river for quite a long way.

Look up a topographic map ("topo"), such as the USGS maps, which are free online. These maps show elevations.

As a quick and dirty expedient, you can also just try zooming out and seeing which end of the river drains to the ocean, or which end is up high in mountains or hills. I can imagine that this might not always work, e.g., if the river flows underground in some places, or dies out, or has loops and branches that connect in complicated ways.

In addition mostly to @csk's answer, there are maps that give the direction of rivers, e.g. OpenTopomap

For most parts of the world, this information is redundant at the first glance since you can see the overall (larger) shape of the valleys in the map and follow the valley until it is clear whether you go upriver or downriver, but there are some interesting exceptions: 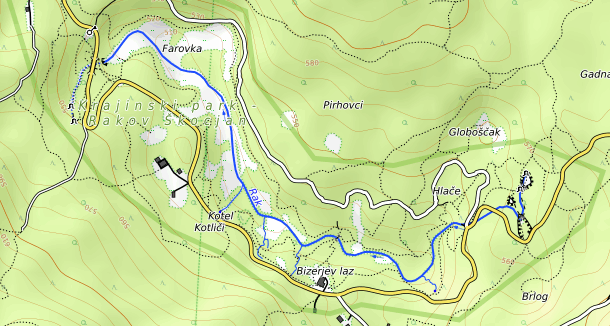 Yes, the side creeks point into the correct direction (but not very distinctly). But the curvature of the elevation lines are ambiguous (I guess the elevation model used to calculate elevation lines is not sufficiently detailed here): contour lines close to the caves suggestes that the river flows out of the caves at both ends. I've been there and can confirm that as the arrows say, it flows east to west, though. From one cave into the next (sinkhole).
In this particular rendering every elevation line is labelled somewhere, so one can also track down the information

The answer is often to not use Google maps, and this is no exception.

If you want an online source, Openstreetmap.org can help - the cycling layer shows contours so you can use the methods in another answer, but if you're at a PC and select "Edit" the default editor shows arrows pointing downstream. As cbeleites unhappy with SX says in another answer, there are better ways to see this data.

This information is available to apps that use OSM data, but the only such app I've got doesn't show the direction of flow (unnecessary on a bike computer, and I could always refer to contours)

As other answers have said, you need a map which shows contour lines. From seeing which end of the river is higher, you can work out which way it's flowing.

Google Maps does do this, but it's not very user friendly.

First, turn on "Terrain" from the "layers". This will show you a shaded map giving a rough clue to the shape of the landscape. This may be good enough, but it's not quite what you want.

Zoom in gradually. At some level of zoom, the map changes from just showing shading to also showing contour lines. Zoom in slowly, and the numbers showing height in metres will become visible. You can now work out your river direction as normal.

Zoom in a little too far though, and the contour lines are removed. Like I said, not very user friendly.

Not the answer you're looking for? Browse other questions tagged rivers or ask your own question.

8
Is there a website with current river water levels for Arizona/Utah?
5
Terminology and cues for reading river water when fly fishing
8
Long term autonomous winter expedition northern Quebec/Labrador: Advices/questions
3
Small Islands in Androscoggin river, Berlin NH
11
How do you protect yourself against crocodiles when you have no option but to camp on the banks of a croc-infested river?
4
How long does it take to sail up the Mississippi?