When I hang my water bag to heat water in the sun for family bathing, I do so by tying a weight to the end of the rope and throwing it over a tree limb. Then I lower the weight, tie the water bag to the rope, then pull the bag up.

This potentially scars the tree limb due to rope friction, even if you use a soft rope. I have been trying to figure out a way to do this so that I do not cause rope friction on the tree.

What I have tried is tossing the weight a 2nd time, then trying to create a pulley-like set-up so that the rope takes the friction. What happens is that I just end up strangling the tree limb.

Can someone suggest a knot that would work?

I should note that I need the bag over my head, so I have to select tree limbs taller than me.

Toss your first rope over the tree branch using the original method. Use the second rope to raise the bag, using the carabiner as a pulley.

To reduce friction, you can add a real pulley to the carabiner if you have one. Or, if you don't have a carabiner and don't mind extra work, you can use the rope as a pulley (but the friction might wear the rope out pretty quickly).

A disadvantage of this system is that it's complicated — it requires two ropes (or one sufficiently long rope). Also, you must anchor 3 ends, instead of just one.

Instead of using the branch as a pulley, lift the bag into position with one hand while pulling the slack out of the rope with the other. If the bag is too heavy to lift over your head with one hand, have a second person pull the rope while you lift the bag with both hands. This will greatly reduce the friction on the tree limb.

Using anatolyg's idea of the carabiner, I think this will work. Thank you Anatolyg! 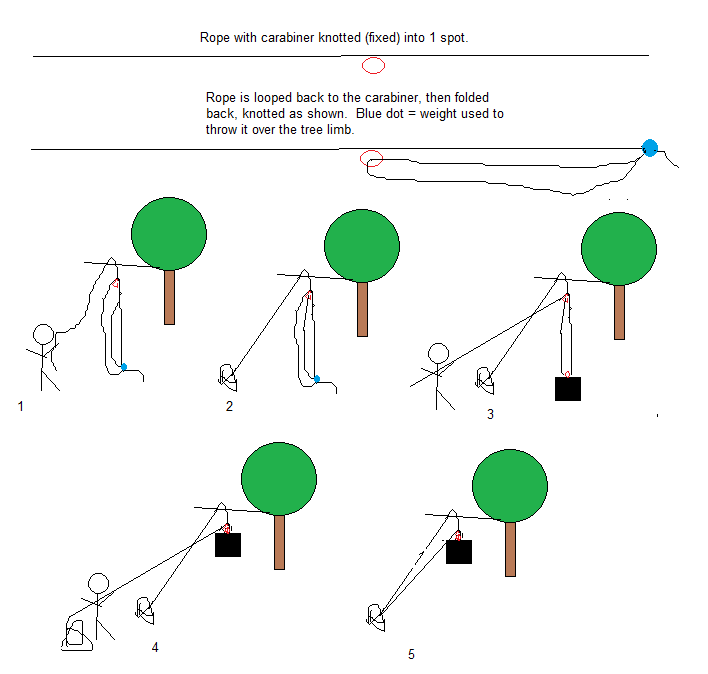 Arborists have this problem. The solution is a "friction saver" or "cambium saver". It consists of two rings, one large and one small, at the end of a length of webbing or rope. Here are some examples from wesspur.com 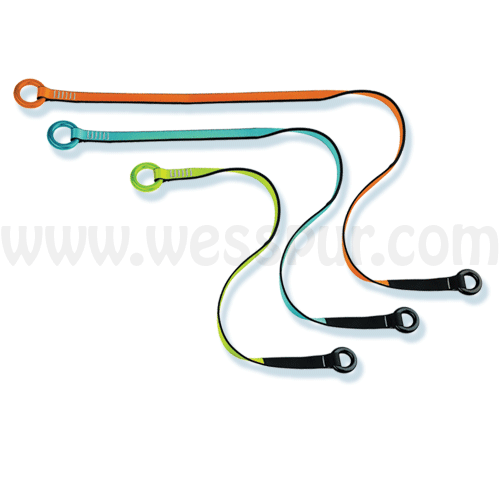 For light duty you could easily make a similar device yourself with two differently sized rings and a piece of rope. 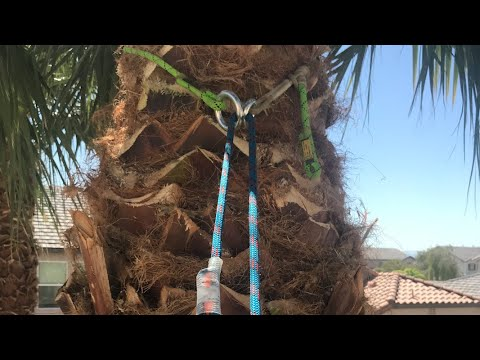 But how do you get the thing up there without climbing the tree first? Less obvious is that the rings are of two sizes to allow this device to be installed and retrieved from the ground with a throwline. I won't try to describe it all with words, since there are many videos describing the process.

Advantages of this approach:

A variation on others' answers (which I have not tried, but speculate should work) - if you don't have a carabiner or arborist's tools or whatever, you could make do with just the rope itself. Tie the end of the rope around the tree limb - use a square knot or other non-slipping knot to leave slack in the resulting loop. Pull the long end through the loop, so the rope itself can act as a pulley. If you want to be able to throw the rope over the branch because it's too high to reach, you could make the loop in the middle of the rope, set up the pulley configuration beforehand, then throw the other end over the branch and pull it down until it's in the spot you want it, anchor it, then use the pulley configuration to lift the water bag.

Note: the friction may damage your rope, in this configuration. I don't know how quickly. Going slowly and taking breaks for the rope to cool would would likely reduce damage, but I still don't know how many cycles the rope will last. (I'd hope more than one, at least, haha.) Still, if you find yourself in the woods with no other option, might be a trick to have up your sleeve.

This does require you to carry a bit more rope than might be absolutely necessary, but should minimize damage to the bark.

I think you're overthinking this.

This potentially scars the tree limb due to rope friction

Except that it doesn't, at least not easily. It can certainly scrape away surface moss and lichen, but this does no damage to the tree limb. And on a tree where there is substantial rot or insect damage under the bark, there is a chance that this could take off a section of already-dead bark - but again, this is already gone.

If you're staying in one place for the entire summer, you might want to arrange something more sturdy. In this case though your reasons will likely be more to do with damage to the rope, not the tree. For a shorter camping holiday, you would literally have to be using a rope saw to hang up your water bag in order to do any noticeable damage to the tree limb.

Not the answer you're looking for? Browse other questions tagged knots water or ask your own question.

18
Formula for rough amount of water to carry on hike?
8
Replacement tap for Coleman 5 gal. water carrier
7
Where can I find public water tap for cleaning/bathing in the Netherlands?
14
How to freeze a water container without deforming it?
3
Single walled plastic vs vacuum insulated water bottle for hiking and everyday use
6
Knot for pulling two branches of a tree together
8
What is the strongest knot using a steel-thimble to make a steel-eyelet at the end of the line?
2
Terminology for different ways of tying bends?
1
What knot or hitch can be used to lift a heavy load and secure it?