Accommodating the same microspikes to both bulky boots and smaller running shoes?

In the past I've used microspikes mainly with my big, bulky mountaineering boots. The size I was using was slightly on the small size for these boots, according to the sizing chart, and the microspikes were not lasting very long. I think the short lifetime was because of this, although it could also be from using microspikes to kick steps in hard snow, which is really more what crampons or bare boots are for. So I moved up to the size that is actually supposed to be used with these boots, and they seem to work fine so far with these boots.

I more recently went for a trail run/hike in lightweight running shoes. The microspikes over the nylon mesh running shoes actually worked really well for me that day. My socks eventually got wet, but I brought spares, and it was nice not to have the big waffle-stompers on my feet. The only real problem I had was that because the prow of the shoe was small and flexible, it kept poking through the gap at the front of the microspikes, between the chains and the rubber. It wasn't too horrible, but it was somewhat annoying when going down steep downhills. 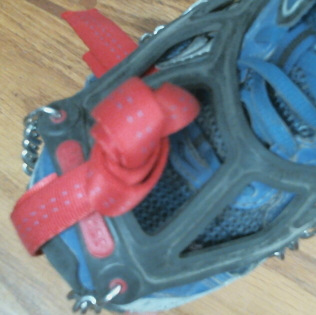 The image shows what I'm thinking of trying this weekend in order to prevent that. I took about one meter of nylon webbing and tied it through the front of the microspikes, with an offset overhand knot. (I think a waterknot would be more secure in webbing, but I wasn't able to get a waterknot snug enough.)

Has anyone experienced this problem or found any solution? Is the solution just to buy another pair of microspikes in a smaller size?

I have several ideas, but be warned that I haven't tried any of them. If you try them, please let me know which ones work or not, and I will edit (or delete) my answer accordingly.

All the ideas are based on threading a cord (such as a shoelace) through the chain links and tying it off in a loop (that knot is not depicted). Blue lines represent cords. Green circles represent knots. Here's the baseline image of microspikes on a boot (Kahtoola brand, original image from here): 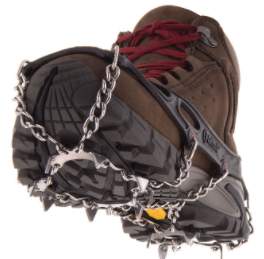 One horizontal connector, pulled tight to bring the two chains closer together: 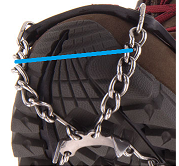 Add one horizontal tie, looped through the chain on both sides of the toe, and tie it tightly enough that the two chains can't slide apart wide enough for your toe to slip through.

Two ties in an X shape, with or without a knot: 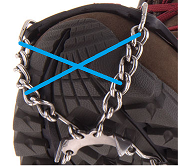 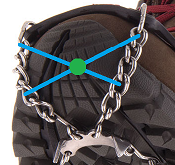 Similar to the horizontal connector, these ties should prevent the chains from spreading too wide and letting your toe through. If you add a knot to the middle of the ties, they also divide the one large gap into four smaller gaps.

Four ties, tied together with 4 knots to make a square toe pocket: 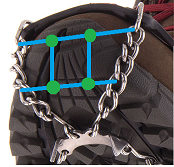 Here's a mockup I made using some scraps I had lying around, so you can see how the cords would be arranged: 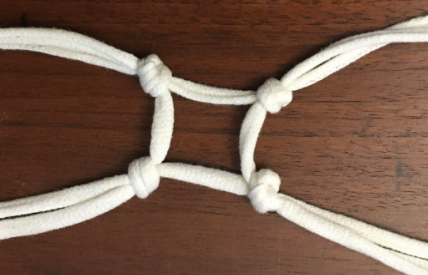 Here's what it looks like on the toe of a shoe (I leave the microspikes up to your imagination): 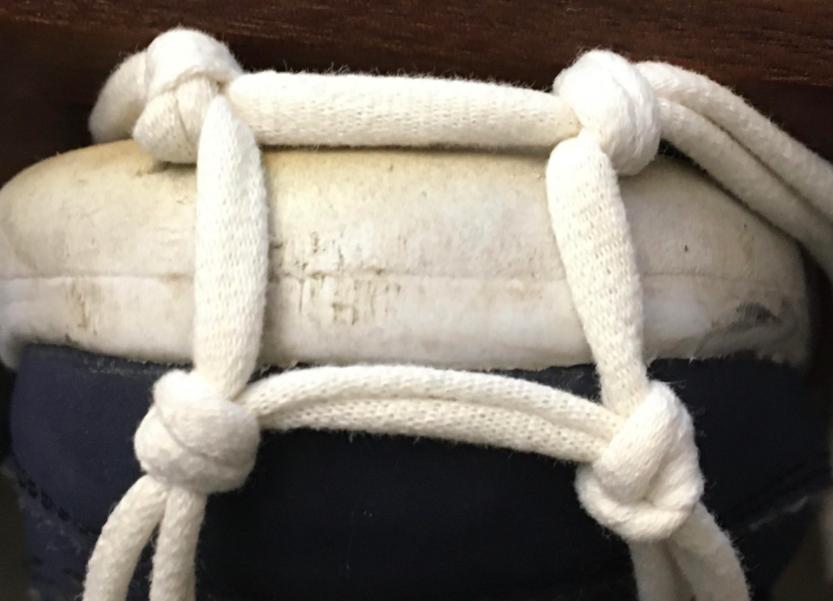 If one of these arrangements works well enough, you may find that the cords wear out after a while and need to be replaced. At that point, you should know whether the solution works well enough to invest in some sturdier cord or even small chains and metal clips.

Not the answer you're looking for? Browse other questions tagged snow or ask your own question.