I'd like to swim a bit to cool down when SUPing, but I've been already in an awkward situation when I've underestimated wind - the board was quite away from me after a while and I've got to swim fast to get to it. 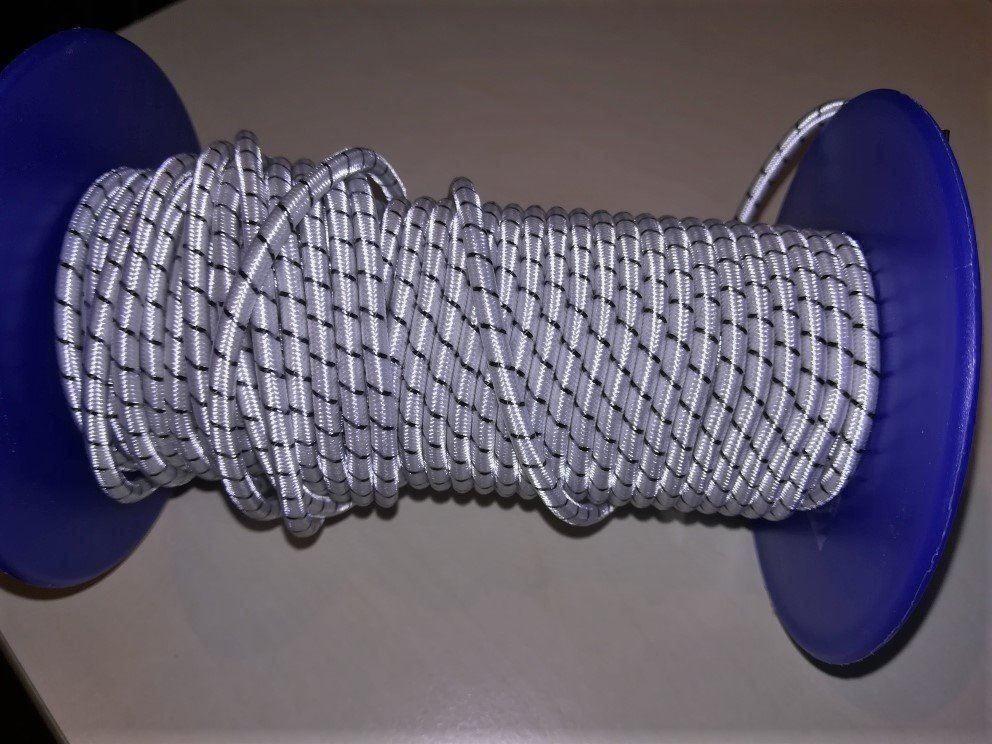 , but I'm not sure if it's strong enough (as the name says, it's designed to hold cow's tail while milking, however it's quite strong and robust and is used often by scuba divers to hold their stuff).

Another option would be the freediving leash, but it would be quite awkward since it's designed to be attached to the 'anchor' and go vertically under water and not to be used to swim on the surface.

Are there any tested options?

You seem to need what is fairly standard in kayaking and canoeing: a "buoyant heaving line". That's the official term (in Canada) for what is commonly called a "throw rope".

It is almost always made of polypropylene, because that floats well; is 15m to 20m long; is 6mm to 9mm in diameter; is brightly colored; and usually comes loosely bundled inside a little bag, to allow it to play out easily. 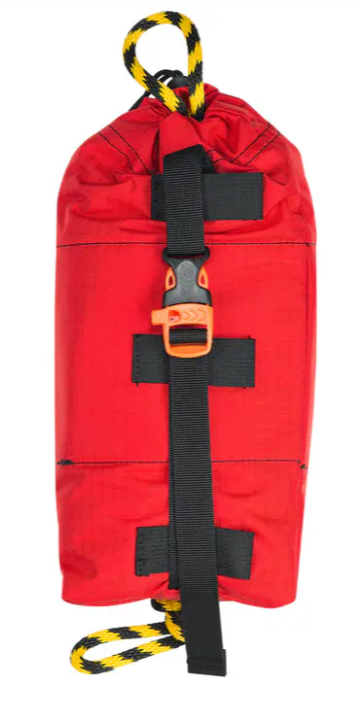 It's called a throw rope because it is designed as a safety line that you can hold onto one end and throw the bag -- with the rope playing out -- to someone else, for a rescue. The bag usually has a buckle, to clip it to your boat or board -- and sometimes the buckle also has a built-in whistle, as an additional safety device.

As a sea kayaker, I rarely use it as a throw rope, but I do often use it as a tow rope, to tow slow paddlers. It can also be used at camp, as a tarp ridge line or a clothes line. And you can use it to extend your SUP leash!

I am going to put a different spin on Martin's answer, but I would advise being careful with following my - untested - advice until you've seen it in practice.

What I would do is not extending the leash. Instead I would throw the throw rope out, with the rope uncoiled and one end tied to the board, before swimming. At least a 20m rope. If the wind starts picking up the board, the rope should drag in the water, as it is not carried by the wind, and gradually stretch out, before the board will put it straight and tow it at its full speed. Then you can swim to the rope before it is stretched to its full length.

Use at your own risk. I would still not do this in a context where you are at serious risk if you somehow missed it (i.e 500m from shore and up, less if you are not a strong swimmer). And I would also not do this seriously until having tried it several times with a strong offshore wind blowing the board in and gauging how it works in practice. Does the rope stay behind? How long of a respite do you get from it? How frequently do you need to watch the board? Risky? Safe? In doubt, consider it risky and extend the leash instead. If you are not a strong swimmer? Risky.

But compared to the warning to never loose a foothold/handhold on a turned over kayak in strong sea conditions, lest your kayak leaves you behind and the admonition never to leash yourself to a kayak, lest it you get tangled somehow? Seems a lot less worrying, to me.

From my point of view, the whole point of a paddle board is to go out in hot weather and swim, so I understand exactly where you're coming from.

I'm guessing you're using a standard ankle or knee attached leash which is really irritating for swimming. Open water swimmers use a tow float on a waist attachment, I suggest changing to a waist leash, that way it'll be less annoying to swim with and you can just tow the board around behind you.

The waist leash is largely aimed at moving water paddleboarding where quick release is important, so they're a standard product and you don't have to worry about improvising.

Not the answer you're looking for? Browse other questions tagged swimming paddle-boards or ask your own question.