I'm planning a hiking trip in Sarek this September, which would be my first time in Sarek. The remoteness and solitude is one the major reasons I'd like to go, therefore (and because the common tracks are too long for level of experience) I've created a custom track, about 91 km starting in Kvikkjokk.

Satellite imagery and maps will only get you so far, that's why I'm looking for advice from someone with experience in this part of Sarek, to give me an estimate of how "walkable" this track is. My main concerns are 1. swampy areas, 2. bushy areas. I will take a pair of water shoes (similar to sandals) and I'm ok with rough terrain, but I'd still like to know about any pitfalls or problems I might encounter on this route.

I've attached a screenshot of the route from Google Earth with Kvikkjokk as reference, as well as a link to the KML-file. If there is a better way for sharing the file, please let me know. 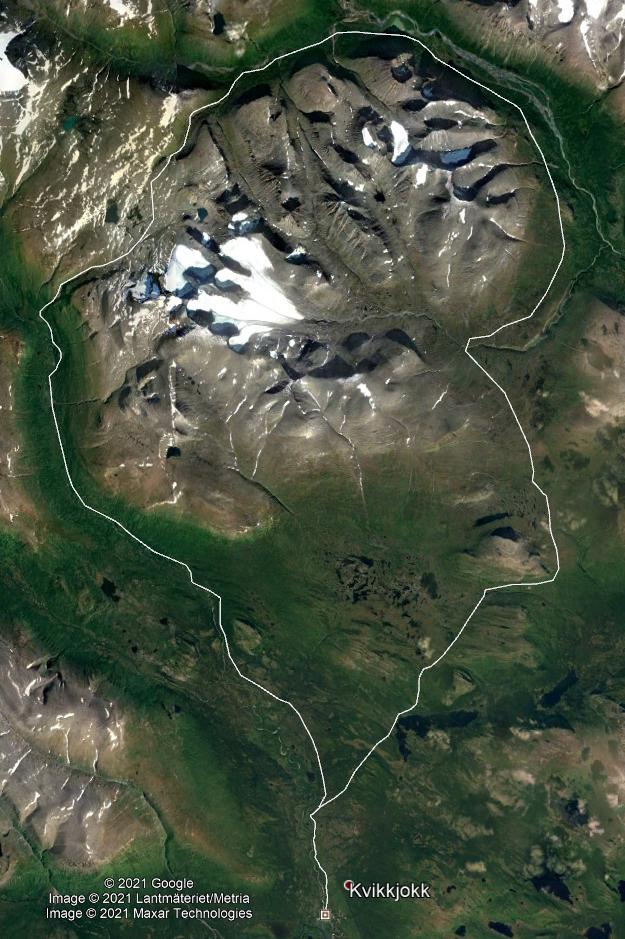 I have not been to Sarek, but in lieu of answers from people with that experience I can offer a few suggestions from following retired tracks or going off-track/out of season in the Kebnekaise area and some satellite images to compare with.

I expect you have a reasonable level of experience - it sounds like you are aware of your own abilities/limitations.

The time is good - late September/very early October has given me my best experiences up there, with few mozzies. The two things I would say, which may not require saying, is take enough time. When it went well for me in Kebnekaise I was negotiating with the train staff to move my ticket one day earlier at the end (and usually they have been kind there)! I averaged ~25km per day last time in Kebnekaise with perfect weather, but I doubt I would be able to do that in Sarek. (And take a pole for fording/crossing streams.)

The obstacles I see on the satellite map for your route are essentially what you mentioned, I would just add trees/forest, the latter looks to be there for the Southern and Western parts, but at least there seems to be a good trail in from Kvikkjokk at the beginning.

I wouldn't be surprised if you had to seek higher ground to get around it a couple of places. As an example, this North->South flowing stream/jokk and its ravines in Kebnekaise I could not pass during melting season, and the forest around them was dense, meaning I would have to backtrack far to get high enough up to cross the stream. The latter is relevant for you - very green areas where no tree trunks are visible on images may be hard to cross.

Bushes - there could be a lot of those. For example, this part in Kebnekaise, following an old track marked on older maps, but not newer ones required gaiters for me or my legs would get sore from essentially a slow birching or willowing now and then!

My book which shows pictures of the Rapa Valley (top of your route goes on the south side of it) makes it look like it is very wet, so again, I imagine high ground would be more comfortable. Your route does seem to take it, although it looks very green. Hard to see in the shade on those images though. Possibly worth nipping behind one or two of the mountain outliers there if you are OK walking on rocks and the weather is good.

This area on the South side of the Vistas valley is an example of terrain with a bit of forest and wet in places (but no bushes), that is passable to get to Lisas Stuga roughly bottom right, but it is hard work.