Radius of safety from forest fires

A hazard of being in or near a forest, at some times and places (as is being unfortunately observed in Canada and Siberia at the moment), is fires.

How far from the trees do you have to be, to be safe from a forest fire?

To be specific, say:

How large a clear radius would be needed before you can survive the smoke and superheated air? I get the impression even being a hundred meters away is not safe; is that correct? How about a kilometer away?

I was at Grande Marais rapids on the Churchill River. We'd carried the canoes over, but stopped for lunch on the uphill end, as the lower end was swamp and bugs. When we stopped for lunch we could see the smoke some 5-8 miles away, judging from the water bomber activity. Over the course of a leisurely lunch the wind shifted, the sun went copper coloured, then gone, and ash began to fall.

We packed up lunch, finished the portage and were on the water in another 20 minutes. As we finished packing, ash had changed to dead cinders. As we started paddling, some of the cinders were burning coals. A few kids had minor burns when they landed on skin, and it burned holes in the covering of a few life jackets. (A short water fight got everyone wet enough to quench sparks.)

From talking to a fire guy later, the portage burned down about 4 hours later.

We changed our route four times that trip. On a canoe trip in the Churchill River system this is reasonable and safe to do. The main river is mostly a chain of lakes. Tributary rivers like the Reindeer, Foster, Davin are also good sized, with frequent multi kilometer sized lakes. Any time two lakes are within a km of each other, there is probably a portage between them. We had a strong group and 40-60 km days were routine. (Not counting portages) It's fairly easy to put substantial amounts of water between you and the current fire front.

We made a point of camping on islands, and, on larger islands, using the upwind end.

We were in daily radio contact (sat phone) with our support station to track the fire's locations.

At one point we were paddling through a section where the fire had been. One shore was still burning, albeit somewhat fitfully. Ground fires were working the bits that the crown fire had skipped. Occasionally a tree would torch, and we'd feel a flash of heat from 100 yards away.

I did a trip in Willmore Wilderness (Alberta, BC border, north of Jasper Park) when BC was burning up. While the fires were never within 100 miles of us, the sun was burnished copper the entire trip, and the view from the passes ranged from indistinct to being inside a ping pong ball.

I had an InReach device, and exchanged texts with my outside contact twice daily for fire news. Our plan was to exit the park if fires got within 25 miles. Our route was planned so that the trailhead was at no point more than two hard days from our location.

Flip side: Often a forest fire will just be a ground fire that moves slower than a slow walk. This sort of fire can be fought with a shovel and pulaski, with fire fighters right on the fire front. Don't be fooled: Even with good communications, planes watching the fire, and professionals, the fires can blow up, and men die.

If you make a mistake and are caught:

There is no safe distance that can be cited. Encountering a forest fire while on a leisure activity should be considered an emergency and mandate immediate exit in the quickest direction away from a fire. Any other course of action puts yourself and rescuers in unnecessary danger.

Use your best judgement.

Given regular and reliable updates and telemetry about conditions, fire breaks, and fire evolution as well as good maps and support for quick evacuation, some safe distance (several air miles) from the nearest hot spot provides a buffer.

As an empirical example justifying the several mile status, from time to time the PCT is rerouted around fires and this is usually a 10-20 mile, well coordinated detour. Sometimes it is not possible

Anyone entering terrain where you anticipate unexpected fire should probably carry an emergency fire shelter. In the case that you are caught by surprise you might have a chance. 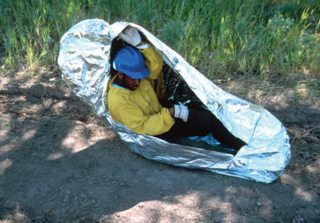 Now, this might look cozy but they are basically human baked potatoes. 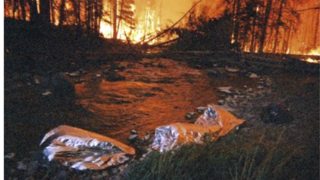 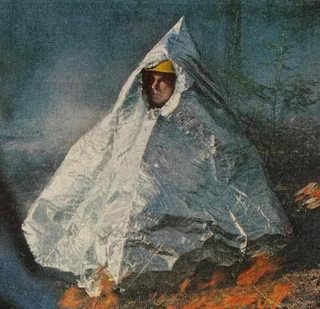