What animal made this hole?

I was mowing the grass and alongside my house was this hole that I only noticed today: 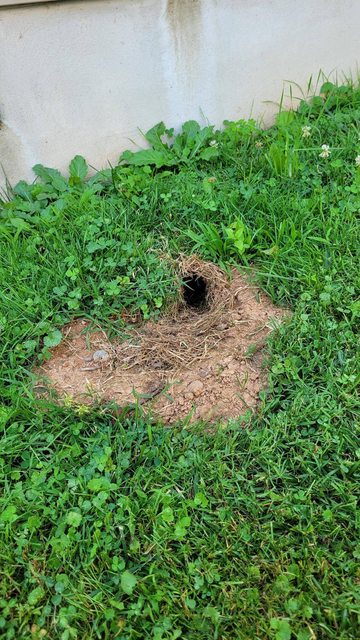 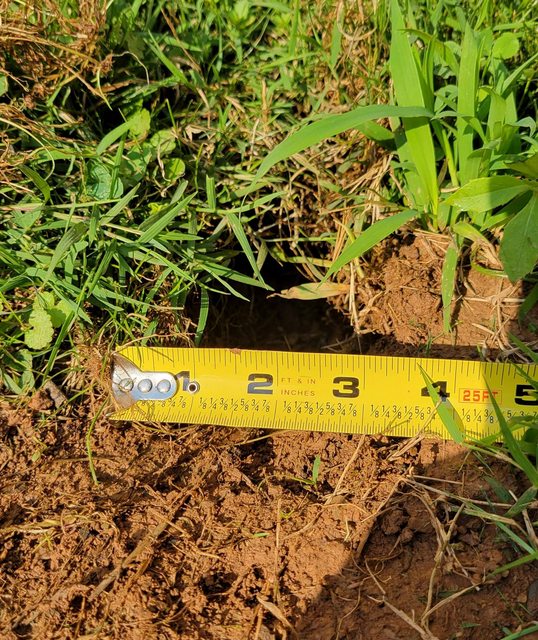 The hole is no more than a 2 to 3 inches wide and high, and it looks like some dried up grass was pulled into it - I'm guessing to make a nest. This is right next to the foundation of my house in southeast Pennsylvania.

What kind of animal could have made this?

Burrowing mammal is most likely. If the hole is less than 3 inches (7.5 cm), then the following two are the most likely candidates.

My first thought would be rats. Rats build quite extensive burrows to nest and to enter dwellings. I had a look at the mammals of Pennsylvania and the Norway rat (Rattus norvegicus) is the most likely candidate. As you probably know, rats are very common where-ever there are humans and are found in both rural and urban environments. Rats are nocturnal/crepuscular usually and quite secretive, so you may or may not see them around. Rats tend to leave the dug earth at the entrance to the burrow, which the next candidate doesn't do.

Another possibility is the chipmunk, which are also common in much of the USA. They build burrows for living as well as hibernation. They tend to have multiple entrances with a nest in the middle. Their entrances tend to be very clean as they carry the dirt away in their cheek pouches.

I would think mole or burrowing owl ( if native to your area) .Both (and prairie dogs) leave obvious entrances. Most animals make some effort at hiding the entrance.

7
What nocturnal animal in Massachusetts skitters around and grunts loudly?
6
PICTURED - What causes this sort of clearing?
28
What animal could strip all the bark off the lower 7 feet of this tree?
7
What kind of animal may have done this?
5
Animal Identification from "leavings"
3
What is this lizard-like thing?
3
What animal was killed here?
6
Are these animal droppings?
9
Is this a baby bat and what should I have done?
8
Help identifying this animal