How to deal with hordes of flies in outdoor toilets?

In countryside (rural) tourism, especially when it is single or few houses somewhere in the middle of nowhere (woods), instead of having a water system including proper bathroom one sometimes gets a well for water and a hole in the ground for a toilet.

During summer it becomes a huge attraction to all sorts of insects, especially flies. It can get so bad sometimes that it makes it hard to use the toilet, with tens of flies trying to fly into your nose, mouth, and eyes.

I am of the opinion that while in nature one should have as little of a footprint as possible, but bathroom being at the base of Maslow's pyramid demands some sort of solution nevertheless...

I have already tried:

None of which really do much, as the number of flies always beats whatever I throw at them.

Is there a good way to "get rid"(or make them go away) of flies in the outdoor toilets? I would prefer a non-lethal solution, but likely there not being an efficient one, I would appreciate a brutal one too, if there is such, as I honestly one time thought of making a fly flamethrower...

EDIT: @fgysin Posted a great answer for someone who owns a property. I didn't think to mention that I am not the owner of properties and can't do modifications any bigger than an average lodger can.

The answer is to limit and/or control ventilation. You want to make sure that there is little to no ventilation of the odours/gazes into the space (tent/hut/...) where humans are using the toilet.

This might be more or less practical depending on your specific setup, or rather how sophisticated your "hole in the ground" actually is.

What I have done in boy scout camps when building outdoor hole-in-the-ground toilets:

This will keep most of the odours contained, and will attract less flies. Also there will not be many flies in the hole/box, meaning they won't annoy you "from below" when doing your business.

Alternatively, if you can support an even better and more long-term setup: In addition to the above include a venting duct/flue which attaches to the box and raises up and away from the actual toilet space (tent/hut/...). This will let the odours escape, but further away from where you'll be doing business.

Furthermore, make sure there is good ventilation with fresh air of the toilet space. This is easy if your "hole in the ground" is, actually, just a hole behind some trees, but if you are building a tent/hut/... on top then including windows or other means to increase air circulation is mostly a good idea (depending in the weather). It certainly makes it more agreeable for users by reducing odours and in my experience also leads to less flies, since they love to gather in stuffy wind-protected spaces.

Your chief problem seems to be:

with tens of flies trying to fly into your nose, mouth, and eyes

Why not a mosquito head net? It's safe, re-usable, portable, and non-lethal!

Like the old saying goes: "If you can't beat them, let them join you!" err, or something like that... 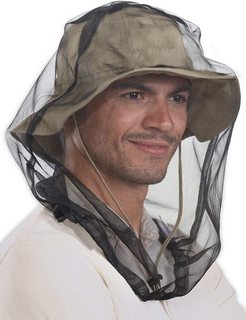 If possible, try to make a "dry toilet" use of the facility you've to deal with.

Dry toilet means that excrement will not be leaved exposed to the air but have to be covered with some carbon-rich organic material like saw dust, fine triturated hay or straw, dried leaves, or what so ever (triturated newspaper or what ever sort of paper/carton), if no organic material is available, then dirt from the ground could be of some use (or as a complement if you have not much organic material).

Such covering will prevent the odours of the excrements to get in the air and so it will not attract the flies.

Normally dry toilets are meant to be composted. So the receptacle is usually some bucket in which you will poo and cover the poo with the saw dust, triturated hay or what so ever. Then when the bucket get half full you will take it to some isolated place where you will empty it on the ground so it get composted naturally. At this moment when you empty the bucket you may need to ad some more saw dust / hay / etc, to be sure the whole thing get properly covered.

Then wash the bucket and set it back in the toilet.

One method is to provide a screened light-pipe as ventilator, and use an unlit room.

Deep-drop toilets often do not have a ventilation pipe, and are sometimes open to the sky at foot level, or just under the roof, or have no roof at all. Ventilation pipes are normally not open to the sky, to prevent rain or other things falling in.
It is, however, a fairly simple way of dealing with flies when building facilities, particularly where it's been identified as a sanitation problem.

We simply used builders lime (Ca(OH)2) (calcium hydroxide) powder after every toilette use to cover everything up.

But be careful with that, it's not a toy and can serious harm humans

The following is based on experience building toilets for places of worship in rural Africa:

Keep the toilet room dark. Without light inside the toilet room (tent/hut etc.), the flies are attracted out from below in the pit via other routes to the outside, not into the toilet room, e.g. via a ventilation gap in the cover above the pit, but outside the room. The flies follow the the light to get to the outside, rather than into the dark room where one does one's business. Without windows, it works very well, maybe just a gap in the bricks so it's not pitch black when the door is closed. People can keep the door open a little bit if they don't like "going" in the dark.

Not the answer you're looking for? Browse other questions tagged bugs forests human-waste repellent or ask your own question.