What are these tiny, round, black bugs on my bed and couch?

I moved into a house way out in the country in Kansas. Sitting in my bed yesterday I saw the tiniest, tiniest round speck. Perfectly round, black and somewhat shiny. I had to zoom in with my phone camera to see that they were alive. They move slowly. After realizing it was a bug I started to find more and more. They are on the bed and couch. Both are places the dogs have been laying. Could they be coming in on the dogs?

I thought maybe bed bugs but they don't really look right. I need help, my 2 year old son sleeps with me and I am worried that we are getting bit. They snag pretty easy and just leave blood. 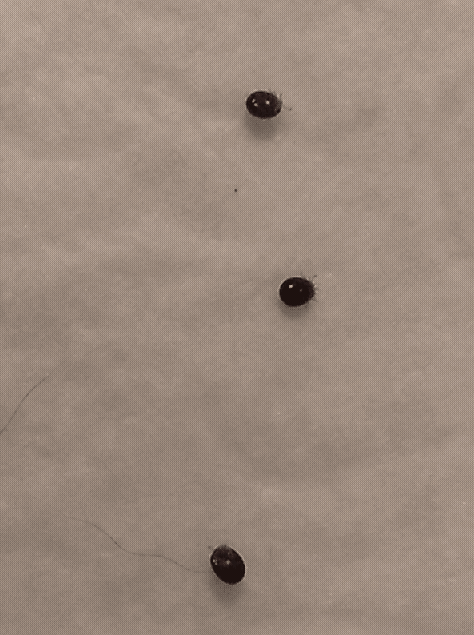 Those are certainly some kind of tick, with the three most likely kinds being the American Dog Tick (dermacentor variabilis), the Lone Star Tick (amblyomma americanum), or the Deer Tick (ixodes scapularis). These three ticks are native to your area. Additionally, all of these ticks has similar appearances when fully engorged as they are in your picture, making it harder to tell specifically which kind it is from the provided picture (and probably in general for most people). They absolutely could be falling off of your dog.

I strongly recommend you do the following: 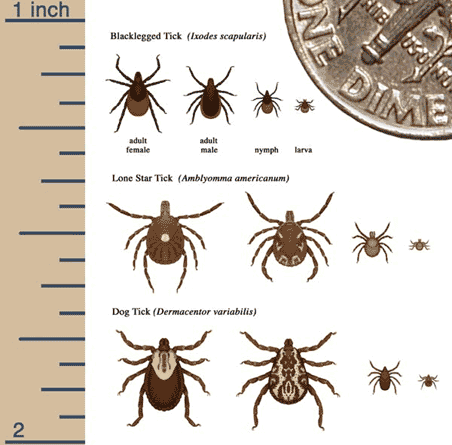 It is possible to contract Lyme Disease from deer ticks, which could make this a more severe situation. I would check your dogs over for symptoms of this. One of the most common symptoms of Lyme Disease is a red bulls-eye like ring formed around the bite of where the tick was.

Not the answer you're looking for? Browse other questions tagged dogs bug-identification ticks or ask your own question.

7
What is this black and white spider with a bowl/tube web in England?
11
Tiny crab/bug in Pacific NW; makes shell out of rocks/sticks. What is it?
13
What are these strange insect nodules on my front porch?
12
Does putting an item in a microwave oven kill ticks (and other bugs)?
9
What is this round, shiny black bug, about 10mm long, found in Singapore?
4
What is the rather large bug with a green body, black stripe down the middle, 8 orange legs , two large antenna and large chompers?
4
What is this brown catipillar with white stripes and two black spots near the head in Loveland, Colorado?
6
What is this tiny round shiny black bug that bites?