Belaying with two hands below atc

I was trained to belay at a summer camp by an adventure group. The way I was taught was to always have two hands below the atc and to pull up with both hands to tighten the rope and then brake with both hands and then slide them up one by one while in the brake position. I recently started climbing at a gym where they told me that this is an unsafe method of belaying, but I’m failing to see why. My hands are always on the rope. Am I missing something? Is this unsafe?

The standard belaying method taught to beginners at a gym these days is PBUS, which you can find out about by googling. There are other methods you'll sometimes see used, usually by older climbers, but the method you were taught has never been a standard one. So to the gym employee, it just looks like you have no clue what you're doing.

The main problem with your method is that's it's extremely strenuous and awkward. It's fine when there's almost no friction in the system, but as soon as any friction is introduced, e.g., because the rope is running around a corner, it becomes incredibly hard to pull in rope if you only apply force from below the belay device. The reason for this is that a belay device is a force-amplifying machine, and it will amplify the force in either direction. That is, let B be the tension in the brake-hand strand and C the tension in the climber's strand. Then the rope will stick if both B/C and C/B are less than some fixed value, which is typically about 10 (Fuss and Niegl, 2010). Normally C is greater than B, but when there is a lot of friction in the system and you're trying to pull in rope, B will be greater than C by the same factor. In the PBUS method, we use the left hand to reduce C to nearly zero, so that B can be very small. In the method you were taught, if C becomes fairly big, then you're just fighting the device to produce a big enough B.

I tried your method with a rope that I happened to have set up for a toprope, and I also found some secondary problems.

In order to reach down far enough to get the bottom hand under the top hand, I had to do one of the following: (a) hunch over, (b) lift the belay device a little bit above the belay loops of my harness, or (c) keep my hands inverted above the belay device. Option a is incredibly awkward and looks like the body position of a newbie who doesn't know how to belay. Options b and c put everything in a position that is not the right position to hold a fall. If you were doing b or c, then the gym employee was right -- your technique was not safe.

The other problem I found was that when there was enough friction in the system to make me work hard to pull in rope, pulling in rope became an extremely slow process. That meant that I was not spending most of my time in the passive, comfortable braking position, ready to catch a fall. You want to be in braking position almost all the time if possible.

You were probably taught the "Waterfall Method" or "Up-Down-Slide-Slide".

Just this year I was re-trained in this method at a youth program camp. Here's the description in the text they gave us: 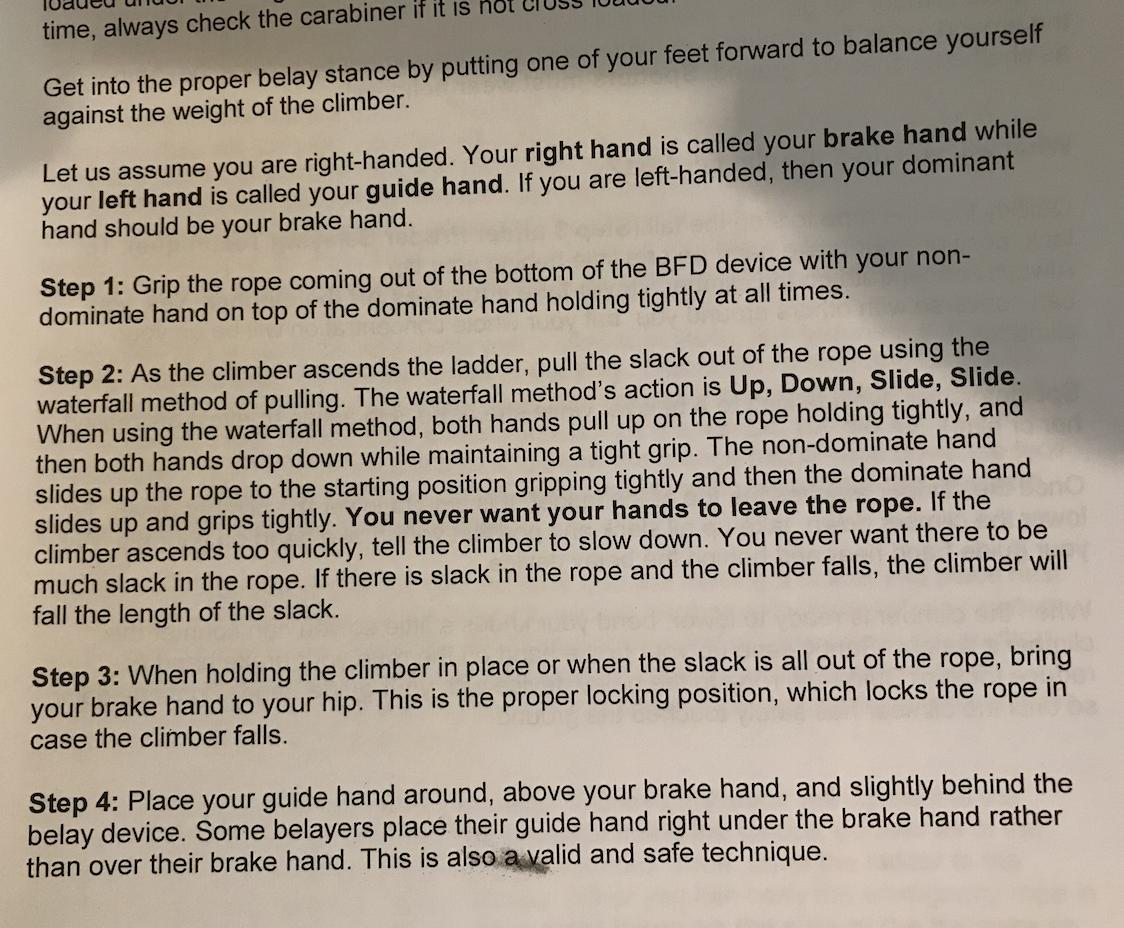 It is a very secure method, in that the brake hands never come off the rope, but it isn't as efficient as the Pull-Brake-Under-Slide method (What are the steps in the PBUS method of belaying?), especially with higher friction systems. I believe the youth group chose this method for it's reliability and simplicity, especially for consistency in training a more casual pool of adult volunteers with its own non-AMGA-certified adult volunteer trainers.

Your gym (or your adventure camp) can set its own house rules, and standardize on the more efficient Pull-Brake-Under-Slide system, and has to do some level of diligence in enforcing its guidelines.

Where the differences between the Waterfall Method the PBUS Method might come into view is in managing slack and friction -- the Waterfall Method doesn't have a mechanism for giving slack without the climber pulling it for themselves, while the PBUS method can use the guide hand to pull the rope back out of the device. For friction, the PBUS method allows you to use the guide hand to feed the rope into the device and untangle curls, or to maneuver the rope out of the way of the climber. Strict adherence to the Waterfall method doesn't permit those manipulations. Where it the waterfall method might be unsafe is in situations with excess slack or twists in the climber's rope, where one might attempt to use a guide hand, and not keep a positively clamped-on brake hand, as the PBUS method emphasizes. The two-hands-below-the-ATC Waterfall method is secure for what it does, but doesn't give good guidance for some common scenarios. As soon as you consider how to safely handle giving slack, handling twists, or several other common situations, the Waterfall method degenerates into one stage of the more versatile PBUS method.

If you know PBUS, you can do Waterfall, but if you are trained in only Waterfall, you may not be able to give slack or lower as safely as you can with PBUS.

My youth program (and also my climbing gym for after-midnight programs) requires backup belayers, and half-heartedly trains backup belayers to use a hip belay. For a hip belay, rather than a friction-plate device, the older Slip-Slide-Slap belay method (Correct and incorrect slip-slap-slide belay technique) works well for managing the rope.

Not the answer you're looking for? Browse other questions tagged rock-climbing belaying or ask your own question.

11
Correct and incorrect slip-slap-slide belay technique
2
What are the steps in the PBUS method of belaying?

20
Climbing with a much lighter partner?
7
What is the term for/manufacturer of belay devices with a clip that holds the ATC onto the carabiner?
6
Lowering a climber from above using a belay device in autolocking mode
13
Belaying two seconds?
9
Difficulty belaying with a Gri Gri
11
Belaying directly off a ground anchor?
9
Big wall strategies for a three-member team
5
Dealing with twists in a rope while belaying
12
Is belaying with a hip belay unsafe?
2
Dynamic belaying in trad climbing