Climbing attached to a carabiner rather than tying in

I noticed on the auto-belay walls, the was a carabiner you clip to your harness (I assume in the belay loop).

Is it safe to tie a climbing rope to a carabiner for top-roping / lead climbing? The idea being if I was with a group of friends, we could quickly swap the person climbing without them having to tie in each time.

Sorry for any incorrect terminology, very new to this

In theory yes that is something you can do. I would recommend using an oval 3 way locking carabiner or two screwgates. Connecting the rope with a double figure eight is a good and safe option.

But there are good reasons why it is usually not done:

When you are lead climbing you have to untie the knot anyways since you have to pull through the rope. Further I find it a bit more annoying having an additional carabiner at the belay loop while clipping when leading a climb.

For toproping there might be a small usecase, but I mean how much time do you really need for tying in? If you need more then a couple of seconds then some practice tying a figure eight will not hurt anyways.

Clipping a carabiner into the belay loop instead of tieing in is a fast way to get people on the rope. It can be useful when there is a large group of people that want to climb but are not experienced to tie in themselfes, e.g. marketing events at the climbing gym. However, it comes with some drawbacks which is why it is not recommended for general use by the German alpine club: click, click (see also table on page 3). In general, there is the risk of making climbing too accessible for people that do not have the necessary knowledge to judge whether the setup is safe

(source)
Carabiners have their maximum rating only along the major axis. A carabiner gate getting hooked on something and loaded sideways onto the gate has its strength greatly reduced, typically to ~7kN. This should still be enough but is an avoidable security risk 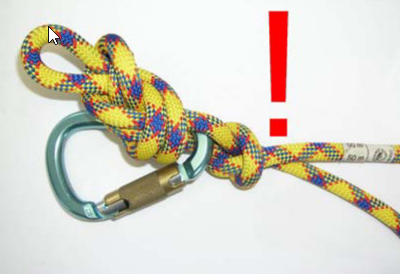 People might clip into the wrong loop at their harness
Granted, this can also happen when tying in but clipping is so much faster. Gear loops are only rated to very few kilos and will break at the climbers weight, even without a fall

How to do it better
The safest way to have prepared top rope stations (or auto belays) is to use via ferrata style carabiners that have an additional attachment point and cannot be easily unclipped in a setup similar to this: 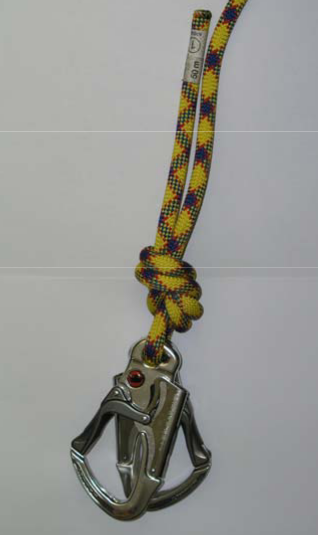 Our modern default practices evolved from mountaineering, where the expectation was that you and your partner would tie in to opposite ends of the rope and stay that way all day without untying. In that context, tying the knots was a totally negligible portion of the total time spent climbing.

I'm aware of two common use cases where people tie in with a carabiner. One is when you have children or extremely inexperienced adults, and you don't want to have to teach them how to tie in and check each other's knots. Another is when you have a rope team, such as for glacier travel, with more than two people. Then anyone in the middle of the rope will commonly tie a butterfly knot and clip in with a locking carabiner.

In sport leading, mountaineering, or multipitch, one usually would not want to use a carabiner for this purpose, simply because it gets in the way, adds to the weight of your rack, and uses up a useful locking carabiner that could otherwise have been used for other purposes.

At an indoor climbing gym, doing this is probably a bad idea for a couple of reasons. (1) If the idea is to do it with inexperienced climbers who would otherwise take a long time to tie in directly, then those people may be prone to making a variety of mistakes, such as forgetting to lock the locking carabiner. Their training is sketchy, and they don't yet have it in their muscle memory. That makes it a bad idea to introduce some whole other technique. (2) The gym employees want to be able to walk around the gym and see easily from a distance that people are properly tied in. At my gym, I believe this is why they ask everyone to tie an overhand backup -- not because the backup serves any purpose (it doesn't) but because having enough tail to tie the backup knot makes it visually obvious from a distance that the figure eight was tied with a long enough tail. Any gym employee who sees you toproping with a nonstandard setup is going to have a WTF moment, and will not be able to verify whether the biner is locked.

What sort of carabiner should be used?

Would you clip it to the belay loop on the harness?

Would a double figure-8 followed by a stopper knot be sufficient to secure the carabiner to the rope?

Normally you would just tie a figure eight on a bight. When tying into a carabiner, which can be opened or closed so that you have access to its jaws from the ends, this is an easier way to tie the same knot as a rewoven figure eight. An overhand backup is never actually of any use, and in this case doesn't serve its purpose of making it easy for a gym employee to evaluate things from a distance.

Is it safe to tie a climbing rope to a carabiner for top-roping / lead climbing?

It's safe if the knot is tied properly and the carabiner is locked. But I can't imagine why you'd want to do this when leading. Anyone competent to lead should have no problem tying in efficiently in the standard way, and I would think that the amount of clutter added by the biner would be extremely annoying on lead. In the gym, you would also be forced to pull the rope down from the climber's end, whereas most people I climb with prefer to pull it down from the belayer's end. Pulling it down from the belayer's end has two advantages: (1) you don't have to worry about hitting anyone with the rope when it falls, and (2) you can leave a stopper knot in the belayer's end to protect against the goof where the rope is too short for the wall.

I do this. We have some giant locking carabiners rated well above 20kn that we use only for tie-ins and belay endpoints. The point of using these giant carabiners is the energy absorption; their large size allows them to absorb far more thermal energy than a normal sized one would. This becomes important when rappelling. This used to be important when stopping a fall but a modern rope doesn't need the belayer to do dynamic braking anymore.

Point of note: our harnesses are designed to be loaded directly on the belt. Most harnesses in the store do not work this way.

The dedicated caribiners have this habit of turning themselves to the correct orientation when a load is applied in a way I've not seen other caribiners do; otherwise a cross-load risk would appear for the lead climber. These are twenty-turn lockers; that's not easily coming undone by accident on the harness itself. Today I've heard of the risk of clipping the wrong part of the knot but I'm having a hard time imaging making that mistake. It's in none of my textbooks, even in the ones that insisted the only right way was directly into the harness. Unless I'm in a big rush I use a rather complicated tie-in knot which would make the mistake more obvious than even the double figure-eight but even so ...

The carabiner is set on each harness at set-up time and remains there throughout the climb. The rope itself need not do so. Think about it really hard; when switching from climb to rappel you must untie the rope from both ends to get a doubled rope. The technique involved here is each of us has at least one prusick loop stored on the harness. When not being used as a prusick loop it is used as the tie-in to the anchor while not climbing so that the rope can be freed without disconnecting the belayer from the anchor, as is done when transitioning to rappel. (We no longer use a prusick as a backup when rappelling but if we would do so due to the conditions it would be set up after the rappel device. Some of us climbed with multiple prusick loops, but in this case I used a random webbing loop as my tie-in while preparing a rappel.)

Not the answer you're looking for? Browse other questions tagged safety rock-climbing climbing or ask your own question.

19
Backup prusik for Abseiling: Where does it go?
16
Should a carabiner ever be clipped to the tie-in loops and should anything other than a carabiner ever attach to the belay loop?
20
Why do many climbers appear to not trust their belay loops?
20
Climbing with a much lighter partner?
11
Belaying directly off a ground anchor?
11
Climbing harness: clip two carabiners to avoid cross-loading
4
Tradeoffs between different stopper knots
6
When clipping into quickdraws, is it dangerous to pass a finger through the gate?
5
Why do the GriGri and rope tie into different points on a rock climbing harness?