My wife are around 30 years old. We are experienced trekkers (South America, Israel and Nepal), but in average-or-less physical shape - we're working in offices most of the time.

We have booked three nights in the Kepler track. Unfortunately, Luxmore Hut was full, so we have a very long day between Brod Bay and Iris Burn Hut: 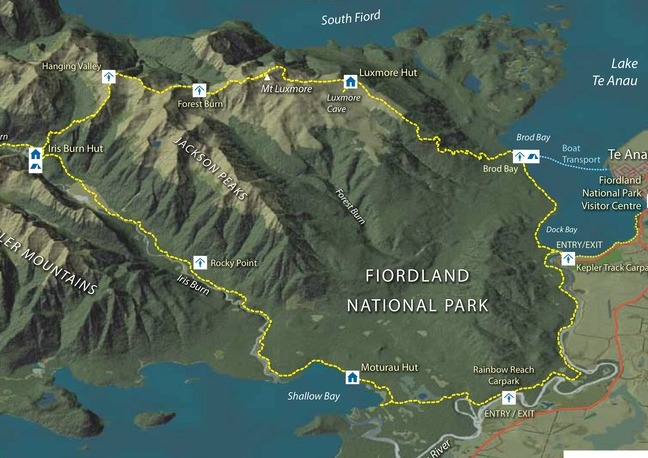 Given the height profile:

Is it reasonable to walk from Brod Bay to Iris Burn Hut (approx. 22.8 km) in one long day?

In average to less than average physical shape, I'd say that is pushing it a bit. There is a serious incline followed by a steep decline, which are going to slow you down. It's going to make for a very long day. If everything goes well 10 to 11 hours, if you don't stop for breaks or lunch. If you are in less than average health then you will probably need breaks. The greatest concern for me would be risking the downhill in the dark. If you do run late and into the night, downhill becomes much more dangerous.

In addition to your fitness level, it's also important to let us know the total weight of the gear, which will make a difference.

Reasonable is a matter of perspective, but I would plan on a long grueling day, probably finishing after dark (for someone at your level).

Can you do some local training hikes on similar terrain before heading out there? That will give you a good idea of what your capabilities are. Even if you don't have similar terrain, you could creatively use what you have. In other words, I have a local park with 250-foot hill climbs. If I know my target hike will have a couple 1000-foot climbs, I could do 8 laps on the local hills to get a rough idea of what I'm in for.

Not the answer you're looking for? Browse other questions tagged new-zealand trekking or ask your own question.

20
Maintaining a Mountain Hut
11
Week long trek, how far each day? pace?
9
How to carry perishable foods on a multi-day trip, without it going rotten?
4
How to record 2-day trek track when Garmin etreX 20 has limitation of 2000 points?
7
Good two-day tour for the "Trekkinghütten" in the saxon switzerland
10
Should I use one or two trekking poles?
4
Are cheap Packable Backpacks reliable enough for a long day strenuous hike?
1
What is the feed/day limit for various pack animals?
4
Need advice on custom track in Sarek National Park