Where in Europe is wilderness meeting the U.S. wilderness definition?

In this excellent answer, LBell quotes the U.S. definition of wilderness:

(1) generally appears to have been affected primarily by the forces of nature, with the imprint of man's work substantially unnoticeable; (2) has outstanding opportunities for solitude or a primitive and unconfined type of recreation; (3) has at least five thousand acres of land or is of sufficient size as to make practicable its preservation and use in an unimpaired condition; and (4) may also contain ecological, geological, or other features of scientific, educational, scenic, or historical value.

Is there any place in Europe that meets these requirements? 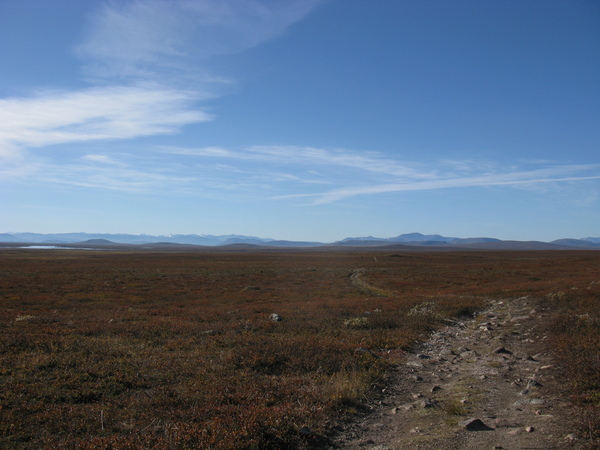 I think, if there is wilderness anywhere in Europe (not counting Arctic islands such as Svalbard), it's likely to be in far north--eastern Europe, where there exist vast areas with very few people. For example, Komi is 415,900 km², roughly the size of California or Sweden, with less than a million people concentrated in a handful of cities. That's probably a wilderness area. Are there any others that are less peripheral?

During the last years the society identified close to one million hectares in Europe that meet at least the bronze standard. These areas are ex glacial,areas in Austria, forest in Georgia, Aquamarine areas in Scandinavia and mountainous areas in Portugal and Italy. Ukraine, Bulgaria and even Albania and most notably Romania (Retezat) are now in the process of certification. Scandinavia has few remaining pristine wilderness due to logging and herding, Oulanka being an exception. Belarus and Poland has some areas.

Little remaking Wilderness at this point in time has been found in France and the UK. Here restoring is the top priority. Ireland has just designated the first area with 10.000 hectares. The Netherlands are working on an Aquamarine Wilderness area.

Large Herbivores and Carnivores are essential to the Wilderness Ecosystem. We helped reintroduce Bison in Romania and similar projects are underway in Germany, Poland, Ukraine, Bulgaria and Slovakia.

The Wolf is coming back in almost every European country with large numbers in Romania, Spain, Bulgaria and now even in Germany with 18 Wolf Packs roaming the country side. The Lynx is also coming back as can be seen in Austria. The number of bears is increasing in Italy and The Balkans and Carpathians.

Basically the four different levels of Wilderness start of with small areas with subsistence remaining human intervention and go up to large areas of 20.000 hectares with no human intervention nor extraction like fishing, hunting or logging. Even roads are in the top level being taken out and any use of mechanical vehicles is off limits. Austria has for example changed its forestry laws that do require a forest fire to be extinguished anymore since fires are part of the wilderness continuum (NP Kalkalpen)

The European Wilderness Society has an extensive website and blog where Wilderness Advocates can inform themselves about the latest events and information. They work in a Network with Wild Europe, the Wilderness Society in the US and Australia, the Department of Environment of the EC and many Universities like Leeds in the UK and Alpen Adria University in Austria.

The goal of Europe is to identify, designate and protect or restore a minimum of 2% of the landmass as wilderness? especially Germany is here leading this movement and will set designate close to 150.000 hectares of new Wilderness Areas in the next few years.

Ukrainian Gorgany. One of the most wild places in Europe.

Mieczysław Orłowicz has written almost 100 year ago about one of the peaks, Popadia, that from there no place inhabited by men is to be seen. According to people that were there, this sentence is still true. You will not see any artificial lights from houses, streets or cars.

Unfortunately, I haven't found the translation from the tourist guide of Orłowicz, but this is very beautiful fragment describing how wild that mountains are.

Peručica forest in Bosnia might almost fit the definition.

In the National Park »Sutjeska« (17,250 ha) the strict forest reserve »Perućica« (1,434 ha) is located. Sutjeska can be found in the southern Dinaric Mountains in Bosnia and Herzegovina, near the border with Montenegro. In this mountainous area altitudes range from 500 m in the Sutjeska river valley to the top of Mount Maglic, 2386 m, the highest peak in Bosnia and Herzegovina.

Perućica is allowed to enter with a guide only. In the reserve there are no landmines from the the Bosnian War, the only area where they may occur is the lower end of the reserve (in Sutjeska Canyon, near the road).

Perhaps my favourite wilderness like place, Dartmoor, fits the bill relatively well. It's in the South West of the UK, in Devon.

Generally appears to have been affected primarily by the forces of nature, with the imprint of man's work substantially unnoticeable

Well, how far back are you talking? Technically speaking, thousands of years ago Dartmoor was all forest area, the trees were hacked down by man to make open space and it's stayed barren since, bar a few areas. More recently (in the last few hundred years) it was home to many tin mines. But it's pretty clear that if you go walking on it, these are all long gone and man's influence now is minor. There is some occasional army activity, but only in certain parts and the affect on the landscape is minimal.

But if you take this to extremes, where do you stop? Unless we knew for sure that man had never settled in the particular area, then we could never describe any land as a real wilderness.

I'd say it fit well into this category.

In the more remote parts, especially during week days, I've walked for days without seeing anyone. So a big check on this part as well I'd say!

May also contain ecological, geological, or other features of scientific, educational, scenic, or historical value.

Its tors are unmatched, it contains a rich geological history, the barren landscape is incredibly scenic.

The only thing I'd say which may stop this being a "wilderness" by the given definition is the army activity that's ongoing, but even if you exclude the part of the moors where that takes place, the remainder is still well over 5,000 acres, so I'd say still qualifies for being a wilderness area.

I'm afraid we are out of luck in this one. But maybe this will qualify, although barely: http://en.wikipedia.org/wiki/Oleshky_Sands

Not the answer you're looking for? Browse other questions tagged wilderness europe or ask your own question.

14
Hiking popularity in North America vs. Europe
10
Is there National Park-equivalent protected nature in the United Kingdom?

78
Where in Europe is wild camping permitted?
14
Finding water in the dry wilderness
14
Hiking popularity in North America vs. Europe
4
What are some good guides to the U.S. national forests, specifically those in California?
12
How to protect a body in the wilderness?
5
Camping alone in the wilderness in the USA
4
Do U.S. Wilderness areas allow bridges?
4
What percentage of the world is “true wilderness”?