I have been given conflicting information for how to minimize the impact of traveling in small groups in wilderness areas.
For groups traveling off-trail in areas where it is appropriate I have heard the following:

Does anyone know of any credible sources backing either of these contradicting approaches, or even advocating a third?

You have heard both answers because both are right depending on the area and ecosystem.

Established trails: If there is an established trail going where you need to go, you should stay on it. Even to the point that in a mucky area stay in the tread, rather than create a new trail beside it which might be dry for a while, but will eventually become a new mess. This creates "braided trails" which can mar a whole open meadows are a pain to rehabilitate.* Never cut switch-backs.

Cross country: when striking out cross-country, you need to consider the surface and the impact it can handle. In alpine areas, if in doubt, spread out. Primarily we do this because it creates multiple faint trails instead of one impacted one, which can recover faster. Also, you would be surprised how many people see an obvious trail and say, "wonder where that goes" and follow it, compounding the problem. They are less likely to do this on a faint trail.

A major exception is in the desert where you might encounter cryptobiotic soil in which a single footprint can last dozens of years. If you can not find a way around the crypto (which is critical for preventing erosion) 1) re-consider why you need to go where you are going, or 2) make the fewest number of steps through it, and have everyone follow in the same footprints.

Sidebar: If you do find yourself wandering cross-country, please do not build a cairn to encourage others to follow. This funnels impact along a single route creating erosion issues where dozens of people could wander spread out without having that much impact. A large chunk of my time as a Wilderess Ranger was spent kicking down cairns on non-established trails. Let the next traveler figure out their own route.

*You could argue the trail should have been placed in a better drained area, but sometimes that is unavoidable.

You say you go to wild places to get away from trails, but that is actually the root problem. One purpose of trails is to funnel all the human use to narrow areas to minimize the overall damage. Lots of places have policies that you need to stay on the trail for this reason. This is especially important in high use or fragile areas. Examples of the latter are alpine tundra areas. It can take 100 years for vegetation to recover from trampling.

So since you're not the only human on the planet, stay on trails except in the special cases where usage is low and damage from footsteps is minimal. We simply don't have enough wilderness to allow everyone to walk wherever they want to. Staying on the trail is one of the sacrifices we all have to make most of the time to leave the wilderness largely the way we found it. Conversely, trails are things we have to accept as a necessary part of the wilderness.

There are exceptions, of course. Lots of people can scramble over the same bare rock without meaningful change. Many places in the desert are fine for wandering around since so few people do compared to the size of the land, and you can mostly walk on rocks or bare dirt such that a few footfalls are pretty much irrelevant. But in the general case, the answer is you don't get to do that at all. Check the local regulations about off-trail hiking.

Here are some examples. 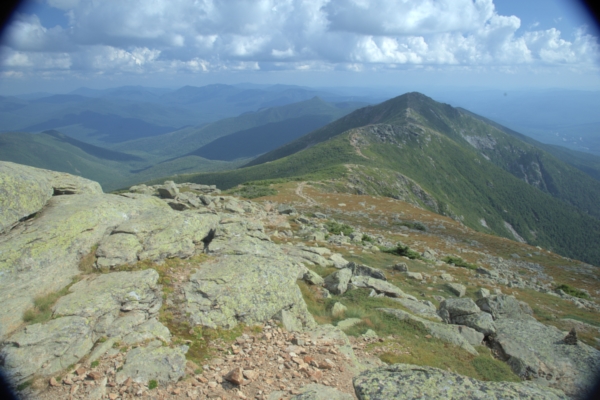 This is Franconia Ridge in the White Mountain National Forest of NH. You are supposed to stay on the trail here, and they take it quite seriously. Just a few footfalls can kill the sparse vegetation, and it takes a long time to grow back up here above tree line. The trail is well marked and is heavily used. It is not only a popular area in its own right, but is also part of the Appalachian Trail. If even just a few percent of the people that came by here wandered around off trail, this area would be just bare rocks and dirt in short order. The summits are all patches like that because people do wander around a bit.

On the other hand: 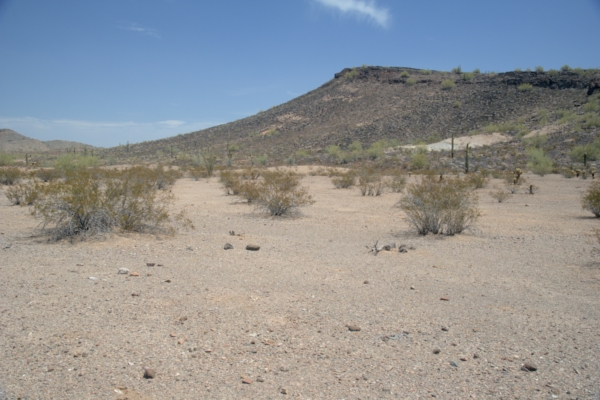 Here you can walk around all you want. In fact you have to because there aren't any trails. But as you can see, it's easy to walk where you're not causing any lasting harm. You may leave a few footprints, but after the next rain or after enough wind they will be gone with basically no evidence you were ever there. This happens to be in the Eagle Tail Wilderness in southwest AZ. So few people go there that it's OK. If 100s showed up daily, then different rules would need to be made.

Not the answer you're looking for? Browse other questions tagged backpacking wilderness etiquette conservation groups or ask your own question.

18
When is it appropriate to make a cairn?

19
Where in Europe is wilderness meeting the U.S. wilderness definition?
14
Minimizing ecological impact of winter-sports in the backcountry
3
What areas in the south-western US are the wildest?
12
Group Trips: 1 Large cook group or smaller cook groups of 3 or 4?
6
Groups: What are proper occasions for a large, shared hole for waste?
6
Under what wilderness conditions is becoming infested with lice a possibility and what precautions should one take to avoid it?
12
How to protect a body in the wilderness?
3
What are the arguments for and against allowing bicycles in wilderness areas in the US?
8
What group of people call themselves “Outdoor Influencers”, and what do they do regarding natural areas of land?
3
Do U.S. Wilderness areas allow bridges?