What is a good knife for survival in a forested environment? [closed]

Want to improve this question? Update the question so it can be answered with facts and citations by editing this post.

What style/size of knife would be most useful in a survival scenario in the forest?

There's no simple answer to this question - everybody has their own preferences. (That being said, I'm a big fan of my straight edge SOG SEAL Pup Elite and would highly recommend it). There are a few simple guidelines, though.

I'd suggest something with a (1) thick full-tang blade, so you could chop down some small trees if needed. But (2) not too big, so it's still comfortable for carving fire spindles and whatnot. (3) Straight edge is better than serrated - you're unlikely to need to skin a bear in a survival situation, but carving with the serrated blade is a pain. Serrated blade is also not very easy to sharpen.

And remember, the best knife is the knife you have on your person when you need it. So, although a big beefy knife might sound like a great idea, chances are very high you're not gonna have it in your pocket when you really need it. Go with practical, not fancy.

Classic but less bombproof (because of the lack of a full shank):

The traditional standard is the USMC Ka-Bar knife.

Generally I look for

Assuming you're going survival, whatever you choose needs to be able to fulfill the following roles.

In bushcraft and survival there are a range of tasks which a bladed tool can be used for. In the context of woodcraft and survival you are likely to be a lot more interested in making tools and implements, preparing wild food and game and generally extracting resources from your environment than in normal camping or trekking so basic and general purpose tools become more important in comparison to specialist equipment that you carry with you.

The context of survival as opposed to woodcraft usually implies an unexpected emergency situation so it is often a case of using whatever you have available. Similarly a survival kit may is likely to be tight on space and weight.

At this point it is well worth saying that there is no advantage at all in buying an expensive knife untill you have the experience to make an informed decision for yourself about what makes a good knife.

Similarly the ability to sharpen a knife properly will give you vastly more practical benefit than one made from some exotic super steel.

For actual survival a large chopping knife like a golok is likely to be of the most immediate use as it will make easier work of jobs like building a shelter and splitting kindling as well as being versatile enough for a range of scraping, carving and digging jobs and is adequate for carving tools and preparing game.

Ideally this would be supplemented by a smaller knife better suited to fine tasks and it is also worth noting that large knives like this do need some care, forethought and practice to use safely (not that small knives don't)

In my experience mid sized (5" - 14") knives tend to be a poor compromise being unwieldy for fine tasks and lacking the right balance to be useful for chopping.

A viable alternative is a small woodsman's axe although here a bit more care is needed in selection as most common small axes and hatchets are intended only for splitting firewood and not that well adapted to a more general purpose role.

As already mentioned it is better to invest time in learning to sharpen your tools properly than spend a fortune on expensive blades and similarly make sure that you keep a basic field sharpening kit with the tool, ceramic or diamond stones are a good lightweight solution.

For relatively inexperienced users there is also a lot to be said for lightweight folding saws as they are intuitive and reasonably safe to use although they do need to be backed up by at least a small knife as they are useless for slicing type jobs (food prep, carving etc)

Unless you are in a saltwater environment I would tend to recommend plain carbon steel over stainless for fixed blade knives as it is easier to sharpen and keep sharp and generally performs better. In most circumstances corrosion will not be anything other than a cosmetic issue.

All else being equal a fixed blade knife will generally be cheaper and more reliable than a folding knife, having said that a knife which you have in your pocket because it is convenient to carry will be infinitely more useful than one which is in your drawer at home.

How about a multi-tool. I always carry a Leatherman Wave with me. Besides the knife, it also has a serrated knife and a saw. It's small and easy to carry on the belt. 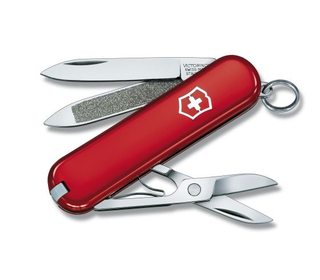 You might want to also carry of the little pocket sized wire saws for cutting wood. Neither of those is going to help you spear a water buffalo, but that's probably not something you really need to do. Realistically, what do you use a knife for in the wilderness? You use it to cut cord and bandages, to repair your gear, maybe to dig out splinters before they get infected. If you want to cut wood for fuel or shelter, you really want a saw.

The cute little Swiss Army knife and the wire saw aren't going to feel as cool as your ka-bar, but they're small and light enough to drop into your essentials kit so they're with you on every single outing, including the one where you end up needing them.

I don't have a proper survival knife but I always bring my Griptilian knife around whenever I go camping. It is a folding knife but I like the fact the it uses AXIS lock and it's well sturdy! Apparently it uses a type of metal called 154CM stainless steel. They says it is a high quality steel. I don't know much about steel but trust me, this knife is razor sharp the tough - I dropped my knife a few times and it is still very sharp.

I use a bullock knife. 24 inch blade. slight drop from the handle. 1/4 thick blue steel 4 inch wide blade. Good point on it. then a slight curve to the blade for cutting threw vines bamboo & such. Then it flattens for use as a draw knife or such. Good for splitting wood cutting vines, knoching coconut trees to climb them & drop coconuts. Same knife we use when working the watterbuffalo. For bush use. Made by Felix out local blacksmith. With a recap tire handle riveted on for non slip. But has weight to carry. Much depends on were you are & use of knife. Think large bowey knife you call them for jungle use. You can set up a shelter or build a bamboo raft with them to float back with them.

Not the answer you're looking for? Browse other questions tagged survival emergencies knives or ask your own question.

20
What to look for when purchasing a fixed blade knife
9
Is a Tanto or Utility knife best to carry when mountaineering?
12
If injured and lost, what are your biggest priorities for survival?
14
What are good baits for crabbing?
5
Tactical Folder vs traditional knife patterns for EDC
3
Can I use the blade of a multi tool as a spear point?
9
What types of food make for good emergency rations that I can store in a car?
3
Are there any large knife/saw multitools for pocket or belt use?
18
What is this sharp, curved notch on my knife for?