Should food be in a bear bag/canister even when I'm hiking?

I've read that in the western US, backpackers need bear canisters or bear bags, for bears or for other animals. For example, a post comparing different methods is here. I must admit I'm a bit daunted, because on my European trips I've never given the slightest worry to animals (food lying around right outside my tent, along with my stove). The Forest Service states that the food should be in the container whenever you are not actively preparing, eating or unpacking. Do I really need to keep my food in one of those while hiking? Are bears or other animals so agressive? 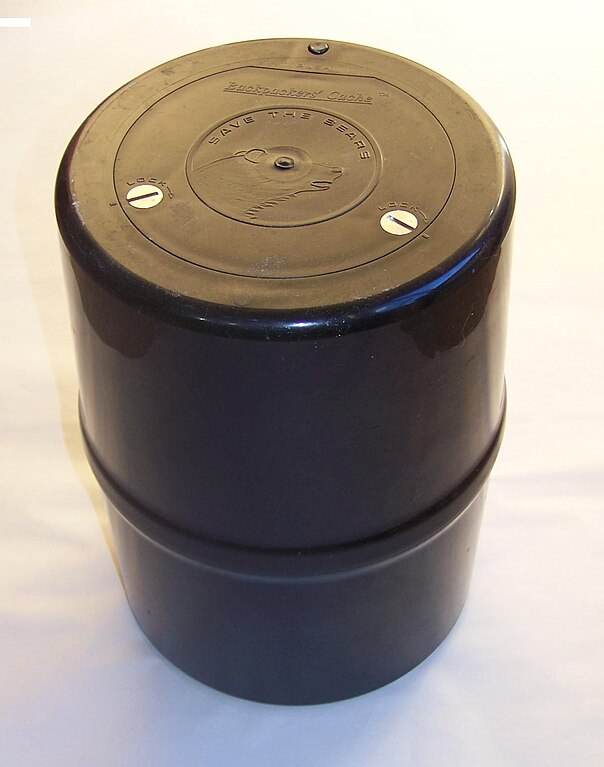 My hope was that perhaps there are foldable canisters, and while I might struggle to pack my food volume-wise, this is not a problem during the night.

Bear populations, bear problems, and aggressive bears are distributed extremely unevenly in California wilderness areas. There are dense populations of problem animals in a few small areas such as Yosemite Valley and Little Yosemite. These are areas with a lot of humans packed into a small space. You're going to the White Mountains, which gets very few human visitors, so you're not going to be in one of those areas with a high probability of bear hassles.

Yes, bears that are used to humans will definitely steal your food right away from you. I've had a bear steal my crackers when I sat down to eat them. A friend had a bear rip open his pack while it was on the ground nearby.

"Do I really need to keep my food in one of those while hiking?" This question doesn't make sense to me. You have the canister in your pack, taking up space. Why would you not put the food in it?

Bears operate more by smell than we do, so they're most likely to detect your food by its smell. You can cut down on the smell by putting all your food in ziplock bags, inside your bear canister. There are special brands of large ziplock bags such as Aloksack that are claimed to be more odorproof than normal bags. They're convenient, because they're big enough so that you can get all your food inside a single bag.

At night, simply put your bear canister at some distance, say 30 m from where you're sleeping. If a bear does find it, it may try to break into it, but it won't be able to, and you won't be up all night because of the noise.

According to Yosemite Park's website, bears have lost fear towards humans and will try to get food from whatever is the easiest way.

This usually means that it's easier to break a car's window of wreck a campsite than going hunting.

They have a keen sense of smell and will follow not just food, but products with various scents that we wouldn't think of as food. Also, they know what food containers look like and will be attracted to items they think is some sort of food wrapping.

Now, I haven't gone hiking in the western US, but my best guess would be: Since they won't fear encountering you, they might follow your scent if you're hiking. So I'd say it's better not to take risks, follow the advice, and use those canisters.

I think the regulations are so strict because the park service wants to keep a level of discipline about how hikers manage their food, so that none is accidentally left in a pack, and the oils and crumbs from food don't contaminate a pack. This avoids scenarios where food was left in a pack unintentionally.

Bears don't hunt humans except in rare cases (except for polar bears). It's not an issue of a bear attacking you personally. Rather, some bears WILL linger around campsites and wait for opportunities to steal food.

Its more that the rules are in place to ensure that a bear doesn't come into a persons camp because the person accidentally left food somewhere it shouldn't have been.

Not the answer you're looking for? Browse other questions tagged gear backpacking food bears or ask your own question.

4
Is a bear canister needed for day hikes?

7
Where to store non-food related trash in bear territory?
13
How far away should I hang my food with dry bag?
7
Can I use a tent in bear country, if I ate food in it over a year ago?
11
Proper food storage against black bears on a LONG (e.g., 14 days) trip, partly in black bear country? (enough bear canisters not practical)
19
Stoveless/fireless hiking food suggestions
8
How to retrieve a bear bag when hung with Pacific Crest Trail (PCT) method
9
What precautions should I take when cooking smelly food in an area with bears?
4
Food for desert hiking
4
Is a bear canister needed for day hikes?
11
Cooked meat/chicken when hiking